The self-described 'nobody' has ended the campaigns of three Tory candidates—and counting. He talks to Aaron Hutchins about what he hopes to achieve 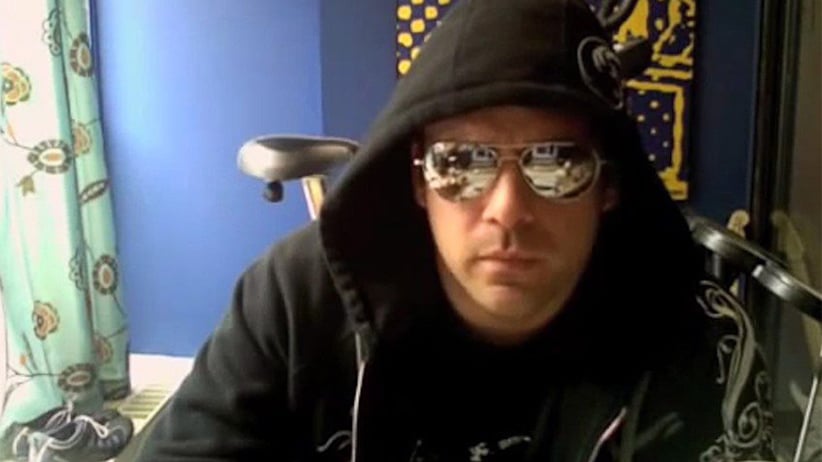 A man identified as Tim Dutaud is shown in a screengrab from a YouTube video. The Conservative Party says a man seen making prank calls in several online videos -including one where he pretends to have a mental disability – is no longer a candidate.The party says Dutaud is the same person in the videos posted on YouTube and will no longer be running in the riding of Toronto-Danforth. (CP)

It’s not just—as Robert Jago calls it—“some random political blog.” It could very well be the bane of  the Conservative campaign’s existence. Jago, a 39-year-old from Montreal who works for an education services firm, uses his spare time to dig into the social media history of Conservative candidates for the upcoming election—and there’s plenty to dig up. Earlier this month, he uncovered that Toronto–Danforth hopeful Tim Dutaud posted YouTube videos of himself making crank phone calls that make fun of those with disabilities. On Tuesday, Jago published that Blair Dale, a Tory running in the Newfoundland riding of Bonavista—Burin—Trinity, made controversial comments about women, abortion and racial minorities on social media.

Q: That’s two Conservative candidates dropped within two weeks because of what came to light on your blog

A: Three. Gilles Guibord. [The Montreal candidate was dropped in late August for offensive remarks he wrote in the comments sections of online articles.]

Q: What do you think of the party’s decision to drop them?

A: Well, the first two—Gilles Guibord and Tim Dutaud—I think it’s reasonable that they are no longer candidates. Those were people far beyond the extreme of what’s acceptable in Canadian politics. This candidate [Blair Dale], I’m not really happy he was dismissed. It actually upsets me quite a bit.

A: What he said is within the norm of what is believed within the Conservative party. It’s no different than what’s been said by other candidates. I’ve put up a post about a candidate in Toronto Centre named Julian Di Battista. He referred to women as “broads.” He posed with a gun and a target. He called Ontarians “idiots.” And he apologized in Metro and he’s still a candidate. That’s so little different from [Dale]. I wanted to use him as an illustration of what the party looks like in 2015 . . . and then they just fire him immediately. That’s crazy.

Q: But was it because of the shaming process that they had to get rid of him right away?

A: I don’t know if it’s necessarily shaming, because I went through extraordinary efforts to try [to contact him]. I contacted a local volunteer in Newfoundland. I contacted the party offices. I contacted the media. I tried to, so they could give the candidate a heads-up that this post was coming and that he should delete his OkCupid account so that he’s not humiliated. I wanted people to talk about him like they talked about Di Battista, but I didn’t want them to just chuck him or him to be humiliated.

Q: You mentioned on Twitter that he may have been let go because he was so young.

A: I think all these parties are much harsher with younger candidates.

Q: A lot of people are likely wondering: Who are you?

A: I’m some nobody, basically. I have no political aspirations. I’ve been volunterring in politics since I was a kid. My first election, when I was 19, I volunteered for an NDP minister of finance who lied for the entire campaign. After that, I volunteered with the Tories for a bit in 2006, 2008 and 2011, designing materials for them.

Q: Is this a job of yours? Are you working for someone?

A: No. This is a project. I’m a busybody. I want the electoral system to change, because it’s terrible. What the Conservatives are doing with Natives and the environment is terrible. I’m not generally the kind of person who waits for somebody else to deal with it. If I don’t like the way something is, I change it.

Q: What do you hope to accomplish?

A: I hope to move a few thousand votes in the GTA and the 905, and a few thousand votes in the Lower Mainland. I want to move those votes from Conservative switchers in those regions—people who are soft Tories who gave them a chance with a majority and who are regretting that decision now. Hopefully, if I can [change] enough votes to move one or two seats with the election, we’ll end up with a different government and a government that supports electoral reform.

Q: Why are you targeting the Conservatives when other parties might have candidates with Twitter or social media scandals?

A: The Conservative party is the only party that doesn’t support electoral reform. The NDP, Liberals and Greens each say that if they’re elected, we’ll have proportional representation or have preferential ballots. Those things will go a long way to fixing our system.

Q: You were a Tory volunteer. Why did you change your allegiance?

A: I’m a libertarian, and Stephen Harper says he doesn’t want us in the party. He had some big Christmas gala and he made fun of libertarians. He went on to pass laws that put potheads in jail, and that restrict civil liberties through Bill C-51. This group does not have any time for libertarians.

Q: Back in 2008, a Green candidate resigned because of some stuff you uncovered. Why not go after Greens now?

A: Back then, I was writing for the Western Standard, and I just didn’t like the Greens. Even now, I don’t like them. There’s a thing Natives talk about called eco-colonialism. That’s green politics. They have these policies that say that their environmental ideals trump Native rights. They want to build a green utopia on Native land. I am not a fan of the Greens at all, but I would even elect a Green government at this point, because it would mean that we would get reform to the system.

Q: Between the Liberals and the NDP, is there a party you support?

Q: You mentioned on your website that these blog posts are Phase 1 of 4. What’s Phase 2 and when does that begin?

A: Phase 2 has already begun. I’ve recruited a team of 15 people. This project is no longer just me. That group is going to be going out and doing stuff in person in the community to meet and chat with candidates. And we’re going to be posting video. Phase 3 is when we get a community of people together to write on a new site.

A: GOTV stuff: Get out the vote.

Q: Do you enjoy what you’re doing?

A: No. I’m bored to tears with jerk-off candidates. People think I’m getting some joy about finding this stuff. I don’t. But it’s a project I’m going to finish.