Rona Ambrose gets the key to Stornoway

Rona Ambrose may be the leader of the Opposition in the House, but her partner J.P Veitch will run this one 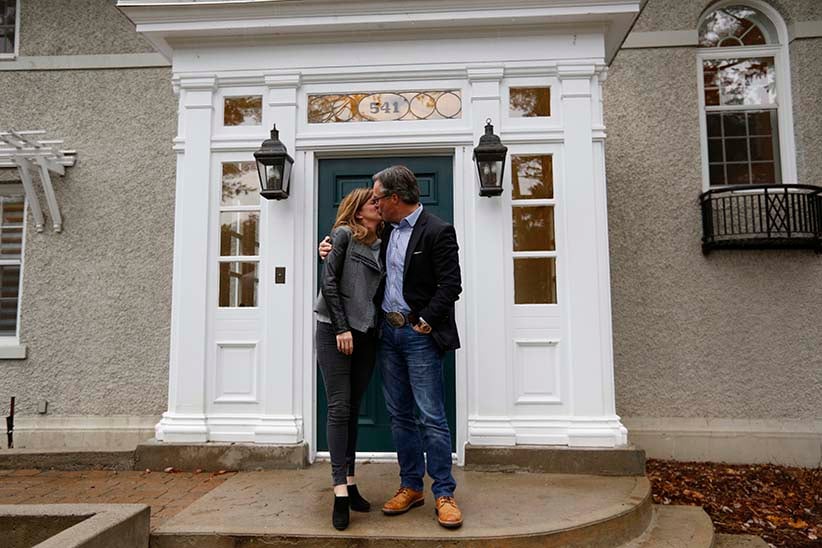 Rona Ambrose and her partner, J.P. Veitch, are in their new kitchen at Stornoway, the residence for the leader of the official Opposition. They just got the keys and have finished a tour of the 34-room, 2½-storey, turn-of-the-century stucco home in Ottawa’s leafy Rockcliffe neighbourhood. J.P.’s children, 8 and 11, have been running around seeking out Harry Potter-type cupboards as hide-and-seek spots, and choosing which of the eight bedrooms they’ll use when they visit from Alberta, where they live with their mom.

In the kitchen, conversation turns to managing the house. “This is a beautiful kitchen but I have absolutely no time to cook,” says Ambrose. “This will probably be where I will have cereal and fruit and that’s about it.” She has come full circle, from Opposition MP to various cabinet roles in government, and back to Opposition, this time as interim leader, a job that comes with Stornoway. “Should we put an ad in the paper for a wife?” she jokes. Ambrose, 46, who has been busy setting up the Opposition office, hiring staff and forming the bones of a party that will now sit across from the Liberals, has, in fact, already assigned that role to Veitch. “I left everything to him. J.P.’s the wife but he also has a really busy career in Calgary. It’s a huge amount of work for him.”

Veitch, 49, seems at first an unlikely spouse to take on hiring chefs and sorting house cleaners. Dressed in a button-down shirt, navy jacket and jeans, with a rodeo prize belt buckle, Veitch is a former professional bull rider. He has scooped multiple prizes, been a commentator at the Calgary Stampede and appeared on the Rick Mercer Report demonstrating bull riding. These days he works in technology and innovation in the oil field sector at a large private firm in Calgary. He travels back and forth between Ottawa and Alberta, where he also has an 18-year-old daughter and a home in Calgary across from the Stampede grounds.

But he appears to like the role. One of his first jobs was hiring a chef. Official residence chefs always lose their jobs when governments change. The Stornoway chef was let go and so was Tim Wasylko, who worked for the Harpers at 24 Sussex for five years and cooked a lot of Canadian fare, and a lot of meatloaf, a favourite dish for the former prime minister. Veitch hired Wasylko as house manager and chef and kept on the housekeeper at Stornoway.

“Tim was available and he’s a good guy and he’s laid-back like me,” says Veitch, who speaks to Laureen Harper on a regular basis for advice. Ambrose and Veitch say Wasylko’s job, outside of cooking for functions, will not be that onerous. “J.P., you would be happy if all we had was grilled cheese sandwiches every night. Let’s face it, he likes diner food, lots of grease, lots of french fries, burgers. I’m the opposite, lots of fresh food. I could eat a raw food diet and I’d be happy.” Veitch has lost 40 lb. since he left bull-riding and started dating Ambrose. “We eat really healthy now.” 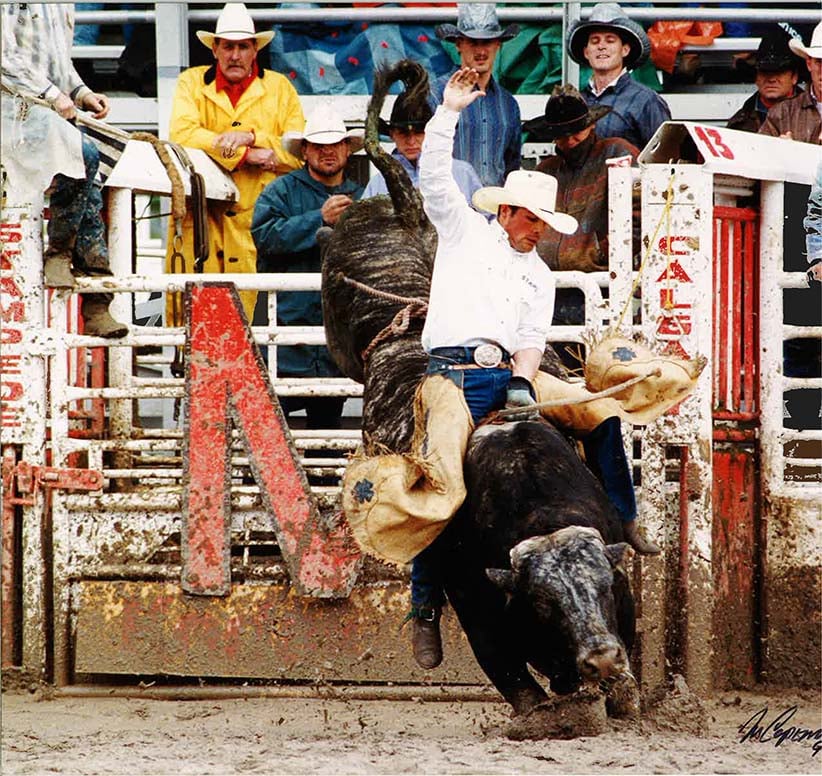 Last week, as they toured the house, Ambrose and Veitch were surprised by the master bedroom, last occupied by NDP Leader Tom Mulcair and his wife, Catherine Pinhas. It’s decorated with soft pink walls and butterfly cushions. “He must have come home and decompressed in his bedroom with butterflies on the pillows. I am very sure it was [his wife]!” laughs Ambrose.

Veitch, who will manage the house budget, says they will live with the pink room and don’t plan on spending money as they are only there for a short time, two years at most. “I don’t mind pink. I don’t need to prove I’m tough anymore,” says Veitch, who has a dry sense of humour. It’s hard to argue with him: He was the Canadian Cowboys Association 1990 bull riding rodeo champion and was invited to meet the troops in Afghanistan.

Veitch got into bull riding when he was a teenager growing up on a ranch 30 km outside of Calgary. “All the farm kids did it. We rode anything on the farm. We started riding steers in high school, college, then you are semi-pro. All of a sudden you turn around and you’re pro.” He was good at it, so he made it his career for 20 years. (Veitch’s full name is James Patrick, but he used J.P. as a bull rider and the name stuck.)

He says political life is more stressful. “Getting on bulls is easier. I’m more comfortable there.” He admires Ambrose for her job and jokes that cowboys don’t face opposition. “Who heckles a bull rider?”

One of the rare male spouses, he joined the spouses association (he is only one of two men) a few years ago and hangs out with the Conservative MPs’ wives. They go for tea and arrange charity events. He has opted out of what he calls “pyjama parties”—trips to Montreal and Toronto. He will host a party for the spouses at Stornoway when Parliament resumes on Dec. 3 and seems comfortable in this supportive role, having hosted a charity event at his Calgary home during Stampede week when Ambrose was in cabinet.

“People think it’s easy and you just come here [as an MP],” says Veitch. “But it’s not easy. For the women, my understanding, it’s about a 50 per cent divorce rate. A lot of men don’t come and support their spouses. We’re not socialized that way where the men are used to hanging out in the background.” Ambrose agrees political life is not easy for couples. “Being in politics is a lonely life, but I think being the spouse of a politician is even lonelier.

“It’s interesting. He has all these plans to really include them and make sure they have a place to go or have functions of their own. I think that’s great. A big part of my job is to entertain stakeholders and staff and members of Parliament,” says Ambrose. “That’s important in a period of transition that we have really strong, positive caucus relations.” Veitch also wants Stornoway to be more open. “It’s a gorgeous building. It’s not our house. We are the lucky ones who get to stay here. Everybody is welcome.”

The couple will only bring their personal belongings—clothes, photos—to the fully furnished Stornoway. “Everything is lovely. We don’t need anything extra,” says Ambrose.

Stornoway, which has a typical Rockcliffe hedged lawn, sprawling back space for garden parties, and separate state and private spaces, includes reminders of past occupants. There is an eclectic selection of books left behind by Jack Layton and Thomas Mulcair,  such as John Ibbitson’s recent biography of Stephen Harper, as well as a David Suzuki book they were told Harper left when he moved out. They all become property of the house. “It becomes part of the historical collection,” says Ambrose.

Veitch says he is fascinated by the history of the home. Stornoway was built in 1913-14 for Ascanio Joseph Major, an Ottawa grocer. Following the invasion of the Netherlands in 1940, the Dutch royal family went into exile and Princess Juliana, heir to the throne, lived at Stornoway for a while. Later, Lester B. Pearson and his wife were among the occupants. When Stephen Harper was Opposition leader, his aide, Ray Novak, lived in the apartment above the garage.

As Ambrose and Veitch prepare to leave Stornoway after their tour, they relax in the upper floor space that will likely become a television and reading room. Veitch’s children pick up books on the shelf. One is about the tulips the Dutch now donate annually to Ottawa as a thank-you. Another catches the 11-year-old’s eye. “You need this one,” she says to Ambrose. “That’s hilarious,” replies Ambrose, “3,500 Good Jokes for Speakers. And they’re probably clean, too.”

Veitch’s son yawns. It’s been a busy day and now they are going to Parliament Hill where Ambrose will be sworn in. The kids will catch a flight back to Alberta the next day.