Rough reception at the doors for Liberals, and a tough scrum for Jagmeet Singh 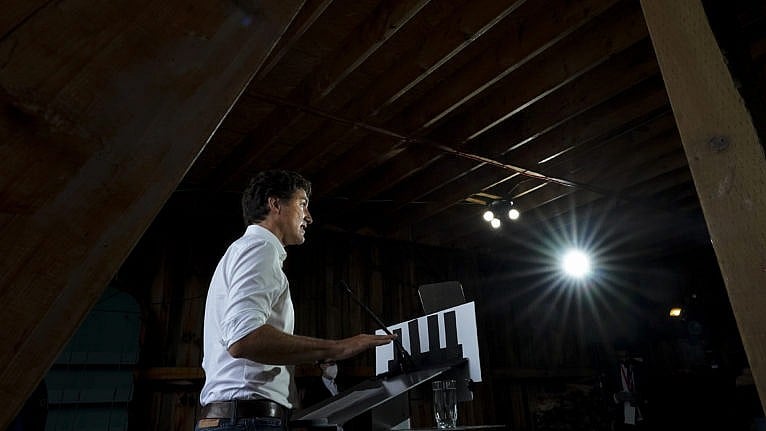 Liberal candidates and campaign workers tell the Hill Times they are getting a hostile reception on the doorsteps. An anonymous Liberal MP says “it’s a lot worse than it was in 2019.” Canadians say they’re “sick and tired” of Justin Trudeau.

Pollster Frank Graves, on the record, said a Liberal majority looks increasingly remote: “It now looks like they may not even get a minority, which would be a disaster. Now, there’s lots of room for things to turn around, but if you think that this is all going according to plan then you better have a pretty hard look at your plan because guess what, it is not working.”

Even: Abacus has a new poll showing the Liberals and Conservatives tied, with the advantage going to the Tories among those who are sure to vote. We are surely not where the Liberals wanted to be when they called the election.

Deplorables: The Liberals, no matter how desperate, should guard against trying to dig out of their current hole by trying to blame the protests on Erin O’Toole, writes Andrew MacDougall in Maclean’s.

The coming days will tell us whether the Liberals intend to try and make a ‘Basket of Deplorables 2.0’ strategy their official counter to O’Toole’s flash start. Before they do, they should remember how well it worked out for Hillary Clinton when she invoked the deplorables as a counter to Trump.

Ignoring MacDougall’s advice, on a Sudbury Tuesday night, Trudeau did link O’Toole to the protesters.

More women: The candidate registration deadline has passed, and there is some (moderately) good news, CBC reports. According to Equal Voice, 44 per cent of candidates are women or gender-diverse, which compares to 42 per cent in 2019.

Socialist O’Toole: Justin Ling, in Maclean’s, writes (tongue somewhat in cheek) that if Erin O’Toole ends up as prime minister, workers can be comforted by his socialist policies.

In his beefy campaign document, O’Toole offers a number of clever, innovative and forward-thinking policies that could be a real boon to workers in Canada—from those with strong unions to those who know the precarity of gig labour.

Ling goes through the proposals, which he describes as “serious, sensible, pro-worker, and decidedly conservative in purpose.”

They look particularly impressive when put next to the anemic New Democrat platform, which is verbose yet shallow when it comes to the tough realities facing many workers in precarious jobs across the country. Nobody can doubt the New Democrats working class bona fides, but one can wonder if they suffered from a lack of competition on that front.

Will it balance itself? On Tuesday, O’Toole was touting his plan to balance the budget within 10 years, which he says he will be able to do without painful cuts, which sounds to us like Trudeau’s oft-mocked assertion that the budget will balance itself. CP has the story.

O’Toole says that, if he elected, he will roll out more stimulus spending but will end much of it after the first year and wind it down completely over five years. Conservative officials have said the robust economic recovery on which the Tory plan rests assumes annual GDP growth of roughly three per cent, a target reached only once since 2011.

Mental health promise: Trudeau was in Kanata, Ont., on Tuesday to promise a new, permanent health transfer to provinces and territories for mental health care, at an initial cost of $4.5-billion over five years, the Globe reports. It also has background on O’Toole’s similar promise.

Tough scrum for Singh: CBC has a cringe-inducing story about an awkward NDP event last week, wherein two Manitoba chiefs appeared with Jagmeet Singh, only to endorse the Liberal candidate.

And that is Maclean’s election image of the day.

Against flipping: On Tuesday, Singh was in Vancouver to promise to crack down on “big-money” house flippers by increasing the taxable amount of capital gains profits from 50 to 75 per cent, the Canadian Press reports.

He says his plan would target wealthy speculators who buy affordable homes, renovate them quickly and resell them for profit, while using what he describes as the capital gains loophole to not pay their “fair share” of taxes. He says Liberal Leader Justin Trudeau has refused to close the loophole even though it has a billion-dollar price tag and 88 per cent of it goes to the richest one per cent of Canadians.

AFN wants flags to stay down: AFN National Chief RoseAnne Archibald said Tuesday that keeping flags at half-mast is a matter of honouring the little ones, Global reports. O’Toole said last week that Canadians “should be proud to put our flag back up.”

The AFN issued its election priorities on Tuesday, including a healing foundation for the survivors of residential schools and those affected by intergenerational trauma.

Last trip out of Afghanistan: In Maclean’s Adnan R. Khan has a harrowing story of a family’s desperate effort to get out of Afghanistan to safety in Canada, and offers insight into the position of those still stuck there.

Thousands more, including Canadian passport holders, permanent residents and Afghans approved for SIM visas—as well as those under threat from the Taliban but still looking for a path to safety—remain inside the country with diminishing hopes of escape. It’s unclear what will happen to them. Many Whatsapp and Signal groups have shifted gears from emergency airlifts to overland routes, but those remain dangerous. The Taliban keep insisting that anyone with “legal documents” will be allowed to leave on commercial flights once the Kabul airport is functioning again but no one is sure what they mean by “legal.”