Politics Insider for July 8: The Tory leader takes off his mask at the wrong moment, the Air Force needs some goats for hire, and are you ready for a fiscal snapshot? 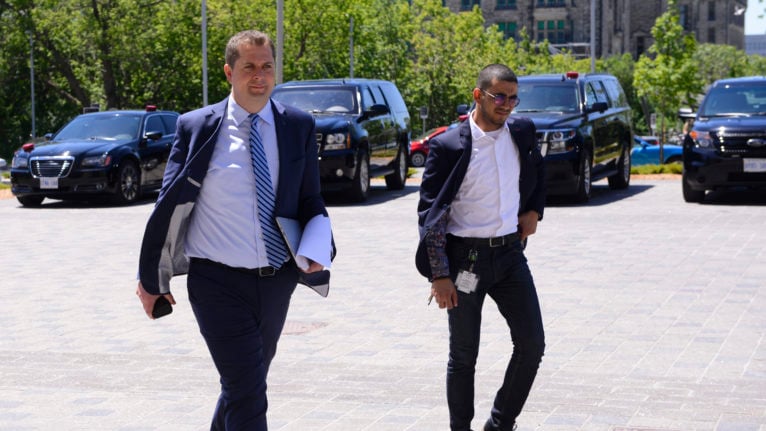 Conservative leader Andrew Scheer makes his way to the West Block on Parliament Hill amid the COVID-19 pandemic in Ottawa on Thursday, June 18, 2020. (Sean Kilpatrick/CP)

Un-masked: Andrew Scheer likely didn’t intend for Canadians to see his face as he waited to board a flight to Ottawa. But Scheer, in his last summer as Conservative leader, found his mug splashed all over social media yesterday. The Tory leader was at Pearson Airport in Toronto, sitting across from Manitoba Premier Brian Pallister. Neither wore masks, which are mandatory garb at that particular airport. Scheer’s spokesperson, Kelsie Chiasson, told CBC News that he “removed it to make a phone call. This picture must have been taken before he put it back on.” Pallister released a similar statement.

The opposition isn’t letting go of the WE controversy that keeps sprouting new stories. Earlier this week, the National Post reported that other charities were in the running to administer the $912-million Canada Student Service Grant. The feds had previously said WE was the only one capable of taking the reins. Now, the Commons finance committee will study the contract and force the government to produce documents related to the since-abandoned arrangement. And the Tories want another parliamentary committee to launch a four-meeting “emergency study” of WE’s federal dealings.

Global News reports that multiple sources described a letter apparently written by Corey Hurren, the armed military reservist who allegedly breached Rideau Hall’s grounds last week. Hurren reportedly aired a list of grievances with the federal government, apologized to his family and referenced his actions as a wake-up call. He faces 21 weapons-related charges and stands accused of uttering threats against the PM’s safety.

Curious timing: Prime Minister Justin Trudeau has a soft spot for Big Rig Brewing, a popular purveyor of craft beer in the nation’s capital. Recall the PM’s casual encounter last year with former president Barack Obama at the brewer’s Kanata location, a friendly moment memorialized in—what else?—a photo. On June 26, Trudeau was back at Big Rig to celebrate the company’s pivot to hand sanitizer production. CBC News learned that the brewery applied for and received a Health Canada licence to make the coveted sanitizer the same day Trudeau came knocking.

The rise of America’s NDP: Rick Smith, the executive director of the Broadbent Institute, writes in Maclean’s that the progressive movement made famous by Bernie Sanders and Alexandria Ocasio-Cortez is actually just one part of a “much broader ideological and generational political shift” on the American left. And some of the early momentum of third-party leftists was generated north of the border.

There is a little-known Canadian connection to these recent U.S. progressive successes. Dan Cantor, one of the founders of the Working Families Party, told me that in the early 1990s, when U.S. progressives were trying to get a WFP precursor called “The New Party” off the ground, he and a team of organizers spent a week in Ottawa learning from the NDP. “That early training from the NDP as to how to create and grow a social democratic political party was really helpful to us at a critical moment,” Cantor said.

Scott Reid, a Conservative MP for nearly 20 years, has picked sides in his party’s leadership race. Reid endorsed Leslyn Lewis. His letter, published on Facebook, praises Lewis’s patriotism and conservatism. But Reid, a Tory with an independent streak, cherishes his ability to speak his conscience. “I love the fact that when I do disagree with her, that’s okay,” he wrote. “Only Leslyn is unambiguously in favour of caucus freedom of speech and action.”

The township of Russell, Ont., isn’t going to change its name. But its council wants to find a new namesake in light of the eponymous Peter Russell’s track record as a slaveowner back when Ontario was still Upper Canada. CBC News published a story about the burgeoning saga yesterday, and only minutes later a diligent federal employee had edited Russell the man’s Wikipedia entry to add a link and the word “Legacy,” a relatively pointed term in this context, to the harmless-sounding “Later years” section. @gccaedits misses nothing. As for the township, why look any further than Russ Jackson, the Ottawa Rough Riders legend who was perhaps the best Canadian ever to throw a football?

Graze anatomy: Dave Perry, a procurement expert and vice-president of the Canadian Global Affairs Institute, found a government contract fit for herbivores. The Department of National Defence has noted that parts of its Cold Lake air base in northeastern Alberta are in need of some animals who like a crunchy lunch. The slope of certain tracts means hard-to-access areas “need to be grazed down by goats and sheep on an as and when needed basis.” The animals will also require a shepherd.

Stay tuned for more today from the Maclean’s Ottawa bureau. We’ll have our eyes on Bill Morneau‘s fiscal snapshot and the auditor general’s latest report.