Amid charges that RT spreads disinformation and has sought to influence elections, the CRTC says the channel is not under review in Canada 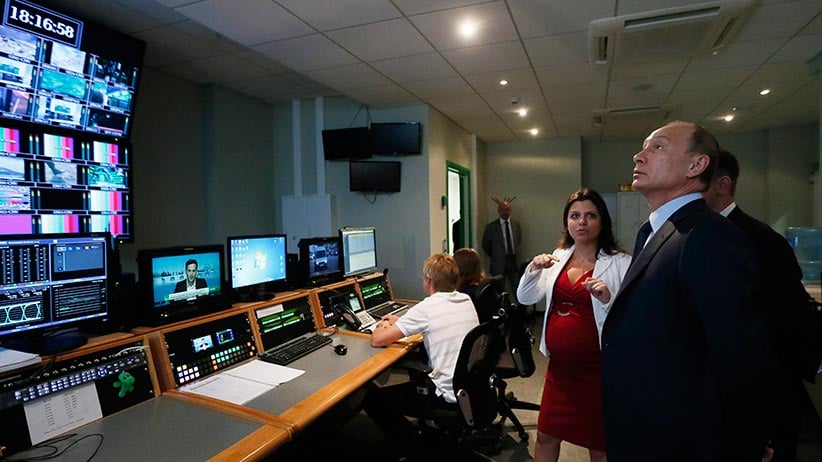 The Canadian Radio-television and Telecommunications Commission (CRTC) says it is not reviewing the presence on Canadian TVs of RT, a channel which has been labelled a propaganda tool of the Russian government by U.S. intelligence agencies and accused of spreading disinformation by French president Emmanuel Macron.

The outlet is reportedly funded by the Kremlin, and launched under the name Russia Today in 2005. The CRTC added it to the list of satellite services eligible for distribution in Canada in 2009, and the channel is currently available on all the major cable providers.

A declassified version of an assessment of Russian involvement in U.S. elections, released by the office of the Director of National Intelligence in January and containing inputs from the CIA, FBI and National Security Agency, includes numerous references to RT. The report points to collaboration between the channel, dubbed “the Kremlin’s principal international propaganda outlet,” and WikiLeaks, as well as to its positive spotlight on Donald Trump and negative coverage of Hillary Clinton.

The channel’s role in another country’s political developments has not been restricted to the U.S. The New York Times Magazine recently detailed the part RT and the affiliated website Sputnik played in furthering the false notion that German officials covered up a since-disproved rape of a Russian-German girl. The controversy led to a 700-person anti-migrant protest in front of Chancellor Angela Merkel’s office in January this year; the country goes to the polls later this month. And the digital campaign manager of Macron, who won France’s presidential contest in May, called RT and Sputnik “the first source of false information shared about our candidate.” Macron himself accused the two of being “organs of influence [and] propaganda” earlier this year.

The authors of the U.S. intelligence report forecast more international disinformation efforts. The Russian government would apply the lessons of its campaign in the U.S. presidential “to future influence efforts worldwide, including against U.S. allies and their election process,” they wrote.

Eric Rancourt, a spokesperson for the CRTC, says RT “is not currently under review, nor has it ever been under review.” Asked whether its use as a propaganda tool as outlined in the U.S. intelligence report would contravene the conditions for its distribution in Canada, he said the CRTC “cannot speculate on what might happen in the future,” noting that the agency makes decisions “based on the public record.”

Assuming the current Liberal majority holds, the next Canadian federal election will likely take place in the fall of 2019. No Canadian party has made overtures to the Putin regime in the fashion that the leaders of Germany’s Alternative für Deutschland and France’s Front National. But Minister of Foreign Affairs Chrystia Freeland is banned from entering Russia, and a recent controversy over her family history has been blamed on a Kremlin disinformation campaign. A June report from the Communications Security Establishment (CSE) did point to low-level attacks likely carried out by “hacktivists and cyber-criminals,” and anticipated attempts to influence the elections in 2019, although it did not identify specific foreign countries that may have been or may in future be involved.

Bryne Furlong, a press secretary in the office of Minister of Democratic Institutions Karina Gould, said the government takes “the issue of foreign influence very seriously.” The CSE has been in touch with political parties and chief electoral officers regarding its findings. Asked if the department was concerned that RT may be used in a future influence effort against the Canadian government or in a future Canadian election, Furlong did not respond specifically.