The portrait was paid for by the subject, writes Paul Wells 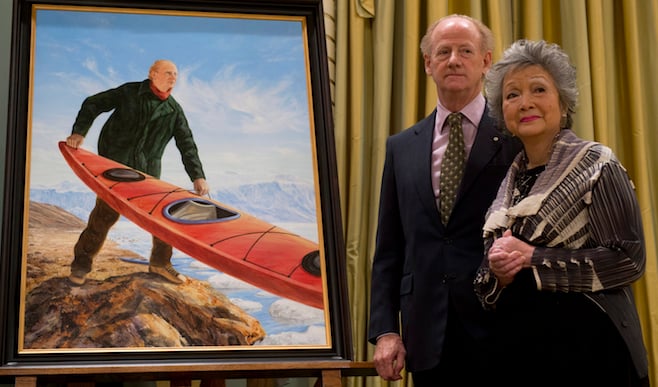 Former governor general Adrienne Clarkson stands with her husband John Ralston Saul after his official portrait was unveiled at a ceremony at Rideau Hall on Dec. 17, 2012. (Adrian Wyld/CP)

David Johnston used the word “tradition” at least three times as he introduced the subject of Rideau Hall’s latest portrait this morning. The current Governor General is a voracious reader, an early advocate of the internet, and a stickler for propriety; he will not have been unaware that advance coverage of John Ralston Saul’s portrait unveiling generated not inconsiderable online umbrage over the fact that Saul, while he may have his charms, was never the Governor General of Canada, and why are my tax dollars etc., etc., etc.

Johnston said nothing to address the monetary question, but here’s the answer: portraits of former viceregal consorts that hang at Rideau Hall, such as this one of Gerda Hnatyshyn, are paid for by the subject. As for the who-does-he-think-he-is bit, the incumbent guarantor of the viceregal office’s propriety was quick to remind the little crowd that his predecessor Adrienne Clarkson had worked with Saul in continuation of “a tradition of governors general and their spouses working together for a better country.” He then mentioned the paintings and photos of previous spouses that line the august joint’s corridors. (Gabrielle Léger, who read portions of two Throne Speeches after Jules Léger suffered a stroke in office, stands with him in his official portrait.) “Today’s portrait unveiling is a continuation of this tradition.”

Populist dudgeon thus banished, Johnston moved on to what we may perhaps call the Clarkson-Saul legacy. “In many ways it was thanks to their efforts that Rideau Hall came into its own as Canada’s house,” Johnson said. They uprooted much of the international foliage in the gardens and on the grounds and replaced it with Canadian plants. They served Canadian food, Inuit tea, decent scotch from Nova Scotia. He advocated for Canadian wine and stocked it in the cellar. Saul, who writes books, was the first resident of Rideau Hall to have been a winner of a Governor General’s Literary Award. In June during breakfasts on the garden terrace, Johnston said, he and his wife Sharon “feel so guilty because we know that at that hour, John and Adrienne would already have been up digging in that garden.”

Then came the unveiling. The crowd, which included Laureen Harper, Beverley McLachlin, Charlotte Grey, Jeffrey Simpson and a bunch of former Rideau Hall staffers, leaned forward. Just about everyone there knew the artist was Kent Monkman, so there was a lot of anticipation in the room, because Monkman is a bit of a wild man. His paintings are almost always rich with historical allegory and references to his Cree ancestry, bloody violence, politics at its most brutal, and sexuality in an exuberant variety of geometries. Saul being who he is, anything was possible.

The work itself turned out to be relatively genteel, but of course still unorthodox. It shows Saul putting a kayak into the icy water at Pond Inlet. An Inuit kayak is barely visible on the rock in the distance behind him. Later Marc Mayer, the National Gallery director, remarked mournfully that Joseph Brant was not depicted in the corner somewhere doing something scandalous. But Monkman has done that; here he shows he can work what jazz musicians would call a society gig.

Why Monkman? He has “a new and old way of looking at the country,” Saul said. “An indigenous, in every sense of the word, way of looking at the country.” Saul told some old yarns about Arctic trips, many of which featured failed attempts to get to Pond Inlet and improvised landings at secondary targets. “It’s very Arctic,” Saul said. In 2001 he spent a month at Pond Inlet writing one of those books, during which he did daily semi-official what’s-the-status-of-a-viceregal-consort-anyway events, long trips with Arctic Rangers, visits to hunters and writers, sleeping on the floor of a cabin and so on.

Monkman, an elegantly dressed and softspoken man, took the podium. “I want to thank John and Adrienne for seeing beyond the often saucy and provocative layers of my work to the deeper layers,” he said, “which can be described as a back-and-forth dialogue between two cultures and two artistic traditions.” He had proposed a couple of “saucy options” to Saul, he said, which “he graciously refused.” He’d settled on two kayaks — you do have to look for the second one — which represent the parallel paths depicted in the two-row wampum.

The speeches done, the guests munched on munchies and mingled. “I wanted to see the saucy portraits!” Laureen Harper said. “I told the Chief Justice, ‘We’re here to be offended. Let’s stand right up at the front.'” She had not been invited to the unveiling — the guest list was very old-home week for a crowd that used to be at Rideau Hall frequently in the early ’00s, including authors Émile Martel and Daniel Poliquin — so she invited herself. “I said, ‘Do you need somebody to stand and cheer?'” She liked the painting. Everyone liked the painting. The National Gallery’s Mayer, grumbling aside, liked the painting. Saul shook the hand of a former aide de camp who now commands a tank squadron at CFB Gagetown. I can’t speak for the wine but I am sure it was Canadian.