Scenes from the Stakeout at 24 Sussex

Aaron Wherry has the highlights here, but I figured that if I wasn’t going to liveblog JackWatch 2008, I may as well use my BlackBerry for something, right? 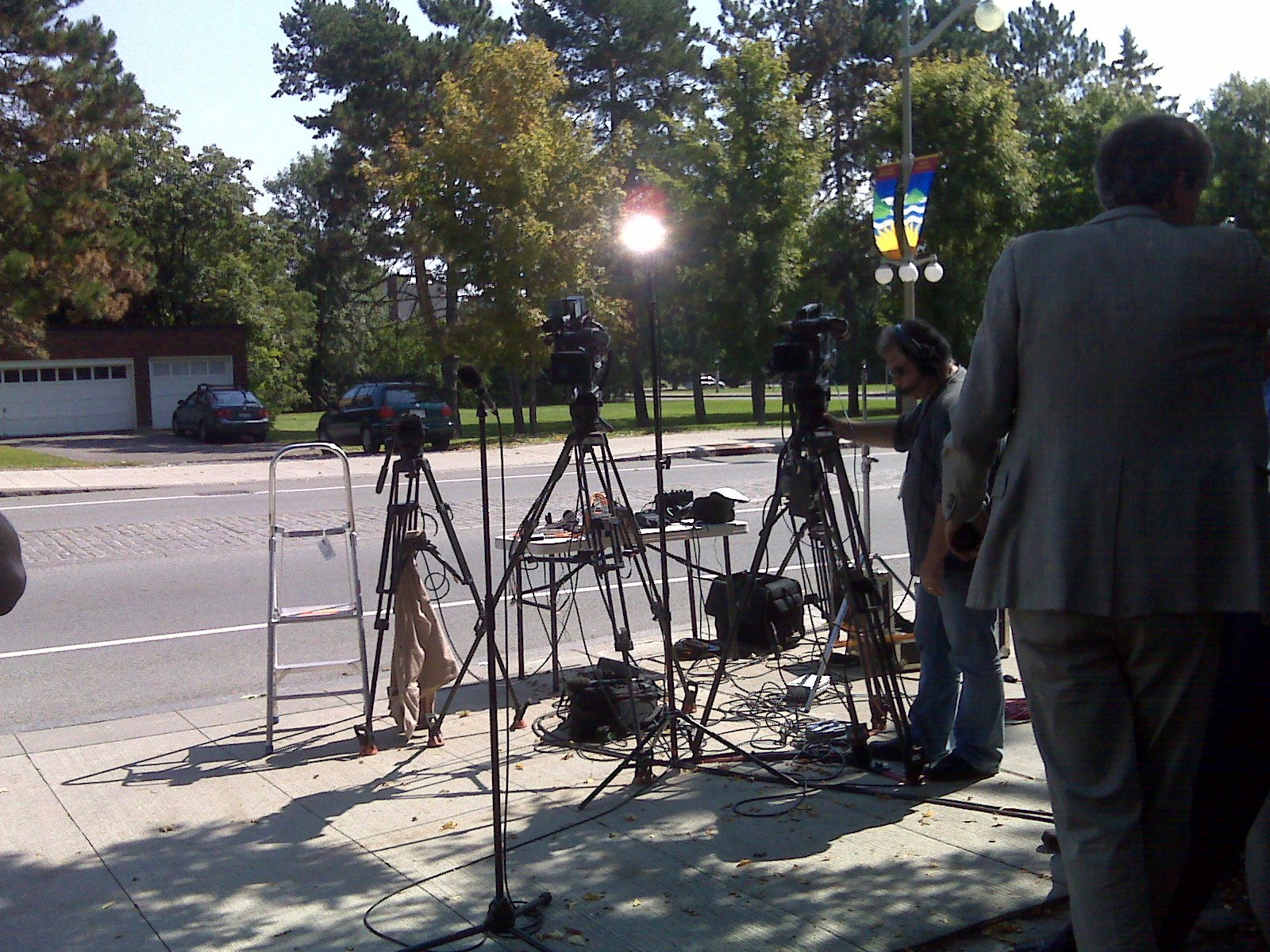 Lights, cameras, but when I rolled up, all the action was happening off screen, in the prime ministerial residence, where Stephen Harper and Jack Layton were, I suspect, sitting in awkward silence and watching the minutes tick by, waiting for a sufficient amount of time to have passed so that the latter could leave without the entire meeting looking like a waste of time. 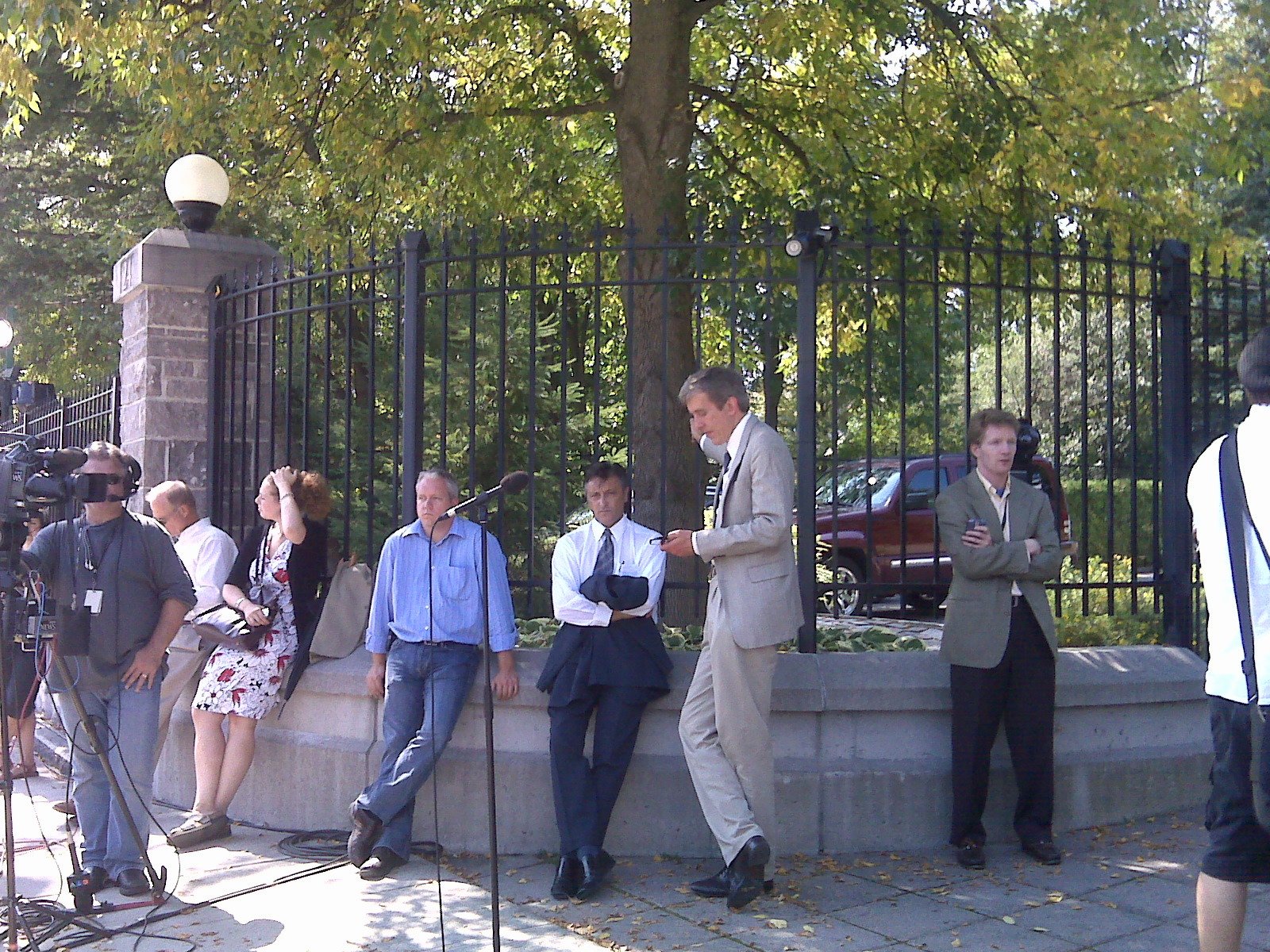 At least it was a nice day -- I mean, I doubt this is how anyone actually wanted to spend the last long weekend of the summer, but it would've been worse if it had been minus thirty. (By this point, the meeting had ostensibly been going on for nearly an hour, which was considerably longer than anyone expected.) 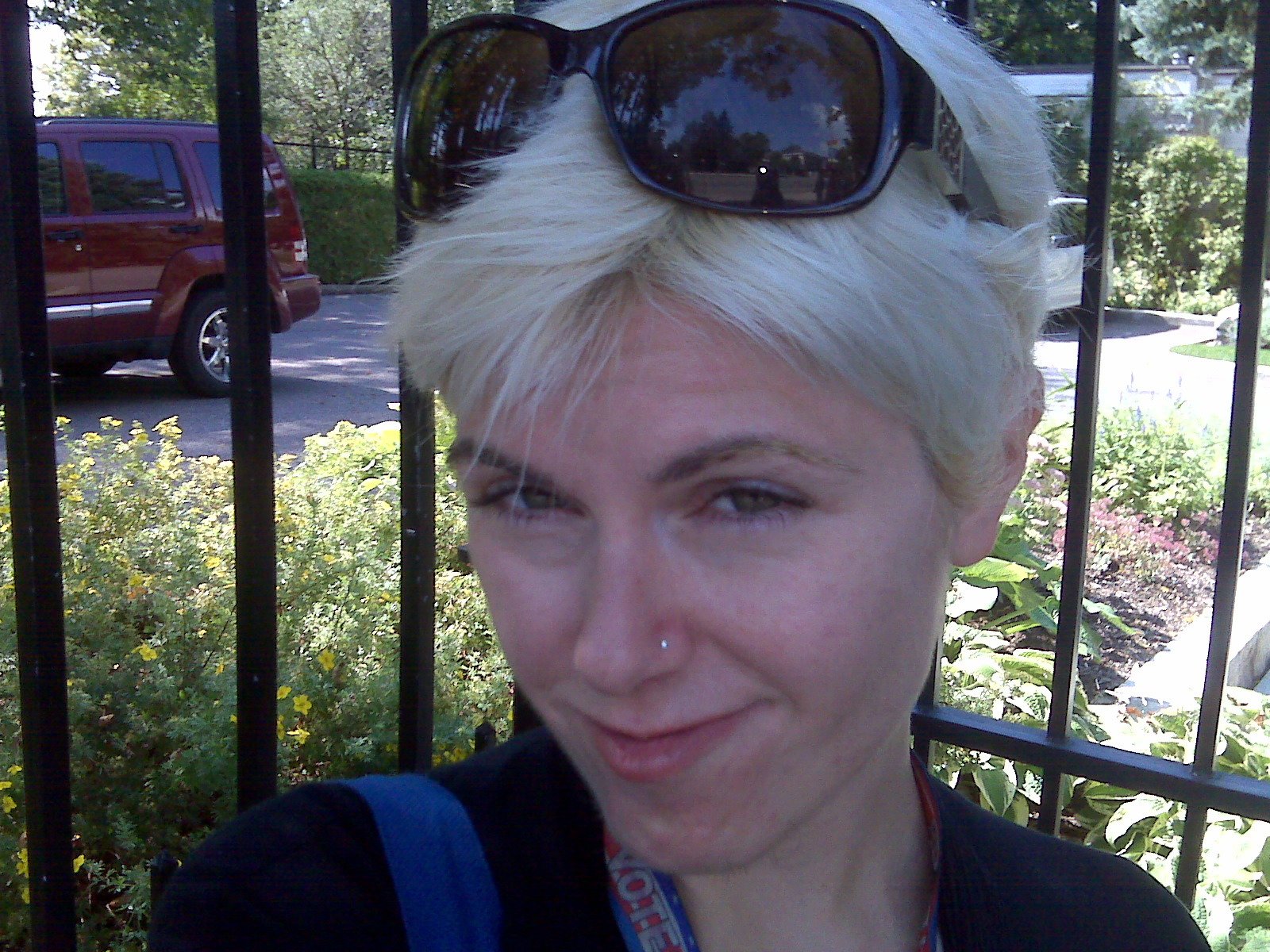 ITQ was just here as an Observer, of course, having fulfilled our daily liveblogging quota at the Elizabeth May press conference earlier in the day. 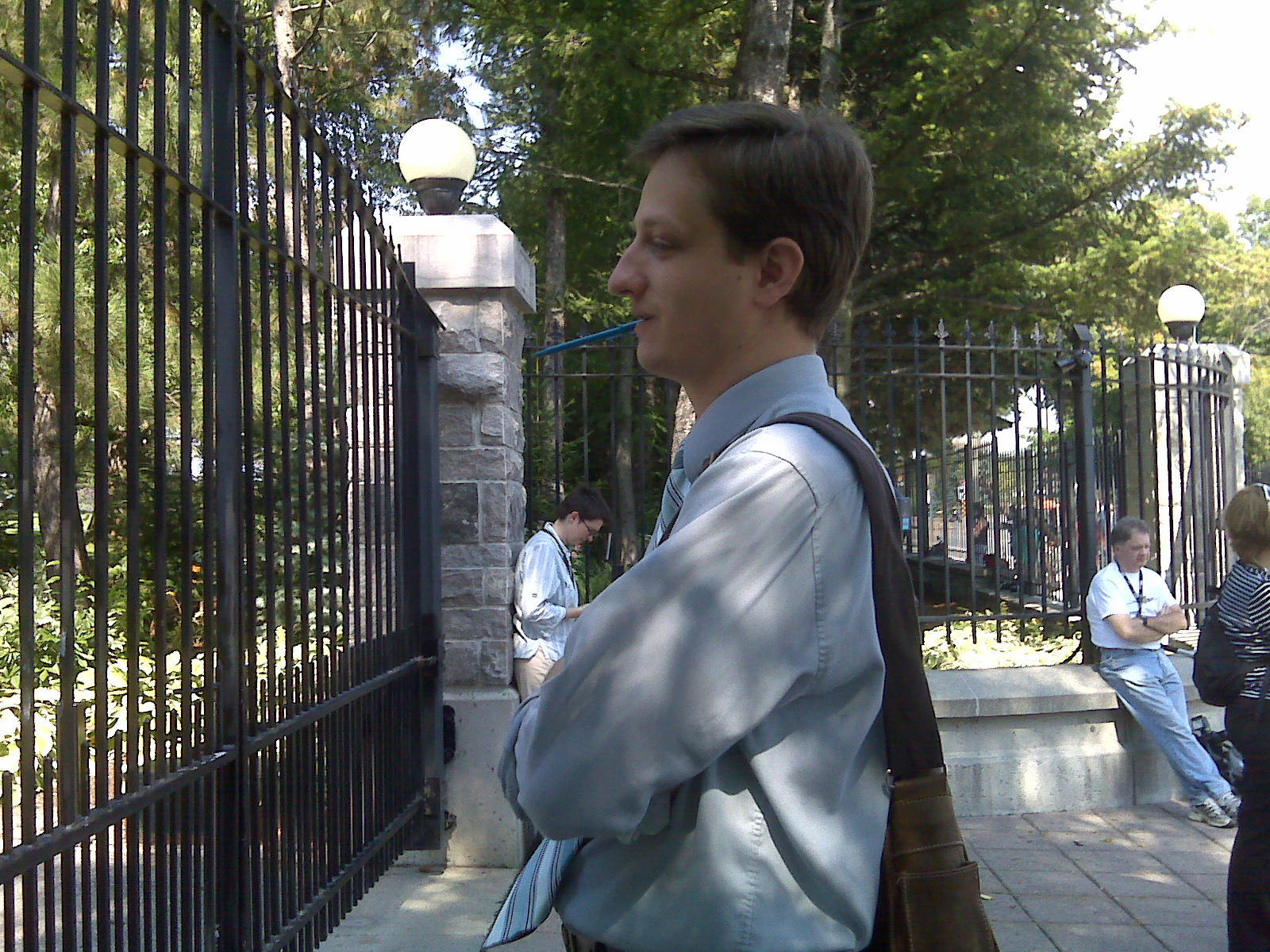 Colleague Wherry, on the other hand, was very much on the job. 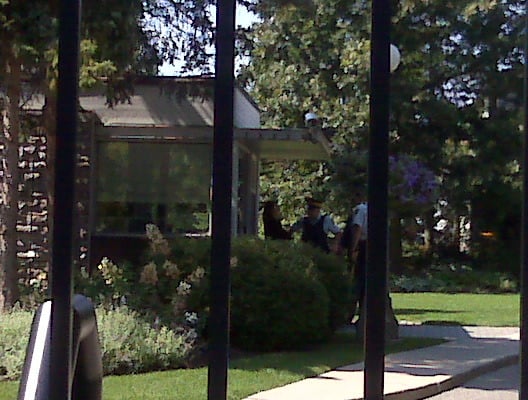 Every now and then, the security guards would huddle, thereby giving the assembled media masses sudden hope that something was about to happen. Unfortunately, in most instances, it wasn't. 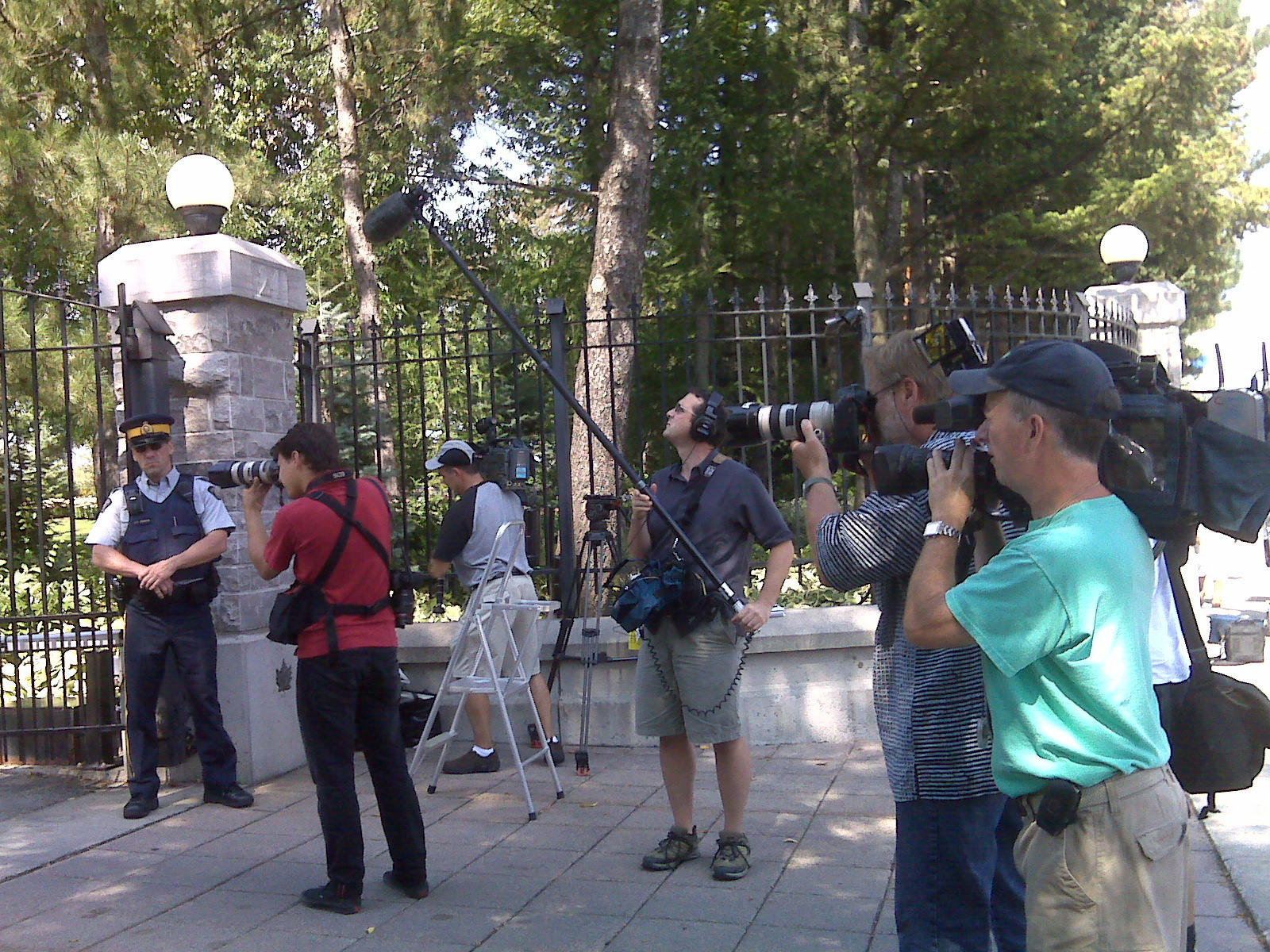 Finally, we got the two minute warning from Team NDP, who were outside the fence with the rest of us - and sure enough, along came Layton and his chief of staff, whose name, it transpired, nobody knew. I didn't even know he had a chief of staff. 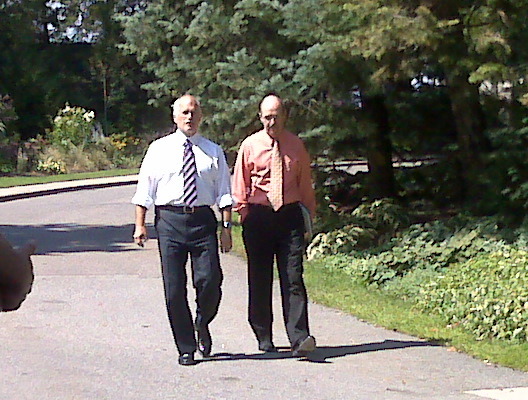 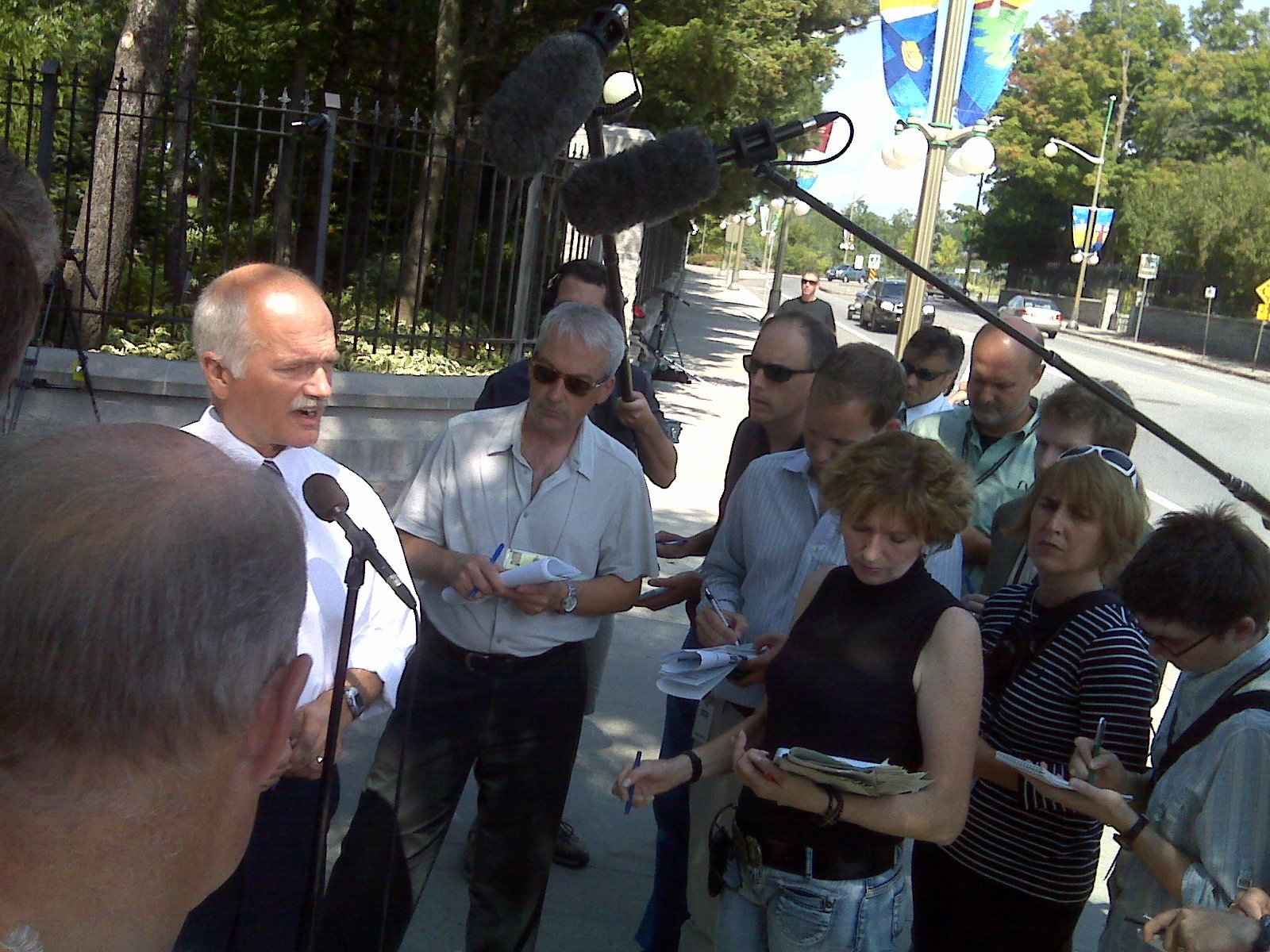 Without even the ghost of a tongue in his cheek, Layton then lamented the failure of the prime minister to recognize the priorities of Canadians, and the NDP, and once again offered to take Harper's job if he's gotten tired of it. 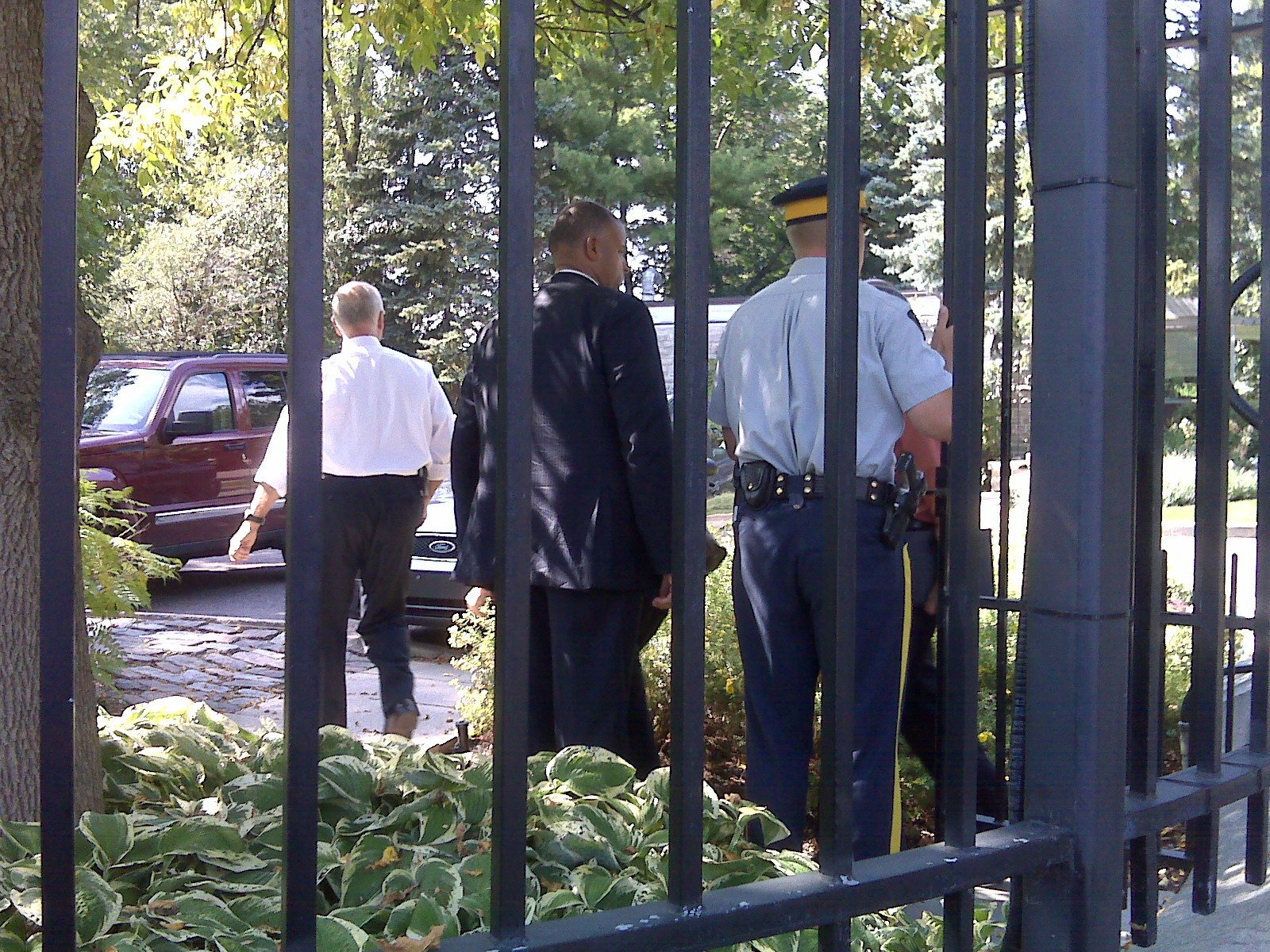 Seconds after Layton had answered one last question, and was heading back behind the wire to get in his car, we realized that nobody had asked him about Elizabeth May's latest gambit to garner a spot in the leaders' debate. 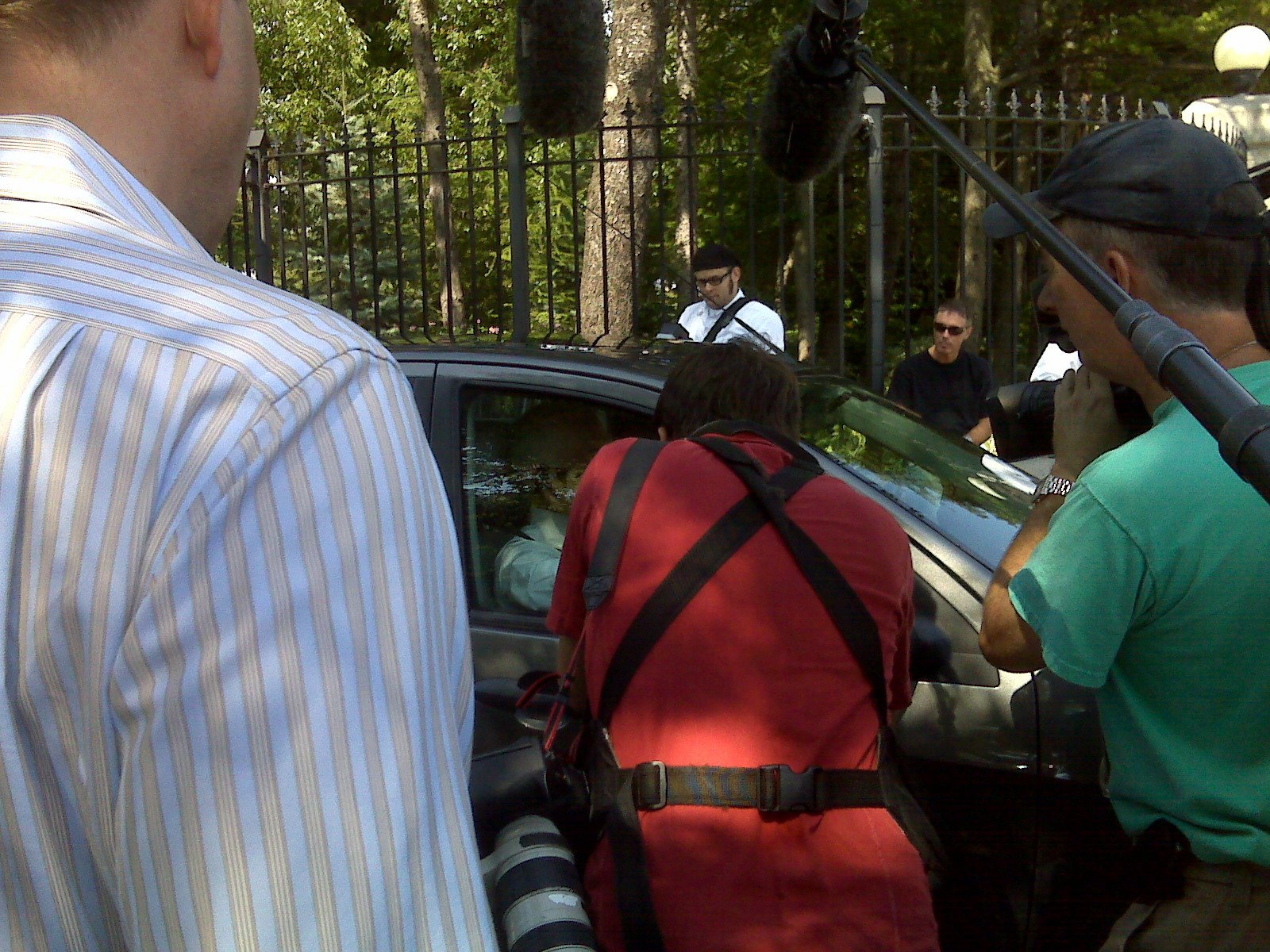 We tried to rectify that unfortunate situation as he drove off to ... wherever he was going, anyway. Unfortunately, he was on the phone, and didn't seem interested in scrumming through the window. 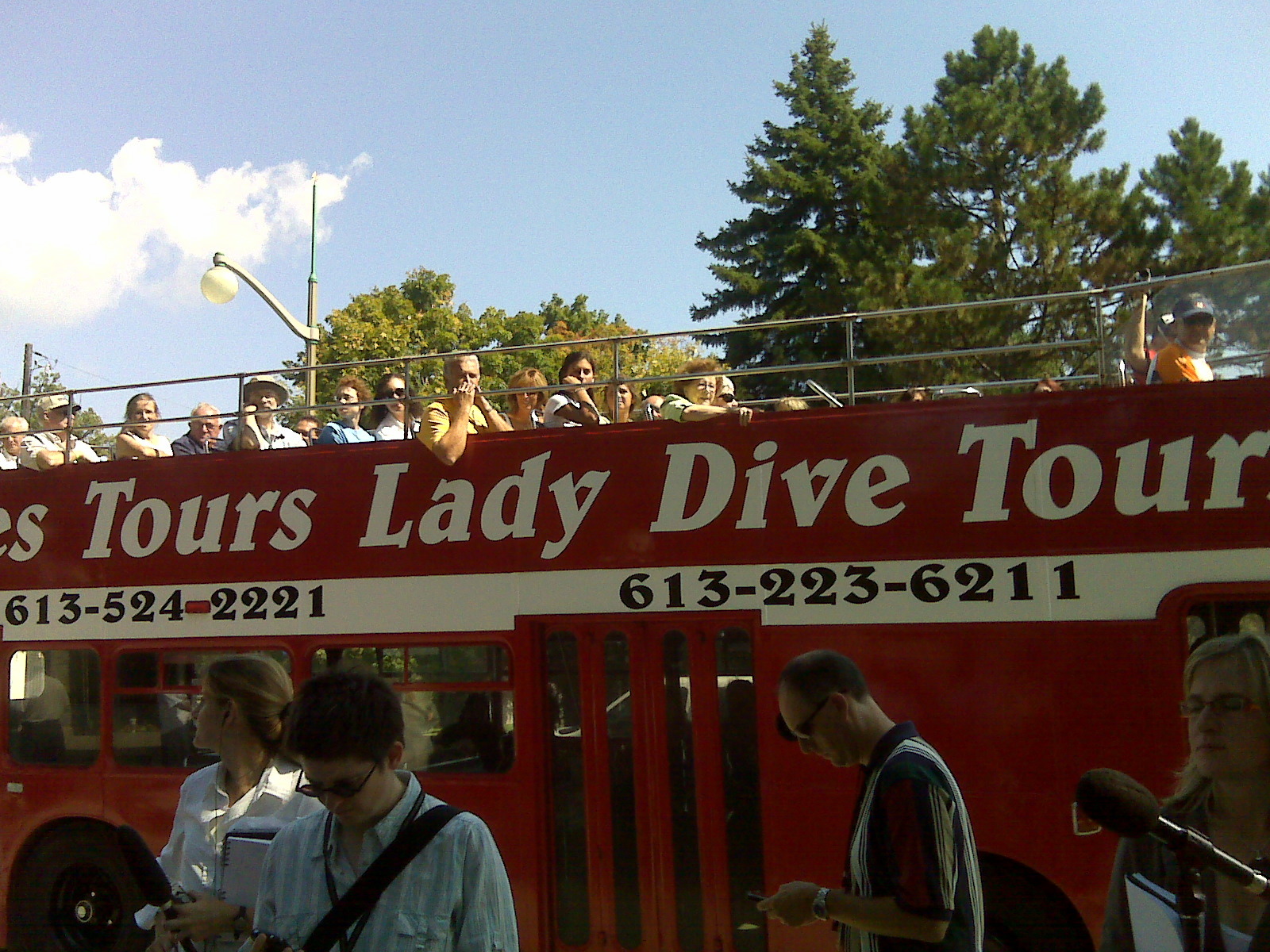 By this point, we really were becoming a roadside attraction, although at one point during Layton's scrum, a pod of motorcycles roared by, drowning out his last response in a cacophony of vroom-vroomage. 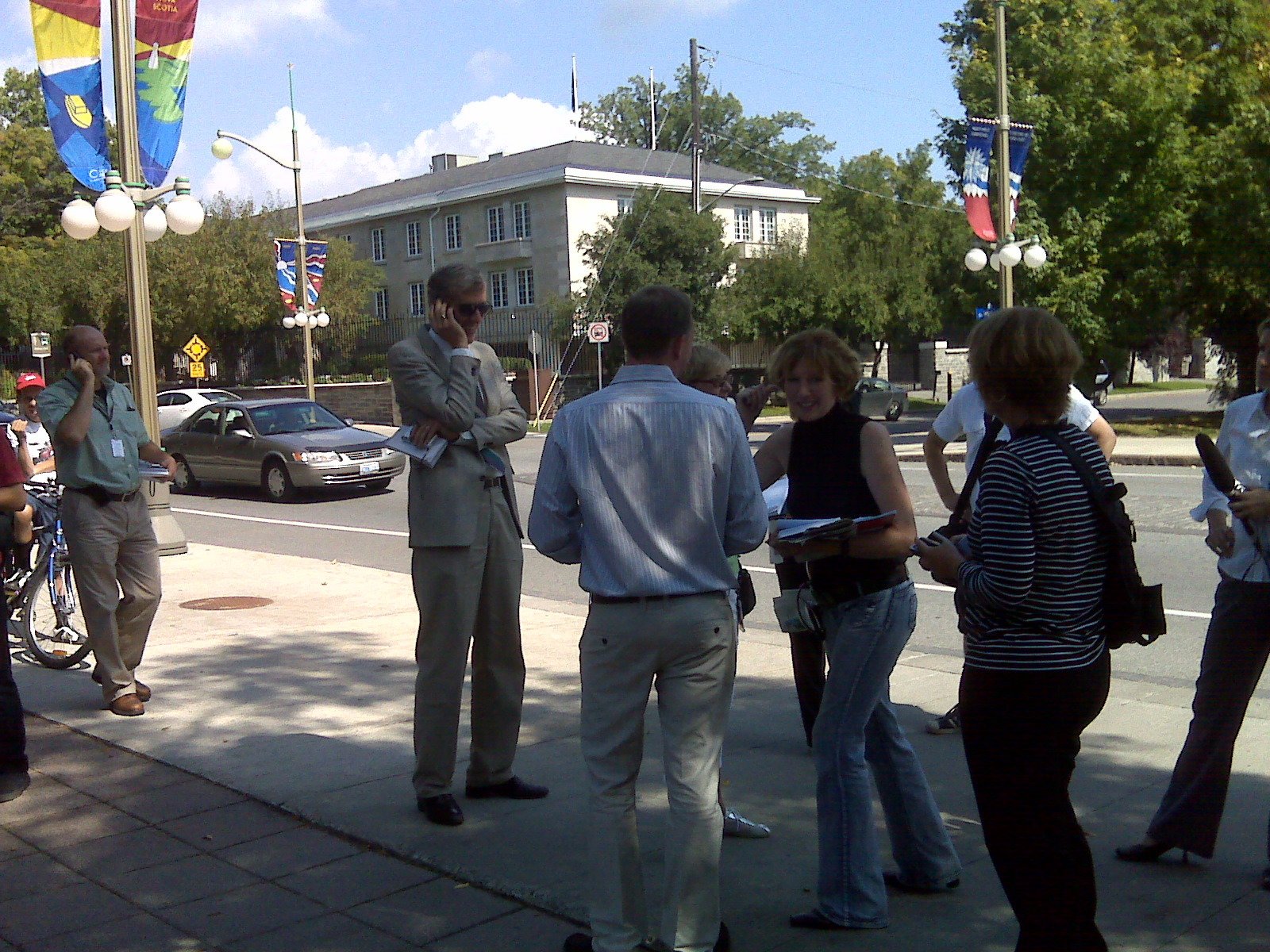 After some grumbling over the utterly unsurprising conclusion of the Layton-Harper summit, we turned out attention to a promised briefing by PMO communication <- no s director Kory Teneycke. He'd save the day from a bitter newsless fate, surely. 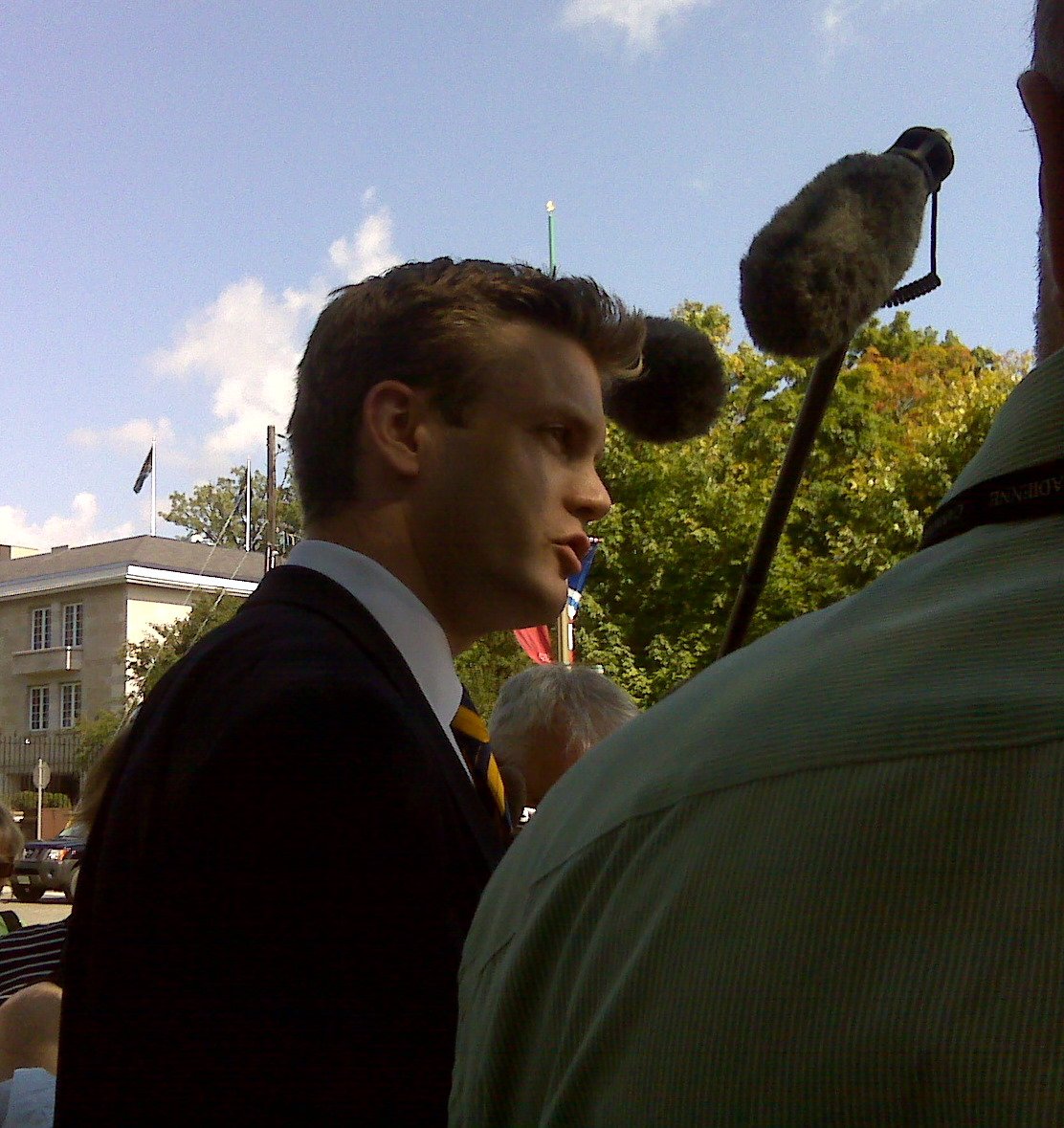 He tried, he really did - read Wherry for more details. But at the same time, you can only hear the same talking points so many times before they stop having any meaning at all. 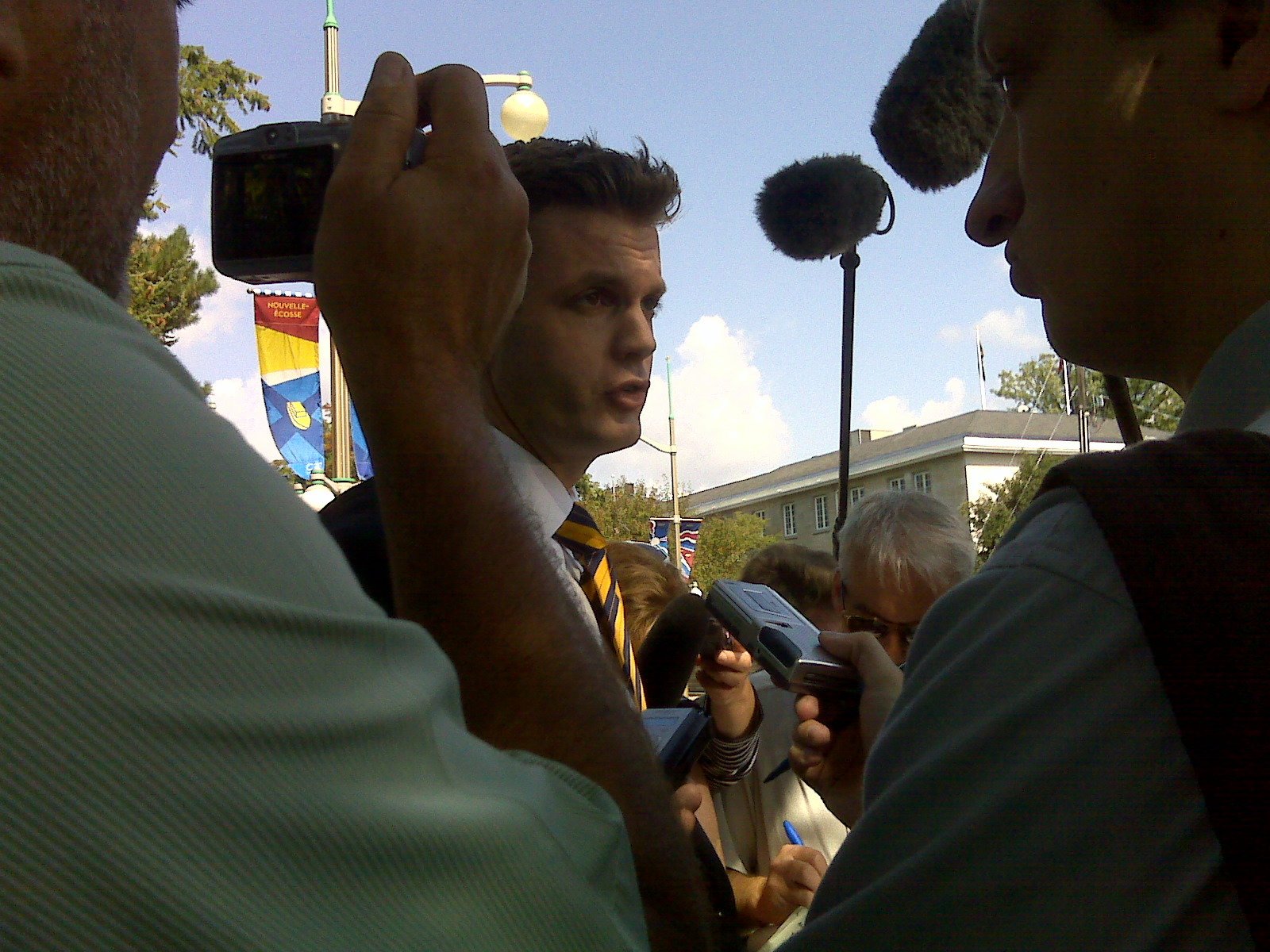 Not that this was Kory's fault -- the man tries, he really does. We did find out that the Conservatives are probably going to object to the Greens being allowed into the debates on the grounds of having insufficient hatred of Stephane Dion and the Liberals, so that was interesting, at least. 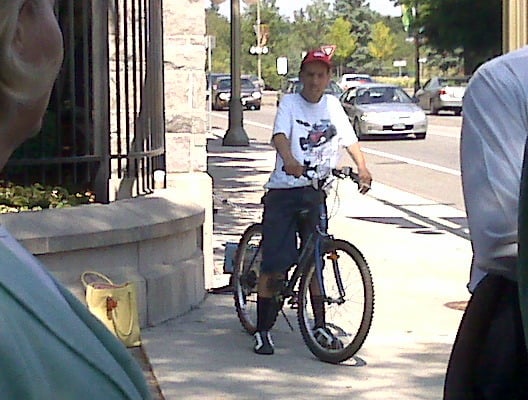 This poor guy just wanted to ride his bike down Sussex, only to find us blocking the way. 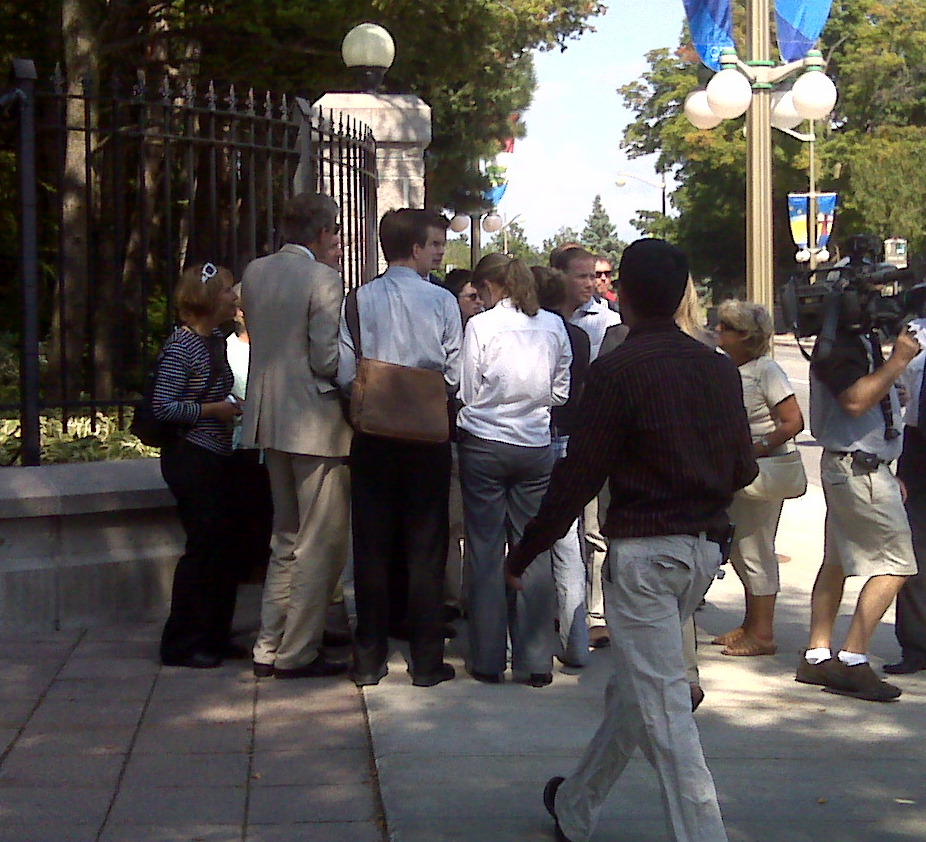 After a few minutes on camera - which, as FinalSpin has noted in a previous comment thread, may be the first time Kory has been spotted in scrum mode on live television - reporters were summoned to the far corner of the driveway for an off-the-record briefing. 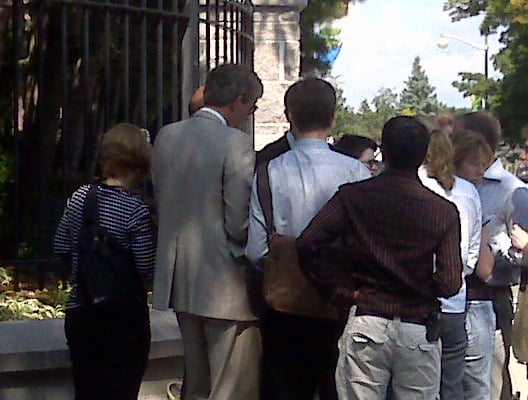 Which, as it turned out, was a perfect point for ITQ to depart, since our colleague clearly had the whole thing well in hand.