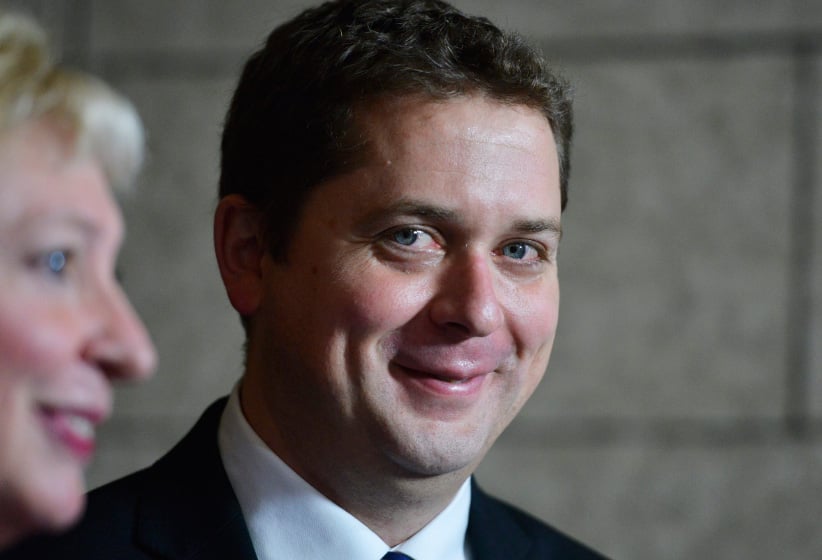 Member of Parliament for Regina—Qu’Appelle and Conservative leadership candidate Andrew Scheer wants gas pumps to display the flags of the countries where the oil came from. Scheer tweeted the idea, packaged in the form of a poll, with an accompanying video to show what the policy would look like in action.

Should the flags of the countries where the oil came from have to be displayed on gas pumps?https://t.co/g8XNiwR2cZ pic.twitter.com/qtq3EjGWKR

Here are five questions that come to mind watching this little piece of cinematic magic.

1. What happened to the Canadian flag?

Six national emblems adorn the pump in Scheer’s video. The Maple Leaf is displayed atop the screen, shamefully abbreviated on both sides such that it fails to conform to the “twice as long as it is wide” ratio prescribed by Government of Canada guidelines. An enterprising member of parliament would do well to immediately introduce a private member’s bill to request that the Standing Committee on Canadian Heritage undertake a study on proportional use of flags in campaign videos.

2. How were the other flags chosen?

Below the Maple Leaf is a row of five ensigns, which are, from left to right: the Saudi Arabian flag, bearing the Shahada and a sword in white on a green field; the Algerian flag, emblazoned with red crescent and star centred on vertical halves of green and white; the Angolan flag, bearing the a yellow half-gear, star and machete in gold on horizontal halves of red and black; the Azerbaijani flag, featuring a white eight-point star and crescent in the central band of a blue, red and green tricolour; and the U.S. flag, with 50 white stars in the upper left section atop a field of 13 alternating red and white stripes.

It’s widely know that the U.S. is the top foreign source of Canada’s oil imports, so it would appear that the video is listing countries of origin clockwise in order of amount imported. But Scheer’s list is incorrect. Here are the top sources of Canadian oil imports for 2016 from the Canadian International Merchandise Trade Database: 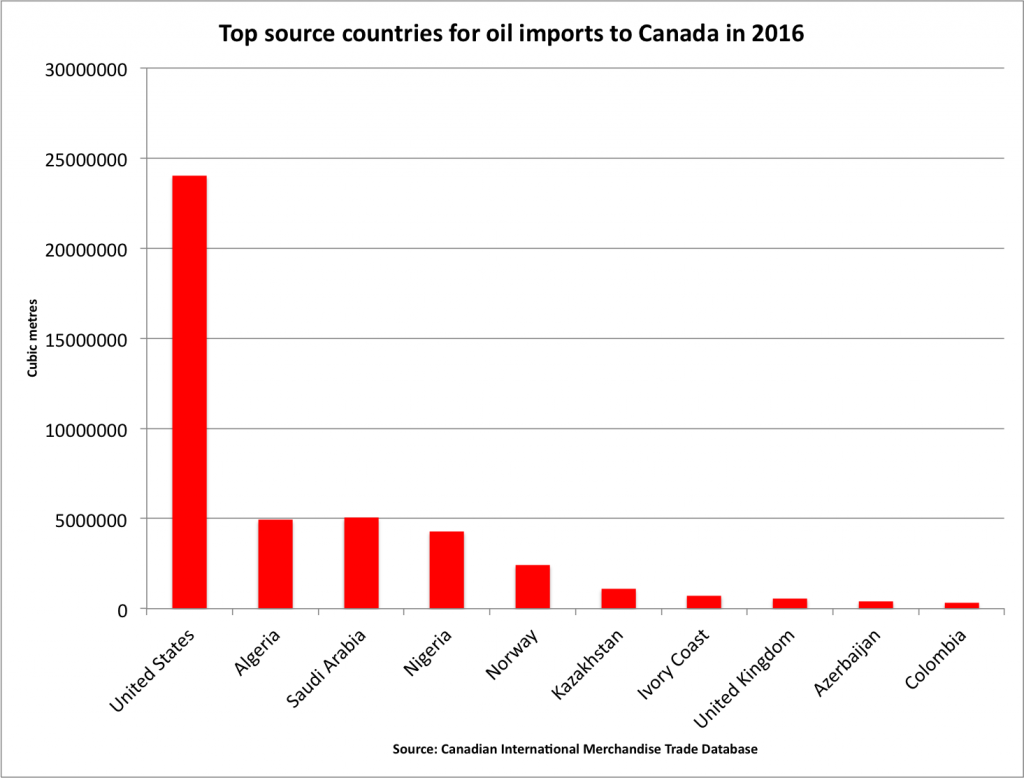 That’s a notably different collection from Scheer’s. Azerbaijan comes in at number nine, while Angola doesn’t even make the top 25. Perhaps Scheer was pulling 2015 data, when the African nation was fifth, but then he’d have to swap in Nigeria and the United Kingdom in place of Saudi Arabia and Nigeria.

Could Scheer’s choice of the four non-U.S. flags have anything to do with the fact that they bear Islamic insignia (or in the case of Angola, a crescent-and-star invoking communist symbol), during a Conservative leadership race that’s been heavy on dog-whistle Islamaphobia and anti-immigrant messaging? Surely not—Scheer is after all supposed to be in the Erin O’Toole-Michael Chong tier of likeable-enough sober second-choices. Would someone whose YouTube channel features an 18-second video of him voting against anti-Islamophobia motion M-103 really stoke nativist sentiment for political gain?

That’s three times the average $0.9813 consumers are paying at the pump in Regina, which Scheer represents part of, according to aggregator GasBuddy. But a hike in prices at the pump would be a natural consequence of Scheer’s policy. Think of the thousands of pumps that would have to be replaced, the hundreds of staff companies would have to hire to track each drop of oil from country of origin to gas station, the dozens of design consultants who would have to be brought in to get the flags just right to avoid diplomatic incidents.

Those costs would naturally need to be passed on. Surely consumers will understand that two bucks a litre is a small price to pay for knowing where your gas comes from.

Shazam identifies the soaring, sweeping background music in the video as “La Correa Del Reloj,” a track from 14 Reflexiones de Amor, the 2015 album from Juan Leal El Cascabel. The artist was born in Mexico City, according to his Soundcloud page, and can be heard live every day from 2 to 7 pm as host of El Show De Cascabel on Bakersfield, CA’s La Caliente FM 96.9.

Surely Scheer could have chosen some Canadian easy listening, like the Tenors. Or throw subtlety to the winds, and overlay the thing with “O Canada.”

5. Where’s Andy?
From earnest to odd, the waist-up, talking-to-camera style is firmly in vogue in the Conservative leadership race. Take Kellie Leitch’s eight-minute magnum opus on Canadian values screening, or Brad Trost campaign spokesman Mike Patton’s declaration that his candidate is “not entirely comfortable with the whole ‘gay’ thing.”

Scheer is conspicuously absent from his gas-labelling video. Maybe he’s busy trying to shore up his base of MP endorsements, having lost two backers and the caucus lead to O’Toole this month. But it’s a missed opportunity to show his grinning, everyman face on camera.

Correction: A previous version of this post referred to gallons as the unit of measurement for gas volumes. The correct unit is litres.