Scott Feschuk: It's not easy being a senator!

Gone are the days of bilking the taxpayer and pretend-living anywhere you want. Scott Feschuk on the eccentric uncle of our legislative family 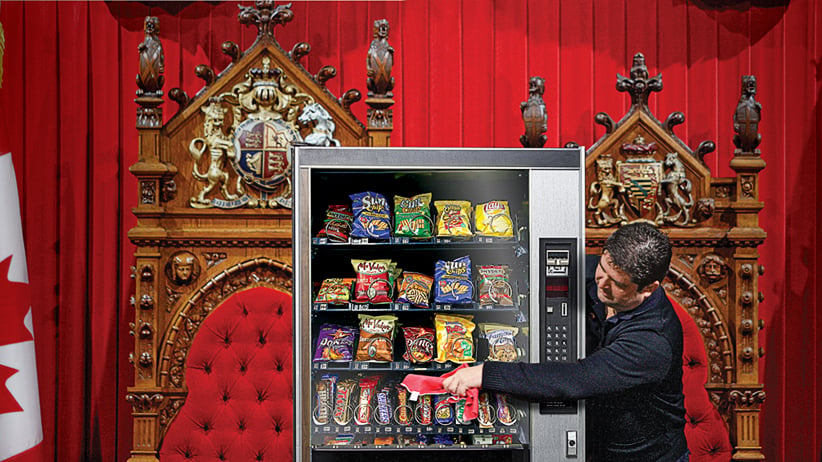 It isn’t much fun these days being a member of the Senate. You can no longer pretend-live anywhere you want. You have to submit receipts rather than guesstimates. Heck, you can’t even bill taxpayers for the ﬂights you take simply because you’re craving a bag of peanuts.

Senators used to toil in obscurity. Now they toil in ignominy. Obscurity was better! Believe it or not, the Senate used to be perceived by many as a desirable destination. Now it’s the kind of job you later delete from your LinkedIn profile.

Interview: So, there’s bit of a gap here. What did you do between 1979 and 2012?
Former senator: Miscellaneous.

Whatever you think of Stephen Harper as Prime Minister, surely we can agree he’s boned up the Senate file. Despite pledging a new way, he rewarded loads of cronies with cushy jobs. He went 0-for-3 in making the Senate equal, elected and effective. His latest gambit appears to be pretending it doesn’t exist. He hasn’t made an appointment since 2013. The number of senators is shrinking so fast, it’s more like the Red Wedding than the Red Chamber.

But those who remain are picking up the slack. This week, nine more senators had their expense claims referred to the RCMP for investigation. Others have already been suspended, including one high-profile appointee who has since gone from working at a strip club near Parliament Hill to moonlighting as referee at a recent Ottawa wrestling match, during which he was body-slammed into a table. Ladies and gentlemen, I give you Stephen Harper’s idea of Senate material.

Related: A major indictment, and a revolutionary fix

Or maybe this is just early days. Now that Harper has vowed to eliminate our dependence on fossil fuels by 2100, perhaps his next move will be to personally deliver meaningful Senate reform no later than the 2120s. Surely these will be moments of great triumph for our zombie prime minister!

(By the way, was I the only one surprised that so many media outlets took seriously this week’s pledge by G7 countries to stop burning fossil fuels in 85 years? We’re only encouraging them, you know. It’s our fault if next year’s communiqué is all about ending child poverty by the year 3000.)

I’ll be honest: I’ve always had a soft spot for the Senate. It’s the eccentric uncle of our legislative family—weird and embarrassing, but mostly harmless and usually good for a laugh.

For instance: Did you know that senators have their very own question period? They do, and it’s adorable. Each sitting day, a few senators—usually Liberals—stand and ask questions of the leader of the government in the Senate, the Harper appointee Claude Carignan. And what’s great is that everyone just agrees to overlook the fact that Carignan has zero authority to take any sort of action on any kind of file. The senators might just as well be posing their queries to a vending machine.

Senator: Why does this government spend so much on self-serving ads?
Sun Chips: [Silence.]

The results are frequently delightful. Sometimes, Carignan kind of zones out and apologizes. “I hope I didn’t miss parts of the question, because I forgot to put in my earpiece for interpretation,” he said recently. Other times, it’s senators asking the questions who space out, as in this riveting actual exchange from Hansard:

Mostly, though, they come off as little kids playing house—or, in this case, House of Commons. We’re going to stand up and ask big questions just like Mom and Dad! CAN WE HAVE SNACK NOW?

Alas, the endless expense-account chicanery and general sense of rot has many thinking of the Senate as the Chamber of On Second Thought, Maybe No.

NDP Leader Thomas Mulcair wants to flat-out abolish the place. That would be satisfying, but I think Harper is actually onto something with his current plan. Let’s sit back and let the Senate peter out. No new appointments—only retirements. It’ll be history’s slowest reality show: Last Senator Standing. The best part is that, when it finally ends, we all win.