Scott Gilmore: The issues no party will touch

How can one of the world’s wealthiest countries still have citizens living in medieval conditions? 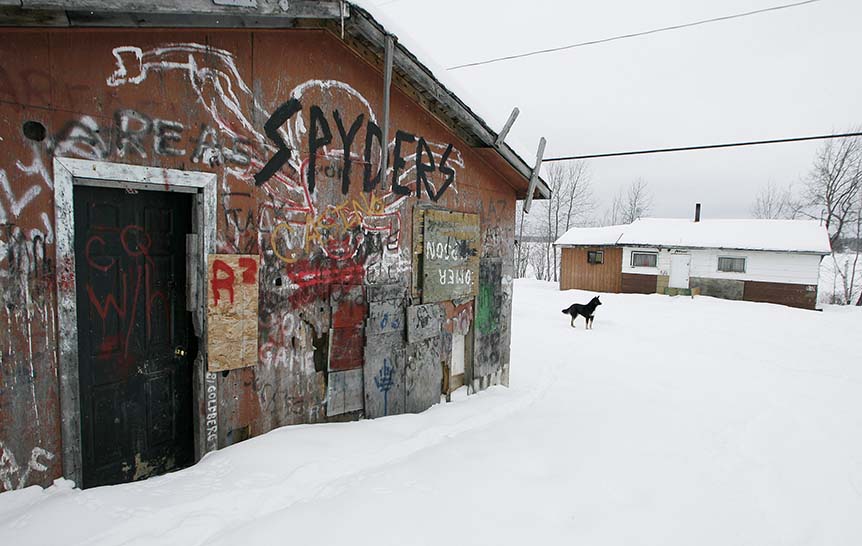 An abandoned house on the Pikangikum First Nation, a remote-access community approximately 100 km northwest of Red Lake, Ont. Half of the 430 homes are falling apart and unfit to live in, yet continue to be occupied. Ninety per cent don’t have running water or indoor toilets. (John Woods/CA)

This has been an interesting election. Of course, no one would have predicted a three-way tie. And the issues we anticipated (the economy, leadership), have largely been shouldered aside by the unexpected, such as refugees and whether the Prime Minister’s senior staff read their email.

The cliché is that no battle plans survive contact with the enemy, something that is likely being muttered in all of the campaign headquarters. But what I find most interesting about this election is what we’re not talking about. Measured by wealth, lifespan, access to education, or security, Canada is objectively one of the best places in the world to live.

Unless you’re Aboriginal. In which case, you might have been better off born in Somalia (which has a lower murder rate than on our reserves) or maybe El Salvador (which has better health outcomes). The state of the Canadian First Nations is a national shame. And yet no one in this election is asking how one of the wealthiest and safest countries in the world could still have citizens living in medieval conditions.

Related: ‘It Could Have Been Me’: Harrowing stories from Indigenous women

We are more worried about income splitting and whether this will help or hurt our “struggling” middle class. Every time I see a politician in the suburbs, reassuring the long-suffering homeowners that he knows they’re hurting, I want to grab him by the scruff of his neck, drag him out to Pikangikum in northern Ontario, which has the highest suicide rate in the world, drop him on the unpaved main street, and yell, “Focus!”

It has never been a campaign issue and I have little hope that this year will be different. No one wins or loses an election, or even a riding, on this. There may be a photo op or two, some of the leaders will announce an education program or perhaps something to do with health. But that’s it. No one will stand up and say to voters with sincerity, “This must end”—and actually have a real plan to do so.

Defence spending is also an issue that rarely wins many votes. Compared to other countries, Canadians pay very little attention to our Armed Forces. This might be because our military bases are few and far away from major cities. Or perhaps we really are a gloriously pacific people, as the political left wants to believe. So it’s understandable why this is usually not a big election issue.

But I thought this year it might be. This is the first election after more than a decade of hard fighting in Afghanistan. We spent billions slogging it out in Kandahar, losing more than 150 soldiers in the process. And what we left behind was an ugly mess at best, a barren ruin at worst. None of the political parties and, it would seem, very few Canadians, are interested in asking: Was it worth it?

Our collective desire to avoid talking about Afghanistan is probably why the Conservatives were able to cut defence spending so successfully. No one is looking. No one cares. But they have made cuts. Big ones. According to NATO, Canada is now ranked at the bottom when it comes to investing in our defence. The debate about whether Canada should be fighting ISIS is moot, considering how few resources we are able to deploy. And, as Maclean’s has reported, our Navy is now so small and ill-equipped, it is just a coastal defence force that must borrow ships from Chile in order to even conduct training exercises.

Given the Conservatives’ track record, it’s unlikely they are going to talk much about defence spending. They will continue to warn everyone that “the night is dark and full of terrors” and only they can keep us safe. But when asked how they’ll rebuild the Navy or fix procurement, they’ll have to mumble into their sleeves. And the Liberals and NDP are apt to skip this issue, too. There may be a couple of announcements, but their voters either don’t prioritize defence or, in the case of the NDP, once went so far as to support Canada’s withdrawal from NATO.

But the biggest issue we are avoiding is climate change, which, one could argue, is the single greatest challenge of the century, in Canada and globally. But our main political parties are quite happy to keep it in the back pages of their pamphlets. Mindful of a persistently skeptical and disinterested base, the Conservatives are the least likely to raise it. And while the Liberals and the NDP give good sound bites on occasion, neither party wants to dance along the high wire strung between jobs and pipelines on the one side, and significantly reduced carbon levels on the other. Announcements will be made, about reforestation or recycling, but don’t expect anyone to push this to the front of his campaign.

Two things could change all this: events, or us. As the photo of Alan Kurdi suddenly pushed the refugee crisis into the election debate, a similarly evocative moment could thrust defence, First Nations or climate change to the forefront. A more likely way to make this an issue is if we make it an issue. If Canadians called their candidates, or emailed their political leaders and said, “Enough about the lobster tax credits, I want to know how you’re going to save the planet . . . ,” we might get somewhere. There’s no harm in trying.