Politics Insider for Feb. 20: The premiers want a chat with the Prime Minister, corporate America turns against capitalism and the Tories flirt with non-confidence in the government 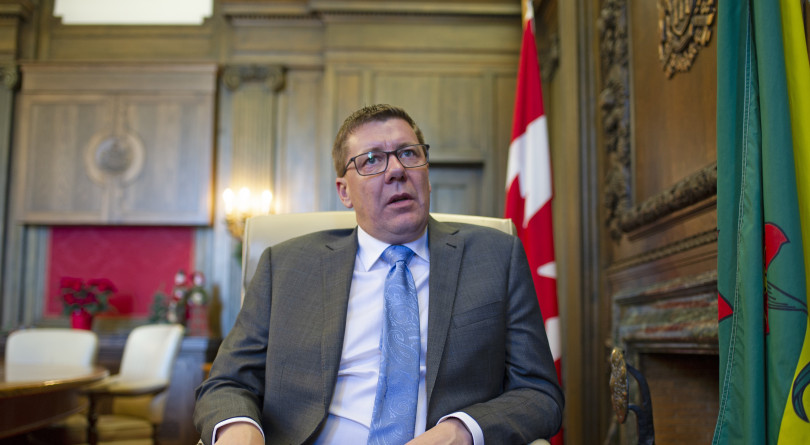 Saskatchewan Premier Scott Moe sits for a year-end interview at the Legislative Building in Regina on Dec. 10, 2019. (Mark Taylor)

Scott Moe, Saskatchewan premier, doesn’t waste a second as chair of the council of the federation, the fancy name for the premiers’ roundtable that meets every so often to attempt to reach consensus on big, urgent priorities. As rail blockades threaten layoffs, Moe took matters into his own hands: he convened a conference call.

CBC News reports a Moe spokesman saying the premiers, who did get on the phone, now want a call with Justin Trudeau in order to “discuss paths to a peaceful resolution” of the nearly two-week run of blockades snarling railways from coast to coast. Peter MacKay, aspiring prime minister, applauded some vigilante blockade-breakers in Alberta. (His tweet about it didn’t survive the night. The ratio didn’t bode well, but the internet remembers everything. Just before midnight Eastern time, MacKay clarified his thoughts.)

Grand Chief Serge Otsi Simon of the Mohawk Council of Kanesatake, who’d previously called for an end to the rail blockade on Tyendinaga territory in Ontario, retracted his comments yesterday in a news release. Simon said his earlier remarks had been misconstrued “in the service of trying to divide and conquer” Indigenous people. “It is not my place to make such judgment,” he said in a statement. “I leave it up to the people on the ground and Wet’suwet’en Nation leadership to make such calls.”

Just in case the way forward wasn’t murky enough, the Liberals also reportedly reneged on a promise to introduce a bill that would implement the UN Declaration on the Rights of Indigenous Peoples. That’s also according to Simon.

Meanwhile, several Wet’suwet’en hereditary chiefs are travelling to Tyendinaga to thank the Mohawk First Nation for their solidarity. They’ll also visit the Mohawk community of Kahnawake, which is south of Montreal.

From the inbox: A press release from Transport Action Canada, a consumer advocacy group, accuses CN of unnecessarily shutting down its rail network in the wake of blockades in some regions—and forcing VIA to shut down its own service. “This looks rather a like a hockey ‘dive’ by CN, using VIA Rail and passengers as leverage to put pressure on Ottawa and the Ontario Provincial Police to take hasty and possibly ill-considered action.” The group called on CN to release an unredacted version of its “train service agreement” with VIA — and urged Transport Canada to fight for better terms for the crown corp.

Welcome to the era of woke capitalism: Jason Kirby writes in Maclean’s that sharp rebukes of capitalism emanating from the United States in the aftermath of the Great Recession came largely from the American left. But a decade later, he writes, the discourse has gone all topsy-turvy:

There’s always been angst and apprehension toward capitalism on the left, but now some of America’s biggest and wealthiest capitalists are expressing, if not misgivings, then at least acknowledgement that American capitalism has not lived up to its promise to a lot of people. In part, the change of heart reflects a generational shift, as companies struggle to adjust to the demands of younger consumers and employees who are more concerned with problems such as inequality and climate change than past generations.

Kady O’Malley, the resident parliamentary order-paper observer over at iPolitics, first reported a potentially stunning—though likely inconsequential—development from the Tory benches. Only a few weeks into 2020 and the House of Commons has before it a motion of non-confidence in the Liberal government. (The Tories have a spate of other opposition motions that, given their current leadership vacuum, will likely see the light of day long before the Big One. Tory MP Candice Bergen called the existence of the motion “routine” during a minority parliament.)

The cheating scandal: You read here yesterday that Flavio Volpe, the president of the Automotive Parts Manufacturers’ Association and an avowed baseball fan, would have a little fun with the Houston Astros cheating scandal during his testimony on the new NAFTA. “Nobody hit the garbage bins for us” during trade negotiations, he said, referencing the Astros’ overt-covert method of stealing other team’s signs. Bravo. Watch that clip here.