If marijuana is so dangerous, as the Liberals keep saying over and over again, why is the government seeking to make its recreational use by adults easier? 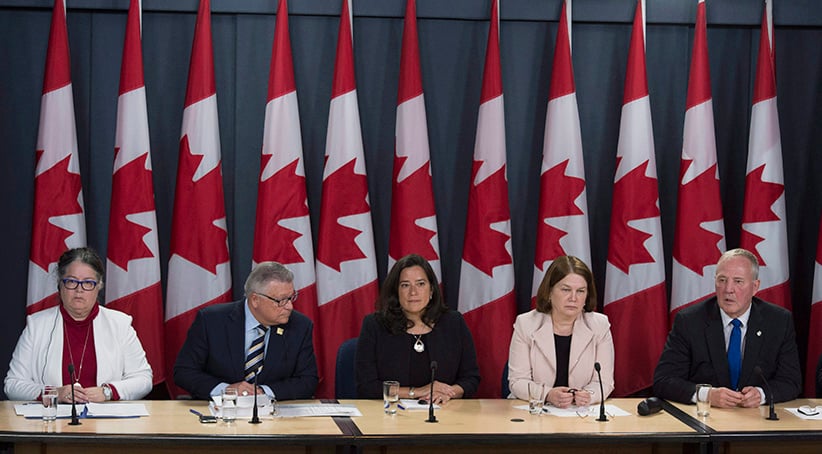 And now, an edited but faithful reproduction of the background documents the Liberals released with their marijuana bill on Thursday:

This sets a certain tone.

After reporters were given a few minutes to read the bill, federal officials from, mostly, the Health department were ushered into the National Press Theatre to brief us. One began talking. “What’s your name?” a few reporters asked. The official’s eyes bugged out in terror.

My colleagues reassured him that we would not quote him in print, an assurance that is standard practice in these so-called technical briefings. “We’ve done this before,” one said.

Thus reassured, the official and his colleagues began laying out the details of the pot law, which sets a minimum age for marijuana sales (18 years) and allows for provinces to increase that minimum; caps the number of plants per household at four and the legal height at one metre; and radically increase criminal penalties for providing cannabis to children and for driving while impaired.

Then the nameless officials filed out and the cabinet ministers, whom we could feel free to quote, filed in. Jane Philpott from Health, Jody Wilson-Raybould from Justice, Ralph Goodale from Central Casting, and Diane Lebouthillier from Unilingual Francophones.

Perhaps you will find that last joke a little harsh, but Lebouthillier was quick to correct anyone who thought she might be there as Minister of Revenue: the bill does not provide for any tax on the sale of cannabis. She was there as “a social worker by training,” and as a former secondary-school teacher from the Gaspé, where, she informed us sadly, it was easier for too many of her students to get their hands on a reefer of the marihuana than on a cigarette.

The ministers proceeded to lament the scourge of pot. They were led by their not-quite-ministerial colleague Bill Blair, the former Toronto Police Chief who has, in his capacity as a parliamentary secretary with special responsibility for not even remotely messing around, criss-crossed the country looking increasingly stern about this whole pot business. “Today is an important day,” Blair said. All of his career, he’s been trying to protect children. Today was another child-protecting day. “It is not our intent to promote the use of this drug,” he said, sternly. No kidding.

Goodale at one point sputtered as he tried to find a word for cannabis in the context of its potential transport across international borders: “This — this — this — ” he said, making helpless massing gestures with his hands in front of his face. “This product,” he managed at last.

Blair said the goal of the legislation was to ensure that henceforth, nobody could get marijuana from “some gangster in a stairwell.” This suggested that the situation has indeed deteriorated since my high-school days, when my more louche classmates were unable to locate a gangster in any stairwell and had to resort to getting their weed from so-and-so’s big brother.

The news conference was well-attended and the ministers’ time finite, so the event ended before I was able to ask my question. It would have been this: If marijuana is so dangerous — to children, to road safety, at the border and as a driver of organized crime — why is the government seeking to make its recreational use by adults easier?

Put another way: Given the Liberals’ body language, the plain meaning of their bill, and every single element of their discourse since 2016, the only part of this bill that makes no sense is the legalization part. They could strictly crack down on all the other dangers and everyday risks, with zero tolerance and harsh penalties up the wazoo, without legalizing anything. And since not one of them said anything resembling “this is a great day for personal freedom and the right of adults to exercise choice responsibly,” I honestly do not understand why they are legalizing anything.

Let’s take it a step further. I believe the only reason the Liberals have tabled this bill is that they promised to, and that they are getting a little heavily-subscribed on broken campaign promises in other domains. I believe everything from Blair’s appointment on forward is an expression of contrition for ever opening up this mess. I believe this bill, once passed, will radically increase the amount of police time devoted to measuring the height of plants, policing stairwells for gangsters, administering saliva tests at roadsides, and otherwise fretting over the demon weed. And proportionately less time doing other police work.

Which means this is the first time I’ve ever seen a government deliver on a campaign promise while flip-flopping on the policy question at hand.

It’s usually at about this point that Liberals get all huffy and say, “We always campaigned on tighter regulation. We never meant to make it easier for kids to get marijuana.” Well, sort of.  Here’s the policy resolution that made pot legalization Liberal policy in 2013. And indeed it says regulation blah blah blah children blah blah. But it also proposes an amnesty for people previously convicted of  simple possession—a sure sign that the goal of the original proposal was to increase freedom, not further limit it.

I think this bill spends so much time apologizing for its own existence that it is not at all clear why anyone would seek to operate within its regime of hard-to-procure, weak product, served with a scowl, instead of continuing to operate within the black market. If this bill becomes law, the overwhelming majority of marijuana sold and consumed in Canada will continue to be sold and consumed illegally. Not a great day at the office for rooms full of ministers and public servants. Campaign promises aren’t cheap, as those who make them eventually figure out.