Searching for the Liberal Party. Day 2.

AARON WHERRY reports from the Canada 150 conference in Montreal 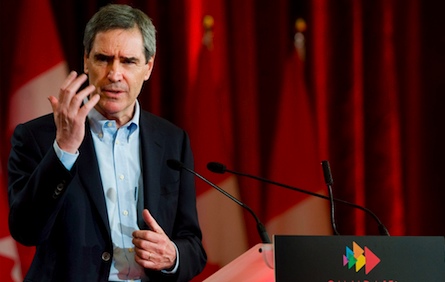 Greetings from Montreal, where, for the next three days, we’ll be hanging around the Liberal party’s Canada 150 conference. Herein a running diary of the proceedings. Day 1’s diary is here.

8:29am. Good morning. Montreal is chilly and quiet. In a few moments we will be roused by the dulcet tones of David “The Dodge” Dodge, former governor of the Bank of Canada.

8:36am. For those of you scoring at home, the colour of the lights today is orange. And the subject is Families.

8:45am. This conference was apparently the most tweeted subject in Canada yesterday. The Liberals are immensely proud of this.

8:57am. David Dodge is now growling at us. He sounds just a bit like Cookie Monster. If Cookie Monster wore a suit and was once responsible for shaping this country’s fiscal systems and regulations. This seems an ode to fiscal conservatism. Business tax rates should be reasonable, employment insurance should be reformed, we must avoid over-regulation, fiscal balance should be sought, debt must be paid down, but we mustn’t move too fast to do so. If we are to care for each other as a society, we need the income and wealth that makes it possible to do so.

9:01am. Individuals will have to save more and retire later. And don’t forget yesterday’s point about no more summer vacation. I would like to see a line graph forecasting just how much “fun” will decline over the next two decades.

9:03am. Advancements in medical technology, an aging population and greater demand for long-term care will dramatically increase the cost of health care. “We have to face up to this,” Dodge says. We could introduce new taxes to pay for health care, we could reduce services, we could introduce co-payments, we could reduce the quality of services and create a two-tier system. “There is no magic solution,” he says. “We absolutely most have an adult debate about how we’re going to deal with this.” I look forward to us avoiding such a debate for another decade until we are at a point of absolute crisis.

9:09am. The David Dodge Straight-Talk Express concludes with an extended metaphor on what a terrible table he’s set for the day and with that he invites today’s panellists to figure this all out. Cue the uncomfortable laughter.

9:24am. The NDP deftly employed quotation marks the other day to suggest there were not actually any ordinary or progressive Canadians here this weekend. It’s unclear whether Ken Georgetti, who spoke to the NDP convention in Halifax last year and is participating in a panel here now, is meant to take that personally.

9:35am. Susan Delacourt has a nice story this morning on Mr. Ignatieff and his moleskine notepads. He was up front all yesterday, and is again today, quietly taking notes. The Liberals should promise a moleskine for every child. I’m convinced this would boost our national productivity. Or at least our self-esteem. It’s impossible to carry around a moleskine and not feel like your thoughts are important and worth writing down. My egomania has improved immeasurably since I started using them.

9:50am. A gentleman in the audience suggests political parties need to come forward with “clearly defined solutions” for pension reform. We’re apparently at the point where people feel the need to explicitly request as much from their political leaders.

9:56am. A complete reimagining of the very idea of retirement is apparently necessary. In the future, we will all be more like Michael Jordan.

10:13am. Here is video of David Dodge’s remarks. The Liberals are archiving each session separately. Of yesterday’s discussions, I’d recommend Rick Miner on labour force demographics and the panel on education policy.

11:08am. An online participant wonders whether it’s time to consider greater privatization of the health care system. This is followed by a moment of uncomfortable silence from a panel that includes a former Liberal cabinet minister and three health care professionals.

11:19am. And now an attendee suggests it is time to expand public health care to better cover pharmaceutical costs. We’ve spent the past year looking on with horror as America nearly self-immolated over this debate. How confident are we that we won’t go similarly bonkers whenever we get round to having this conversation?

11:37am. Everyone seems convinced that we need to follow an “evidence-based” approach to health care. I’m not sure why this is considered something that needs to be said. Well, actually, I do understand why it needs to be said. I just find it mildly horrifying that that’s the case.

1:26pm. Sheila Watt-Cloutier begins the afternoon with remarks on the North, Aboriginal affairs, the Inuit and climate change. The lighting is now green and the subject is Energy. Which is perhaps a way of saying environment without actually using the word.

1:35pm. Ms. Watt-Cloutier suggests we are running our arctic policy by press release. She speculates that by 2017 we’ll have to have moved on from empty words. Just seven years left then. Speak vacuously now, while you still can.

1:43pm. In news not entirely unrelated to this weekend, British Prime Minister Gordon Brown has outlined the five pledges that will define the Labour platform in a soon-to-be-called election. Today’s speech is here. The slogan is apparently “A Future Fair For All.”

2:11pm. When I convene my own thinkers conference, the second day (after a day spent discussing the teleprompter’s detrimental impact on our democracy) will be dedicated to asking why someone like Kim Furlong—who moderated yesterday’s innovation discussion and could be described as well-spoken, smart, bilingual, confident, accomplished and relatively young—isn’t running for office? It’s not necessarily a bad thing that she isn’t, depending largely on your idea of who and what kind of people are supposed to occupy elected office. But it’s got to be discussed, if only because we’re so fond of regularly lamenting the sorts of people who presently occupy office. I believe there’s a Simpsons episode about this.

2:19pm. We’ve officially broached the subject of putting a price on carbon. Stephane Dion’s legacy can only go one of two ways at this point. Ten years from now, we’ll either regard him as having sacrificed his political career on a idea that was simply too far ahead of its time or we’ll regard environmental policy discussion as pre-Dion and post-Dion. Or maybe both.

2:25pm. This panel discussion on energy is drawing a surprising amount of laughs from the audience. It’s the funniest discussion of energy policy I’ve ever heard.

2:31pm. What I mean is, Mr. Dion will either be proven right or his failure will be understood as a turning point, after which the political and popular will, or the perceived popular will, moved us to figure something else out. Witness the sudden demise of cap-and-trade in the United States.

2:46pm. An entirely worthwhile discussion of carbon taxation, the relative righteousness of such a policy and the need for political courage. All tape of this discussion is going to be immediately destroyed.

3:24pm. A new panel on energy, but the carbon tax conversation has carried over, broadening into a wider debate on practical results, political realities and international affairs. Anyway. Here is what this weekend is increasingly coming down to. There are any number of real, potential or forthcoming problems. There are any number of solutions and, however dire the worst-case scenario, the best-case scenarios are enticing and perhaps even feasible. And all of the problems and solutions are, ultimately, connected. All that’s lacking is the direction, organization and persuasion necessary to achieve power and implement any of it. Over to you, Mr. Ignatieff.

3:36pm. Panellists keep referring variously to the “elephant in the room.” I’m not sure there are any elephants in the room. I think they’ve all been readily identified and agonized over.

3:42pm. Finally, a plea for the electric car. On that note, I’m going to excuse myself and skip out on the day’s last session. My interest in a mature and nuanced discussion of public policy apparently has its limits. This evening there’s a dinner for reporters at a local bistro of some sort. There we will be told with which adjectives we are to describe this weekend’s proceedings.