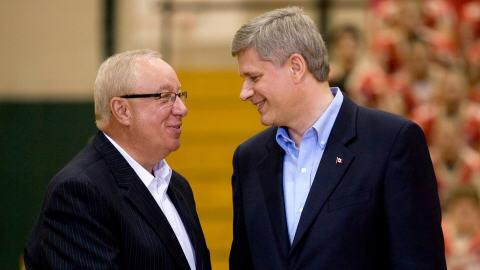 MONTREAL — Sen. Jacques Demers remains in a Montreal hospital in what one colleague described as “serious but stable” condition after suffering a stroke.

Claude Carignan, Conservative leader in the Senate, said he spoke with an assistant to Demers and was told the 71-year-old, former NHL coach was conscious Thursday morning.

Demers, who coached the Montreal Canadiens to their 1993 Stanley Cup victory, is a patient of the team’s current doctor, David Mulder.

Mulder, along with hospital staff, was monitoring the senator’s condition and trying to stabilize him, Carignan said.

“He’s in good hands,” said Carignan, who was appointed to the Senate alongside Demers in 2009 by Stephen Harper. “I am convinced that with his strength, he’ll come back to us fully recuperated with all of his energy.”

Carignan and Demers remained friends even after Demers quit the Conservative caucus several months ago to sit as an independent.

At the time, Demers said he was uncomfortable with some of the machinations involved in the Senate expenses scandal and chafed at having to vote the Conservative party line.

Demers suffered a concussion last spring after a fall and took several weeks off to get better. Carignan said his friend came back from that injury in full form.

Demers is widely liked within the Senate, getting along with everyone from politicians to the staff who keep the place running. He still gets called “coach” by fellow senators.

Since joining the Senate, Demers has been an advocate for literacy and education, even reaching across the aisle to promote work by Liberal senators. Whether it was literacy or domestic violence, Demers always talked about an issue intellectually and with a personal touch because his mother was abused and he is dyslexic, colleagues said.

“Because of who he is, it elevates his ability to draw attention to the message and I think he’s done that,” said Senate Liberal leader James Cowan.

“He has a passion about him that is certainly infectious.”

A number of public figures, the prime minister among them, responded to the news of the senator’s stroke.

Former Canadiens forward Vincent Damphousse, who works with Demers as a TV analyst, called him “a kind of father figure” on the panel.

“He’s the same guy you see on TV that you see outside,” he said. “There’s no facade. No mask. We all wish him good health.”