No investigation was ultimately opened on Sharon Carstairs, whose legal fees were almost 11 times the amount questioned 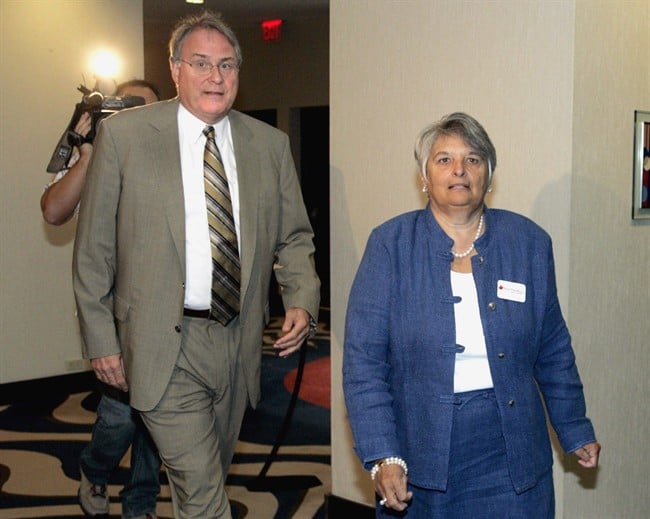 Liberal leadership candidate Ken Dryden left follows Liberal Senator Sharon Carstairs into the final day of meetings of the liberal caucus in Vancouver, Thursday August 24, 2006. Former senator Carstairs says the Senate should cover the legal fees she incurred after she was named in a critical audit of spending in the upper chamber, then cleared of any wrongdoing. (Chuck Stoody/CP)

OTTAWA – A former Liberal senator says the Senate should cover about $82,000 in legal fees she incurred after she was named in a critical audit of spending in the upper chamber, then cleared of any wrongdoing.

The only questions Sharon Carstairs faced in the auditor general’s review released two years ago were about her primary residence and $7,528 in living expenses that landed her case before the Mounties.

As with the other 29 senators named in auditor general Michael Ferguson’s report, the RCMP found no reason to conduct an official investigation into Carstairs’s spending and the Senate decided not to take her or any other senators to court to recoup the questioned expenses.

But from the moment in June 2015 that she was told her file had been sent to the RCMP, until the threat of a lawsuit was dropped, Carstairs says she needed a lawyer to help her through a process that seemed at times neither open nor transparent.

She told the Senate’s internal economy committee, which is tasked with oversight of Senate spending and such requests for financial help, that the upper chamber should cover her legal fees, which were almost 11 times the amount that Ferguson questioned.

The Senate ordinarily doesn’t cover legal fees where a senator is the subject of a criminal investigation, or criminally charged. But Carstairs argued Thursday that the situation she and other senators found themselves was hardly ordinary: “This was the Senate threatening to sue a former senator and the threats continued despite clear arguments put forward by my counsel.”

Senators on the internal economy committee left the door open on her request and are delaying a decision.

The committee had previously denied a similar request by Sen. Mike Duffy. The Senate did cover almost $102,000 in legal fees for five senators who went through an arbitration process.

Carstairs’s appearance before the committee dredged up the spending scandal that finally fizzled out last year, highlighted by the dramatic verdict in Sen. Mike Duffy’s criminal trial, which cleared him on 31 charges stemming from his Senate expenses.

Carstairs left the Senate in 2011, two years before the upper chamber called in Ferguson and his auditors to pore over every bill that had been filed between April 2011 and March 2013. For much of her 17 years in the Senate, Carstairs taught rookies about expense rules.

When she retired, Carstairs said she asked the Senate’s finance department if she should keep her spending records. The response was she could shred the documents because there hadn’t been an issue with her spending over the years.

After going through Ferguson’s audit, Carstairs was told on June 5, 2015 that her file was being sent to the RCMP for review over questions about her declaration of primary and secondary residence. Ferguson’s report questioned whether she lived primarily in Manitoba, even though, Carstairs said, she had a Manitoba driver’s license and health card, and paid taxes in the province.

The questions were the same ones Duffy faced during his criminal trial. When he was cleared in April 2016, the judge in the case had “eviscerated” the Senate’s housing rules, Carstairs said.