Setting the table for Trudeau's dinner with the premiers

Premiers will meet with the Prime Minister on Monday for the first time since 2009. Top of the agenda: climate change. 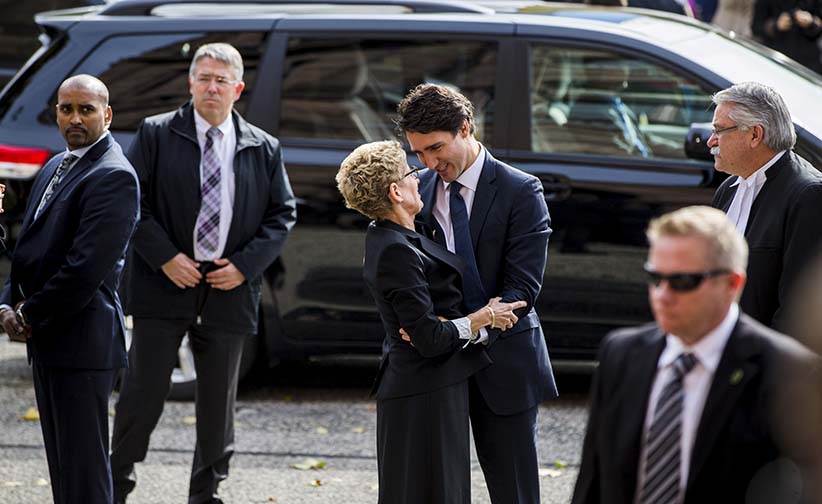 If properly dealing with the spectre of climate change were as easy as changing the sign outside the minister’s office, surely one of the last few prime ministers would have done so before now. The Liberals came to office sounding much as the Conservatives did in 2006, lamenting their predecessor’s inaction and vowing new efforts to reduce greenhouse gas emissions.

Three weeks after being sworn in, Trudeau will gather the premiers in Ottawa on Monday to discuss climate change at a “working dinner” that could begin to provide the sort of answers a new ministerial title promises—including the enduring question of whether Canadians are ready to seriously confront climate change.

“We have momentum at the political level, with all orders of government. We’ve got momentum in the sense of Canadians being supportive. And we’ve got an international process that’s driving a structure that all countries can participate in,” says Louise Comeau, executive director of Climate Action Network Canada, a coalition of environmentally concerned groups. “I think we have a window that hasn’t been open in a very long time.”

Related: David McLaughlin on whether Trudeau can nail down a climate deal

Trudeau’s move to quickly convene the premiers contrasts with Stephen Harper, who last brought the first ministers together in January 2009. But Trudeau will go to the UN climate conference in Paris—the premiers, opposition leaders and Indigenous leaders in tow—with the climate commitments of the Harper government. Further negotiations with the provinces after Paris will determine a new target. Catherine McKenna, the minister of the environment and climate change, has said that the Conservative target—a 30 per cent reduction in greenhouse gas emissions below 2005 levels by 2030—represents the “floor” for Liberal ambitions, but a target is only half the answer, perhaps even less. “What we need is not ambitious political targets,” Trudeau told the CBC in October. “What we need is an ambitious plan to reduce our emissions in the country.”

In the absence of a federal plan, provincial initiatives have sprung up. British Columbia has had a carbon tax since 2008, while Quebec has adopted a cap-and-trade system and Ontario will detail plans to do likewise in the spring. “Suddenly, you’re talking more than 70 per cent of the Canadian population being under emission-pricing policies without the federal government doing a single thing,” says Mark Jaccard, the economist and professor who advised the Conservative government and its Liberal predecessor. The Alberta government has also promised to increase its carbon levy and could soon announce additional plans.

Stitching those policies together, or crafting a new national policy to share fairly the burden and to balance provinces’ unique situations, is a rather complicated undertaking. How, for instance, do you account for resource-dependent economies such as Alberta and Saskatchewan? “How do you figure out how much each province contributes, whether in emissions reductions or dollars spent?” asks Jaccard. “How do you have coordination that is in the interests of everyone, for economic efficiency and equity reasons, as well?” The federal government will need to provide incentives for action, says Erin Flanagan, an analyst with the Pembina Institue, but also penalties to ensure compliance.

Can they do it? And can they bring the electorate along with them?

About climate change, Jaccard tells his own children to be patient and hopeful. “What I say to my kids, who are now in their 20s and very concerned about this stuff, and activists themselves, is: Humanity is going to be slow on global challenges like this, and then there could well be some kind of flipping,” he says.

For the moment—before the premiers sit down for dinner—it is possible to imagine that time could be near. The table, at least, is set.