Should Canada adopt a 'budget honesty' charter like Australia?

Opinion: Why such a charter could be helpful to Canada’s budget process 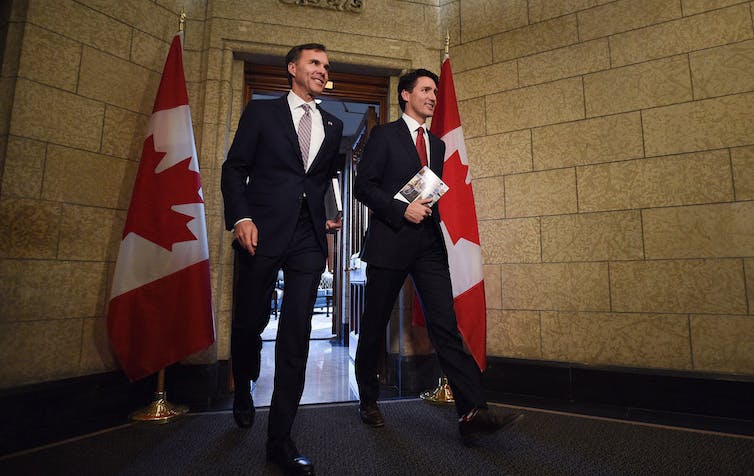 Finance Minister Bill Morneau and Prime Minister Justin Trudeau leave the Prime Minister’s office holding copies of the federal budget in Ottawa in March. Would Canada benefit from a Budget Honesty Charter of the type that’s had success in Australia? (THE CANADIAN PRESS/Sean Kilpatrick)

Many countries are now confronting at least three concerns in managing their fiscal position: They have a long-term reliance on borrowing, a difficulty in managing shocks to their economic systems and a high degree of opaqueness in the conduct of the fiscal process.

These problems seem to get worse every year, and while countries can take different approaches to tackle them, one possible approach gaining attention around the world is the enshrinement of fiscal rules and regulations.

Fiscal rules, such as debt limits and balanced-budget requirements, act as resolutions by governments to adhere to some set of budgetary directives. Sometimes, these fiscal rules are enshrined in a constitution or abiding document, which we can call a Charter of Budget Honesty.

In a broad sense, a Charter of Budget Honesty lays out the manner in which the budget system of a country, state or province should be managed. It may include suggestions for constraints and rules that encourage fiscal discipline, as well as for the general practice of preparing and presenting budget information. It may even outline the broader goals and objectives of the budget process.

The best-known among such documents is the Australian Charter of Budget Honesty. Since 1998, the charter has come to form a pillar of the country’s budget process and drives its budgetary culture both in terms of belief and practice.

As Finance Minister Bill Morneau prepares to deliver a fall economic update this week to document the recent strong growth in the Canadian economy, it’s a good time to ask: Could such a charter be helpful to Canada’s budget process?

In a research article for the Canadian Parliamentary Review, I examined whether Australia’s charter could be used in other countries, including Canada.

Although nations that include New Zealand and the U.K. have passed budget acts encouraging fiscal discipline, the Australian charter has become more prominent due to its local legislative budgeting context. At the time that it was first instituted, the charter represented the very best in fiscal policy legislation, both in terms of scope and rigour.

The charter initiated a set of rituals now considered core aspects of the annual budget. Australians have come to consider them standard political and economic practice.

The purpose of the charter is “to improve fiscal policy outcomes,” and it provides for this “by requiring fiscal strategy to be based on principles of sound fiscal management and by facilitating public scrutiny of fiscal policy and performance.”

READ: The PBO will suffer under the Trudeau government’s new rules

In order to meet these outcomes, the charter is comprised of several important moving parts that together build a more cohesive fiscal discipline framework. They help to increase transparency by creating a regular stream of government reports that apprise the public, Parliament and other government branches of movements in the national fiscal balance.

Limitations of these charters

Today in Australia, however, many of the country’s budget scholars seem to think that the charter’s definition is still insufficient and leaves a lot of wiggle room to interpret the abstract notion of “budget honesty.”

Among the charter’s criticisms, one of the most important is that the document invites an overproduction of fiscal data. And having too much data may be nearly as bad as none at all when it comes to restricting the ability of decision-makers to conduct oversight.

A second criticism is that such charters, or fiscal rules more generally, “encourage” fiscal prudence but they do not enforce it.

Additionally, there is an inherent trade-off between the flexibility of governments to act, particularly during crises, and the discipline they must exercise under the charter. Because of the high uncertainty about future economic growth, governments do want to keep some degree of flexibility to respond to changing circumstances.

Some political parties emphasize balanced budgets while others view the flexibility to run planned deficits as good fiscal policy. There is no final word in that debate and there may never be one.

Should Canada get a charter?

Despite the criticisms raised above, there is still reason to consider a Charter of Budget Honesty for Canada. The greatest case in favour of it comes from the fact that Australia’s public debt has remained low (private debt is a different story, and a much scarier one), for much the same period that the charter has been in place.

The charter’s underlying spirit of budget restraint, coupled with a long mining boom, has meant the Australian government today has more than enough fiscal muscle to withstand shocks. In fact, compared to almost all developed economies, Australia emerged virtually unscathed from the 2008 financial crisis.

Weathering that recession and proceeding through a “record-breaking,” uninterrupted 25-year period of economic growth with a strong fiscal position is the strongest and simplest argument for considering the mechanisms that made Australia’s strong fiscal architecture possible.

However, as my research has found, the suitability of a charter depends on its goal. If, on one hand, the objective is to ensure full and rigorous fiscal transparency and discipline, then such a charter, or any other budget honesty mechanism for that matter, would be an insufficient piece of legislation on its own.

If, on the other hand, the objective is to incrementally enhance Parliament’s fiscal engagement and budgeting rigour as part of a broader commitment to “fiscal prudence,” then a Canadian Charter of Budget Honesty could be useful.