Should the Trudeau Liberals rethink their plan for Syrian refugees? 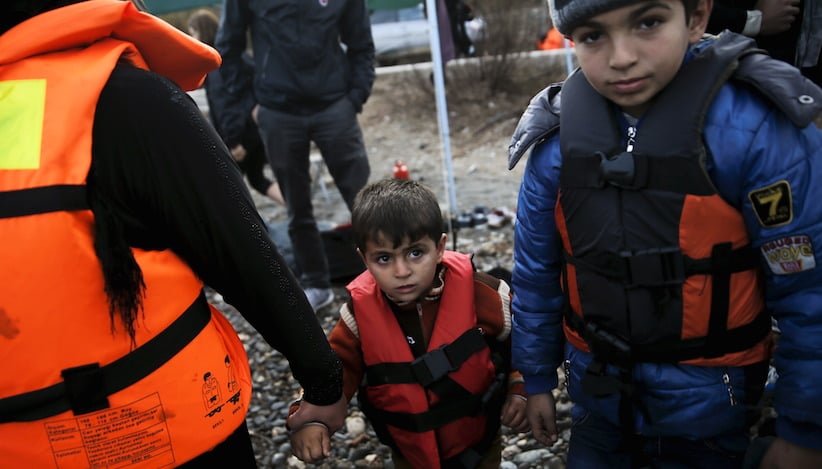 A Syrian refugee family is seen on a beach moments after arriving on a raft on the Greek island of Lesbos, November 10, 2015. Since the start of the year, over 590,000 people have crossed into Greece, the frontline of a massive westward population shift from war-ravaged Syria and beyond. REUTERS/Alkis Konstantinidis

Ahmad al Mohammad—if that’s indeed his real name; no one’s certain just yet—died a suicide bomber, blasting himself to pieces outside France’s national soccer stadium on Friday night. Three days later, the photo ID he left behind at the crime scene has proven almost as damaging as his bomb.

Perhaps he planned it that way.

Lying near Mohammad’s mangled body, investigators found a Syrian passport that chronicled a refugee’s journey through Greece, Croatia and eventually to France—proof, it appeared, that the so-called Islamic State had exploited the migrant crisis to smuggle an operative into the West. The terrorist group had long warned of deploying such a tactic, and security experts had every reason to fear such a claim could come true. (It’s a “huge concern,” James Clapper, the U.S. director of national intelligence, conceded earlier this year.)

The passport fallout was as swift as it was predictable. Poland announced it would no longer accept Syrian refugees, while more than a dozen U.S. governors spoke out against President Barack Obama’s plan to welcome 100,000 asylum-seekers from the region. And in Canada—where new Prime Minister Justin Trudeau remains adamant about fulfilling a key campaign promise to bring in 25,000 Syrians by the end of the year—opposition is mounting.

Leading the post-Paris chorus is Saskatchewan Premier Brad Wall, who released a letter on Monday, urging the PM to suspend his 25,000-refugee plan, pending more robust security checks on every potential newcomer. “I understand that the overwhelming majority of refugees are fleeing violence and bloodshed and pose no threat to anyone,” Wall wrote. “However, if even a small number of individuals who wish to do harm to our country are able to enter Canada as a result of a rushed refugee-resettlement process, the results could be devastating.”

Quebec City Mayor Régis Labeaume echoed that sentiment. “Let us open our hearts to human distress,” he wrote on his Facebook page, “but not to the detriment of security.”

The Liberals have just 46 days left to make good on their ambitious promise and, as each hour ticks by, Canadians continue to wait for the actual plan to emerge. About all we know for certain, compliments of Public Safety Minister Ralph Goodale, is that some of the security screening could take place on Canadian soil—after the refugees arrive. As Wall wonders, along with many others, why the rush? If it takes until February or March to conduct all the proper checks overseas, why not nudge back the arrival date in the interest of due diligence?

“The recent attacks in Paris are a grim reminder of the death and destruction even a small number of malevolent individuals can inflict upon a peaceful country and its citizens,” his letter continues. “Surely, we do not want to be date-driven or numbers-driven in an endeavour that may affect the safety of our citizens and the security of our country.”

Fair argument? Perhaps. But whichever way you’re leaning, remember this: No system of security checks, no matter how robust, comes with a 100 per cent guarantee. CSIS and the RCMP could spend the next year screening those 25,000 applicants, and one or two may still turn out to be ISIS sympathizers, if not full-fledged fighters. “Is it possible that one [terrorist] is going to come through? Absolutely,” says Phil Gurski, a longtime strategic analyst at the Canadian Security Intelligence Service, and an expert on Islamic extremism. “You can’t expect perfection from our security and law-enforcement agencies. But this country was built on immigration, and saying we can’t [bring in refugees] because of an attack on Paris is unjustified.”

Remember, too, where these 25,000 refugees will come from. They won’t be selected from the many hundreds of thousands of migrants who have made their way to Europe, such as Ahmad al Mohammad (or whoever he is). They will be handpicked from Jordan or Lebanon or Turkey—and only after being identified by the United Nations refugee agency, the UNHCR, as the absolute most vulnerable. “We are talking about women with children, families without fathers anymore, people who have been victimized by violence,” says Furio De Angelis, the UNHCR’s representative in Canada. “If we have a young mother with a small child, and people are saying there is a connection with terrorists, it’s a bit irrational. We have to be careful not to get carried away with the emotions of this terrible moment. Confusing the victims with the perpetrators of the violence who create the victims is not logical.”

In other words, it shouldn’t require much more than a basic security check to confirm that the vast majority of those would-be Canadians are genuine refugees in desperate need of resettlement. “We’re talking about 25,000, but you could come up with 200,000 who would still fall under that category,” says Peter Showler, the former chair of Canada’s Immigration and Refugee Board. “You may not be able to point out certain people who are definitely jihadists, but you can definitely point out tonnes of people who are not. They are so obvious.”

As obvious as Alan Kurdi, the three-year-old Syrian boy whose little drowned body horrified the world in early September. How quickly things can change.