Politics Insider for Dec. 9: NATO lunches can be cruel, waiting for an economic update and Doug Ford plays nice 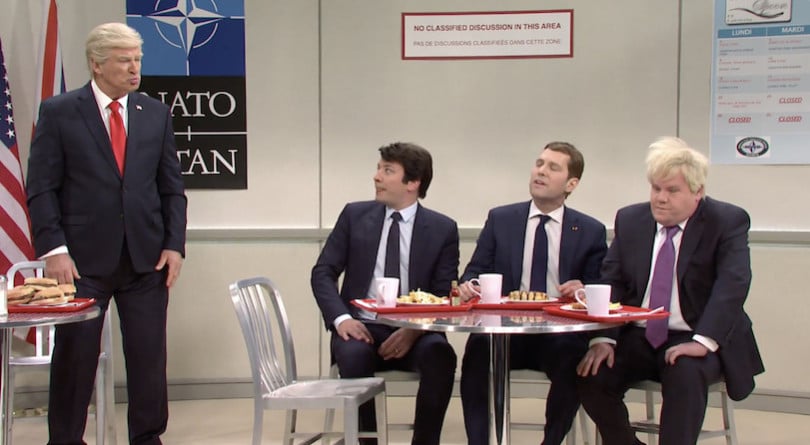 If you don’t laugh, you’ll cry: Tomorrow will mark one year since Michael Kovrig and Michael Spavor were detained by Chinese authorities in retaliation for Canadian police picking up telecom executive Meng Wanzhou on a U.S. arrest warrant. While out on partial — or should that be palatial — bail, she’s found the time to read more books and complete an oil painting. Kovrig and Spavor meanwhile languish in cramped jail cells where the lights are kept on all night and have no access to lawyers. Kovrig at least is finding ways to cope. “He’s strong, he’s resilient,” his boss, Robert Malley of the International Crisis Group, told CBC. He’s got a “sense of humour and a sense of perspective” but he “doesn’t know why he is where he is and doesn’t know at what point the Chinese authorities will let him go free.”

Something to really laugh about: How could they resist. Saturday Night Live drew inspiration from Justin Trudeau’s hot mic moment in London, when he was caught gossiping and laughing about Donald Trump with other world leaders, to take us deeper inside the cruel, cliquey world of the NATO cafeteria. The skit featured Jimmy Fallon apparently as Mike Myers as Trudeau and Alec Baldwin once again reprising his Trump character.  While debate continues on whether the  incident will or won’t have a spillover effect on Canada-U.S. relations, Trump has so far not repeated his calls for a federal probe into the sketch comedy show so maybe he missed it or had something else on his mind.

Confident about what lies ahead: Perhaps it’s fitting that in the long, drawn-out start to Trudeau’s second term, the confidence vote on his throne speech probably won’t happen until sometime in the new year. Government House Leader Pablo Rodriguez said on CTV’s Question Period the vote could spill over into 2020 though it’s not like we don’t know what’s coming — the Bloc have already committed to support the throne speech. But two other confidence votes could happen first — a vote tomorrow on the supplementary estimates, and possibly another on Trudeau’s middle class tax cut.

Meanwhile the Conservatives are pushing the Liberals to provide a fall economic update right away, though Finance Minister Bill Morneau has avoided all attempts to pin him down on the date of its release.

The plan to rescue Doug Ford’s unpopular premiership: A big part of that plan is ‘No more Mr. Mean Guy,’ writes Stephen Maher. In other words, stop picking fights and play well with others—including the Prime Minister:

People close to Ford say nothing in his previous experience—running a medium-sized label company and serving one term on city council—prepared him for the subtle, difficult job of governing Ontario. The qualities that had served him well previously—his bluff authenticity, his accessibility, his salesman-like way with people—had not scaled up to the job at hand.

“Doug was learning the role,” says one confidante. “He didn’t know what it was to be premier.”

Insiders say that although published polling may not show it, things have turned around, and they have a plan to recover further. Read more ››

The Britain I knew is lost: With the U.K. election taking place this Thursday, the once resilient country is in a state of crisis, sinking in a national mood of powerlessness and indifference, writes Michael Coren:

This emotional and political miasma became most obvious after the Brexit vote, when half of the country was incredulous at the result, shocked that what was considered a non-contest, and merely a cynical move by then Prime Minister David Cameron to silence his party’s right-wing, had resulted in the removal of Britain from the European Community, the most successful political project in living memory.

It’s all been solidified by an election campaign—the vote will take place on Dec. 12—where some of the least impressive leaders in the country’s history do battle, less for a shining trophy than a poisoned chalice. Whoever is prime minister in a few days will have to secure the country’s exit from Europe, with all of the troubles, humiliations and losses that are inevitable. Read more ››

Don’t hold back: Help us better understand what you’d like from the Maclean’s Politics Insider newsletter. This short survey will only take a few minutes to complete. We really appreciate the feedback.