Smarmy or savvy? A look at Pierre Poilievre 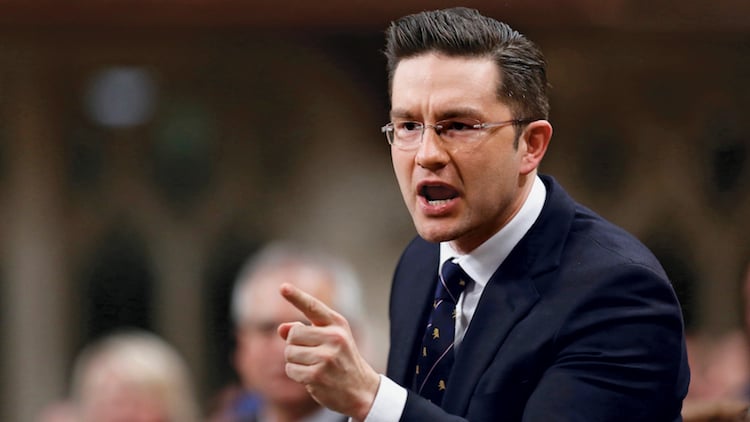 OTTAWA – “Politics should not be a lifelong career,” a 20-year-old Pierre Poilievre once wrote, “and elected officials should not be allowed to fix themselves in the halls of power of a nation.”

But fix himself in the halls of Parliament he did, and politics is the only real career Poilievre has known.

The 34-year-old minister of state for democratic reform has already served a decade in the House of Commons, and today is one of the most polarizing figures on the federal scene.

When the Commons returns from a two-week break on Monday, he’ll once again be steering a newly amended Fair Elections Act through hostile debate. He’s sparked outrage by questioning the motives of critics such as the chief electoral officer and former auditor general Sheila Fraser.

His detractors say they’re put off by a demeanour they see as overly smug and partisan. NDP Leader Tom Mulcair has called him a “lightweight” who displays “smarmy arrogance.” He’s also been called a clown and a pit bull.

“He’s a very difficult minister to know how to interact with, because he’s so oriented towards political modes, and he’s so invested in a carefully crafted and rehearsed talking points,” said NDP democratic reform critic Craig Scott.

Poilievre’s fans, meanwhile, respect the boyish-looking politician’s tenacity and loyalty to the party. Few MPs would embrace the tasks he’s been given.

“Any time someone who is young, energetic, self-confident and proposing change … you are going to attract both the positive and the negative, and he does that,” said former cabinet minister Stockwell Day, one of Poilievre’s first political bosses.

While Poilievre didn’t live up to the commitment he expressed in a national essay writing contest to resign after two terms in office, he’s remained steadfastly conservative.

As a business student at the University of Calgary, Poilievre’s winning submission to the 1999 “As Prime Minister…” contest extolled the virtues of small government. (Joan Crockatt and Mike Duffy, two journalists who would go on to become federal Conservative parliamentarians themselves, were among the judges for the $10,000 competition.)

“As prime minister, I would relinquish to citizens as much of my social, political, and economic control as possible, leaving people to cultivate their own personal prosperity and to govern their own affairs as directly as possible,” Poilievre wrote.

Alberta Justice Minister Jonathan Denis met Poilievre through that contest, and the two have been close friends ever since. They own real estate together in Alberta, and once ran a political consulting firm together in their early 20s.

Denis says he’ll often get late-night calls from Poilievre, who wants to talk about policy and politics. On a personal level, he says Poilievre is the most reliable kind of friend.

Poilievre went on to support Day’s move to the federal scene as leader of the Canadian Alliance. Poilievre followed him to Ottawa in 2002, and worked as his legislative assistant, living for a time in a tough housing project southwest of the city.

In 2004, then only 24, Poilievre decided to run against Liberal cabinet minister David Pratt in an Ottawa-area riding. The party had a “blue list” of ridings they felt could be picked off from the Liberals, and possible candidates. Poilievre was on it.

“To be honest, I didn’t share all my doubts with him about being able to do that,” admits Day, whom Poilievre consulted on the plan to run.

“But I thought if anyone could pull it off, it would be him. He’s engaging, people like him.”

The Albertan with relatively shallow roots in the area managed to take the riding.

When the Conservatives finally formed government in 2006, Poilievre was given the relatively high-profile role of parliamentary secretary to then-Treasury Board president John Baird. Baird and Poilievre helped shepherd the Federal Accountability Act through the Commons.

Poilievre stayed close to the centres of power, for a time dating top campaign operative Jenni Byrne. He became parliamentary secretary to the prime minister, and has been handed some of the most politically volatile files to defend in committees and the Commons. Like the bouncy, well-trained kangaroo of the Australian kids’ show, the earnest young MP earned the nickname “Skippy” from his colleagues.

There have been some missteps. In 2006, he apologized for making an obscene gesture in the Commons. In 2008, he said he was sorry for calling into question the value of compensation for the aboriginal victims of the residential schools system. He invited ridicule last year after the Boston bombing when he said that the “root cause of terrorism is terrorists.”

But Poilievre has seemed to maintain the trust of the Prime Minister’s Office. The only sensitive file he temporarily declined to defend was that of Stephen Harper’s former chief of staff Nigel Wright, who cut a secret $90,000 cheque to Sen. Mike Duffy last year.

Liberal democratic reform critic Scott Simms attended an MP orientation with Poilievre when they both first arrived in 2004, a collegial connection that has lasted the decade.

He says he finds Poilievre to be very partisan, but that every party requires those types of soldiers in the Commons.

“I think he’s got his marching orders and he’s doing it to the best of his ability. I think that’s maybe why they gave it to him,” Simms says of the electoral reform debate.

“I’ve never said that Pierre Poilievre is not intellectually capable of understanding what we’re saying. I think he gets it; it’s just a question of, ‘He has to sell this thing.'”