Canada's two most tempestuous leaders try on a new face, and more absurd things about the coming election 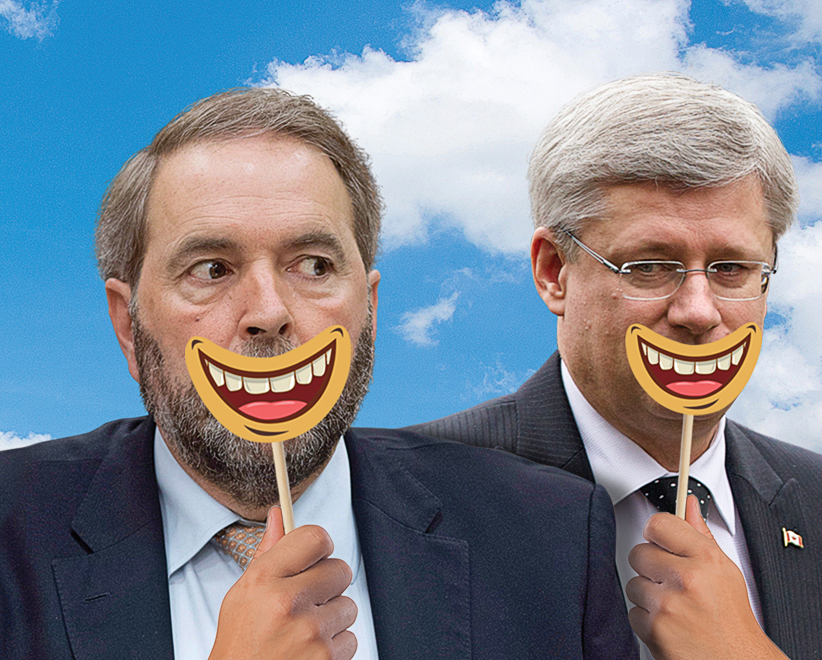 Summer is coming and, with it, the return of such glorious Canadian traditions as the opening of the cottage and the closing of the ears to the words of our politicians. Before we tune out, let’s check in with where the parties stand, as the October election approaches.

Both the Liberals and NDP are trying to woo middle-class Canadians with lots of steamy talk about tax rates, income inequality and stock-option loopholes. Lately we’ve been witness to a Hollywood montage’s worth of grand gestures of economic seduction, including Liberal Leader Justin Trudeau’s pledge to raise taxes on big earners. It’s just like The Notebook, but with more PowerPoint.

The Conservatives, meanwhile, continue to lead in most polls. But there are hurdles that are destined to confront any party seeking a fourth term in office.

For one, the opposition is certain to portray the government as tired and out of touch. For another, after almost a decade, it gets tricky to explain why you haven’t already done all the things you’re promising to do if you win again. Fellow Canadians: It is imperative you re-elect us to address the grave injustices we’ve just spent 3,518 days ignoring.

What can we tell about Prime Minister Stephen Harper’s re-election strategy so far?

First, the Conservatives want voters to dwell on the risks of switching governments. They’ve already started referring to the October vote as the “biggest election in Canadian history”—which fits nicely with our tendency to think that everything happening right now is the biggest thing ever to happen. The Trial of the Decade. The Fight of the Century. THE SCONE OF THE MILLENNIUM.

(The Conservatives are by no means pioneers in this regard. As some may recall, I wrote election speeches for Paul Martin. To this day, my fantasy baseball team is named the Most Important Team Ever.)

Second, the Conservatives are placing a strategic priority on public safety. A recent fundraising message gives a hint of what’s to come: “Only a Conservative Majority will carry through on our pledge to keep Canadian families safe.” That sounds like hyperbole, but let’s face it: It’s the Liberal party’s own fault for rolling out their controversial Actively Seeking to Harm Canadian Families plan. (This plan does not exist—but, by the time the campaign begins, the Conservatives will have spent enough on attack ads to make you believe it does.)

Third, and most intriguing, there is a clear effort to tweak the PM’s image. I’m not sure if you’ve noticed, but Harper is a “sunny optimist” now. Or he’s trying to be. The whole concept of “sunny” is pretty new to him, so there’s bound to be an adjustment period. Right now it’s like watching a puma try to deal a hand of poker.

Why the change? Harper’s advisers reportedly believe “austerity fatigue” has set in. Voters may not respond again to the ﬁst-shaking curmudgeon warning the economic downturn to get off his lawn, so it’s time for Smilin’ Steve. Turns out, those aren’t troubles lapping at our shores—they’re waves of prosperity! Or possibly even just regular water!

Harper has been road-testing this new disposition. He grinned while answering questions about the budget. He laughed while visiting troops overseas. There are unconfirmed reports he recently held a baby without wearing dishwashing gloves.

He’s not the only leader being reinvented. NDP strategists have been working to transform Thomas Mulcair—from “Intellectual Tom” into “Everyman Tom.” There’s been recent evidence of their efforts. Tom goes to a hockey game. Tom drinks beer in a pub. Tom tries to use a contraction in conversation without wincing.

The strategy for both Harper and Mulcair is clear: Neither appears to fear Trudeau’s policies or intellect. But they acknowledge the appeal of his charisma and his youthful, upbeat demeanour. With no currency in being a grump or a bore, they are seeking to convey a more hopeful and positive image.

Let’s pause and allow all this to sink in. Stephen Harper and Thomas Mulcair—the two federal party leaders most likely to star on a reality show called Canada’s Shortest Temper—are going to try to make it through an entire campaign as smiling, carefree optimists. Suddenly, I could not be more excited for autumn. The theme of the campaign is now taking shape. Election 2015: Who’s Going to Snap First?