UPDATED: So the Little Shop of Tories isn't good enough for you anymore, huh?

Unsatisfied, it seems, with carpet-bombing currently enemy-held territory with ten percenters, the Conservative Party has gone and hired itself  one of those newfangled new media firms — a Manitoba-based one at that. The Mars Hill Group, the Free Press reports, “will be helping individual Conservative MPs and Senators make personal, customized videos”, and that according to the website,  the first — starring everyone’s favourite prime-time-political-broadcaster-turned-senator and “longtime party supporter” Mike Duffy — is slated to “start hitting inboxes this fall”.

Oddly, the announcement — which was prominently displayed on the site last week  — seems to have vanished, for some reason, but luckily, the original text is still available, courtesy of  Google cache. 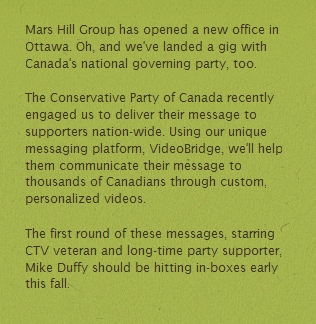 Why is was removed is, alas, a mystery — and if ITQ can find out, she’ll let you know.

UPDATE: As it turns out, she can, and did — scroll down for an explanation of sorts from Mars Hill.

But what she’s really curious about is what this means for the denizens of the Little Shop of Tories — the sprawling, 17,000 square foot compound in Ottawa’s east end of which the party was so proud that, on two separate occasions, they flung open the doors to reporters to show off the vast array of state of the art multimedia wonders housed within.

Armed with every conceivable electoral amenity, from an in-house broadcast studio to a sea of flat-screened monitors set up for voter outreach and candidate support, it was supposed to be the future of  political campaigning in Canada. Of course, as it turned out, even the promise of bearing witness to the dawn of a new generation of electioneering wasn’t enough to get those same reporters to show up at 6am every morning to watch Jason Kenney deliver whatever the message of the day happened to be, but still. It was darned impressive, and — let’s be honest, here — provided us all with considerable entertainment, some of which was even intentional, during the last election.

But now, we find out that the party is planning to outsource something that you’d think the masters of the pixelverse out on Lancaster Road would be able to do in their sleep? Unless spamming the inboxes of hapless party supporters with cunningly “personalized” video clips of Mike Duffy is trickier than it sounds, which is distinctly possible, of course. Still, while she may have cheerfully savaged the Little Shop’s handiwork in the past, she also looks forward to doing so in the future. Which is why, in this instance, ITQ will be rooting for the home team. Don’t make her whip up a batch of “Save The LSoT” t-shirts.

Oh, and one more note, on a related issue: While ITQ appreciates the categorical — even vaguely threatening — denial from PMO spokesman Dimitri Soudas on his party’s possible involvement in what she’s taken to referring as “London Calling”, she must point out that, strictly speaking, it’s not his job to comment on behalf of the Conservative Party. Back in the day, that sort of thing would have led to all sorts of tongue-clucking from the opposition — and the press — over using government resources for party business. Then again, since  as far as she knows, they still haven’t filled the Sparrow’s nest over at CPC HQ, so it’s possible there just isn’t anyone currently employed by the party who is allowed to talk to the media. Still, it’s sloppy — and next time, someone might actually call y’all on it.

UPDATE: ITQ just got off the phone with Tammy Wood, executive assistant with the Mars Hill Group, who confirmed that the announcement — which, she says, was posted by a “junior writer” before getting “signoff” — was, indeed, removed due to inaccuracies. “We did misspeak with some of the comments on Mike Duffy as  a ‘long-time party supporter’,” she told ITQ. “We needed to get that fixed.” She won’t say whether an amended version of the announcement will return to the site in the future, noting only that the company “regularly rotates releases,” and wasn’t willing to say whether the party had contacted the firm about the announcement. In fact she referred that, and all other questions about the contract back to the party.

EVEN UPDATEDIER: Mia Rabson, the Free Press reporter who broke the story in the first place, checks in with an update of her own.