So, what brings you here, Mr. President?

Liveblogging the G20 edition of the Obama Show 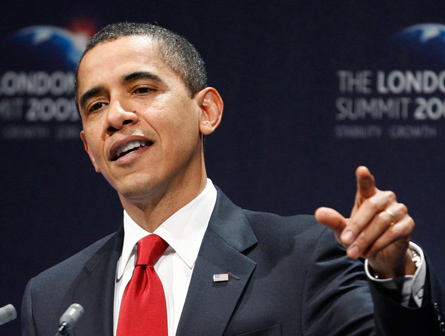 6:32:38 PM
Okay, so, sort of some sort of hyperlocalized meteor strike, it seems unlikely that I’m going to make it into the Obama press conference, over which I’m actually secretly not totally heartbroken, simply because my fingers and my brain are both on the verge of performing a hostile takeover of my nervous system and forcing me to flee the vicinity by whatever means necessary, even if I have to hijack a ferry. Note to British secret service equivalents: I will not be hijacking a ferry. I don’t know how to drive one, and also, that would be illegal and wrong.

6:37:46 PM
Well, that’s just great. I wandered over to the big briefing room just to do a duty check to make sure I couldn’t get in, and what do you know, I did. Isn’t it always the way? Anyway, I’m currently sitting on the riser beside Les Whittington, bemoaning my fate yet doing my duty.

And – here he is. Late or early? I’ve lost track. He thinks it was a “historic summit”, noteable for the backdrop of the economic crisis, which is very bad. Very bad *indeed*. Job losses, housing, students not able to go to school – sorry, do y’all really need me to go on? I feel like this entire preamble could be a macro by now. Anyway, in the past, the world was slow to act – like the Great Depression, where they waited nearly a decade to take action – but today, the world has shown that it has learned its lesson: Act now.
6:42:55 PM
Interesting – a not-so-veiled shot at certain commentators – including of a journalistic persuasion – for suggesting that a lively debate over different approaches constituted a quagmire of planetarily dysfunctional proportions.

I’m sure it wasn’t related, but a small gaggle of reporters who were sitting in this session just stood up, en masse, and left — to get closer or depart in a huff? Who knows, really.

Oh, right, Obama. He thinks we need to put an end to the “bubble and bust” economy — stronger regulatory reforms are necessary,

6:47:32 PM
The G20 will be meeting again this fall, apparently – hope we’re not in the middle of an election then, not that one can expect the world to stand back and wait for Canada to develop some sort of political stability. He refers to other issues that have to be dealt with, from terrorism to climate changew, and tells the room that he’s commited to consensus, and that’s how we’ll go forward in the months to come.

I just realized that I’ve been unconsciously waiting for him to switch into French.

6:49:40 PM
Yay! Questions! He has a list, but he might shake things up with random names too. Oh, he’s a tricksy one, this president.

Argh. I hate it when the questions aren’t picked up by the mic. Anyway, someone asked *something* that resulted in him crediting American leadership for the fact that “we did okay”. He notes that developing countries weren’t the cause of this crisis, but are nonetheless suffering its effect(s).

6:52:52 PM
Okay, that question – which is basically the exact same one that the Star asked earlier about ordinary Canadians, only substituting “Americans” – is officially boring. ITQ has decreed it – let the word go forth. Obama is answering it – he’s not saying anything radically different from the PM, but it’s also nothing radically different from anything he’s said before.

6:54:57 PM
A BBC reporter challenges Obama to list something on which he made a “major breakthrough” at the meeting, but the president, not being an idiot, declines to give specifics as far as what happened at the table.

Sometimes it’s almost as interesting to watch the media watching the stage as it is to actually pay attention to what you’re supposed to be liveblogging. I’m amazed by how orderly the floor is – especially the photographers, who have filled the area in front of the stage completely and are now spilling out into the aisle.

7:00:08 PM
An American reporter – Michael Scheer – asks how his foreign policy differs from that of his predecessor, and Obama dodges the softball easily. He’s not going to turn this into a Bush bash session, but his reference to consensus and “humility” definitely seems to lay the tracks in that direction.

Why is that camera filming me as I sit on this riser and type frantically. I hope it didn’t catch me doublefisting; that’s so hard to explain to people who don’t understand the need for two BlackBerries.

Meanwhile, Obama is continuing to manage expectations – and isn’t that the headline you could save and reuse for the next, oh, six months to a year at least?

7:03:38 PM
Sprinkly! Sprinkling of the reporter questions – an Australian reporter gets lucky this time, and she wants to know more about bailouts and loans – and, more specifically, who will make decisions on salaries and bonuses – the boards? Or will it be regulated? Obama notes that for too long, too many boards have had a “too cosy” relationship with the executive(s) that appoints(no s) them. That can distort the situation. He points to legislation he brought in during his Senate career which would have required a shareholder vote on compensation, even a nonbinding vote.

7:08:46 PM
Aw, poor Obama has a cough. “I’ve been fighting this all week,” he jokes, before delivering another novella-length response to a frustratingly vague question – again, no criticism intended towards the reporter who asked it; it’s just one of those issues that doesn’t exactly allow for creative lines of inquiry.

7:10:54 PM
Wow, he takes followup questions? That’s — courageous. I suppose he’s more comfortable with “his” reporters — the US travelling press — since he has a pretty good idea where they might go with a second question. Us foreigers, we could be dangerous.

7:13:46 PM
China Television wants to know about – surprise! China! Specifically, US policy thereto; he also wonders why the president seems to prefer American and British reporters to, oh, those from, say, China. Obama handles the second one with ease – he’s not president of France, or Japan, or any of the other countries here; his constituents are Americans, and he owes them answers. He also has a responsibility, however, to show Americans that their future is tied up with the rest of the world. No island is an island, in other words. What? North America is an island, sort of. Oh, shush. We’re almost through; let’s just hunker down and think how tasty those fish and chips will be.

Did I mention I’m craving fish and chips? Or, alternately, the other half of the package of shortbread that I left back at the hotel, lo those many hours ago that we departed for this encampment?

7:19:10 PM
There are individuals who will be harmed by a trade deal, and businesses that will go bankrupt – and the government has to be there for them.

Okay, two more questions. First, Jonathan Wiseman — why do I recognize that name? Anyway, he, too, wonders if the declaration of the end of the “Washington Consensus” represents a loss of authority for the US, and Obama notes that he didn’t say it was *inevitable* — it was predicated on certain decisions made by his predecessor, and he wasn’t the only one making that observation. Now, however, he’s seeing people more hopeful about the role of the US.

The woman behind me is laughing uproariously at Obama’s Churchill joke. For some reason, that seems odd, but maybe I’m just not used to whimsical, teasing world leaders.

7:24:12 PM
One more “foreigner” – although he *is* the foreigner, he notes – which sparks a major outburst of kerfuffling from the front rows – and eventually chooses a very sweet-voiced woman from the Times of India, who I can’t actually see, but who he then proceeds to tweak – affectionately, but genuinely – when she responds to his preamble about her country’s prime minister as “great” with a spontaneous “thanks”. Somewhat bemused, the president asked if she had something to do with that, since she seems to be taking credit — but in a nice way, not a hostile way, like it would sound if — never mind, not the point. Anyway, she blushes – or at least her voice does; I still can’t see her face – and then the president does go on to answer the question.

7:29:19 PM
And finally, a question from Chip – travelling press, and I gather the recent victim of some sort of misfortune, since Obama begins by telling him that his thoughts are with him. Chip then asks whether everyone at the meeting blames America for the crisis – and the president acknowledges a certain undercurrent of that tone in sonme interactions. But, he notes, European banks have had “issues” – in the past and the future – and without coordinated strategy and scrutiny, an AIG would move around the world in a second, looking for the highest returns and building a house of cards. Overall, though, it was a good meeting, he says.

And – that’s all for Obama, and, as it happens, for ITQ – at least for the day. I’m operating on three hours sleep since Monday night, and I’ve been liveblogging since just after seven. I’m going to sign off, and head out to enjoy a little English hospitality, which I know is exactly what most of y’all would want me to do.

FILED UNDER: haven't i seen you somewhere before mr. president? itq goes to the g20 o abroad