A sober, six-month political check-up to gauge the gap between the Trudeau rhetoric and reality 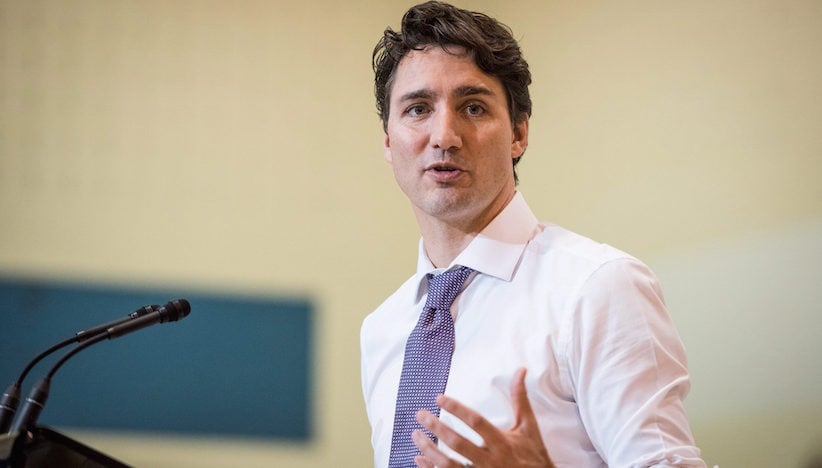 Let’s all just take a pause.

It’s time for a sober, six month political check-up to gauge the gap been Prime Minister Justin Trudeau’s rhetoric, and reality. A lot has happened. Even the PM took his cabinet to Kananaskis, Alberta for a mid-year review.

Maybe try a little of the mental yoga practice Justin Trudeau used to do on the front lawn of Parliament Hill when he was a mere backbencher, before every time he stretched a muscle it went viral. Breathe.

Haters: we know Justin Trudeau is driving you crazy. Sting-like-a-butterfly-Shakespeare-reciting-quantum-physics-defining-deficit spending-crazy. But for a moment, just pause.

Fans: we get it. You’re going Beiber-level gaga. Especially you, in the back, International media. You’re practically hyperventilating over the man. Cool it. This is Canada for gawd’s sake. Do that privately if you must.

So much has happened so quickly, almost breezily, that Paul Wells’s term for it, “Turbo Zen” must now be declared the winner of the “define the moment” sweepstakes. The budget was delivered, as was legislation on physician assisted death, seven new “independent” senators were appointed, promises were made on pot legalization and electoral reform and a new health care deal and a price on carbon, the Paris Agreement on Climate change was signed, a defence review initiated, the CF-18s were pulled from Iraq and Syria, more ground troops were sent in, judges rolled back legislation on mandatory minimums, the Truth and Reconciliation commission Report came out, a National inquiry into Missing and Murdered Indigenous Women kicked off, the price of oil sank Alberta, the State Dinner in the White House happened, as did attacks in Paris, Brussels, Libya, Iraq, Turkey and Israel—and just this week, we learned of the horrific beheading of a Canadian by a terrorist group in the Philippines. You practically have to put a paper bag over your mouth to avoid getting dizzy.

But speed is no mask for substance—or, to use the stylish new word of the British advisor to the Trudeau government, for “deliverology.” What has been delivered in the last six months?

Let’s start with the economy.

The budget came out with massive deficit spending and a promise to stimulate growth, but something smelled funny. The deficits, already well beyond what was promised in the campaign, were too large to justify. Almost immediately the Parliamentary Budget Officer laced into it for lacking critical details. “It was less transparent than the previous government,” Kevin Page, the former PBO, wrote to me, when I asked him to for his six month grade on the government’s economic performance. While he supports the overall stimulus strategy of the government, he was withering on its execution. It’s worth reading his entire response:

“Large forecast adjustments have gone unexplained. Little to no analytical additions. No definition of the middle class, yet the government wants to help and grow the middle class. No cyclical analysis or sustainability analysis on the deficit projections. Departmental reports on plans and priorities have not been re-tabled so Parliament is being asked to approve higher appropriations with no plans to hold the government to account. The government committed to being more evidenced based. They are moving in the wrong direction. They need a course correction. On budget transparency: needs improvement.”

Of course, Page is right, but we all suspect the Finance Minister has inflated his deficit numbers so that in the next few years—Poof!—the deficit might not be as bad as we all thought. It’s the oldest political game in town. But that budgetary off-roading has left a fair bit of mud on the windshield of transparency.

Page says it’s too early to deeply analyze economic performance under the Liberals and ascribe credit or blame for movements in GDP or job creation, or even whether those movements are due to this government’s policies or those of the last government. But politically, the public holds the government in power to account.

Related: Everything you need to know about Budget 2016

Overall, however, Page believes the government’s strategy of deficit stimulus spending is bold and he says initiatives like child care, infrastructure, Aboriginals, and spending on Veterans “exceed expectations.” He also grades the government’s new tone and its ability to get the public on side very highly.

But he has a warning: “It is all about budget implementation. Risks are building on big files like infrastructure, including infrastructure for Aboriginal people. There are no plans in front of Parliament. As the days and months pass, it will be hard to get the money out the door and economic impact is reduced as higher spending authorities go unspent.”

What about some other key files? On climate, the government signed the non-binding Paris Agreement, but has stuck to the same greenhouse gas emissions reduction targets that Stephen Harper set, targets the Liberals once maligned. Getting all the provinces on board for a national climate plan makes quantum physics look easy, and Saskatchewan Premier Brad Wall doesn’t look like he’s ready to play nice. This will be a grinding, hard fought negotiating portfolio from here on out. Add to that file the tremendous pressure to build the Energy East pipeline, which I bet the Trudeau government goes all in on in an effort to save Alberta’s economy. The landing wheels are clearly down on the soaring climate rhetoric.

Related: The party is over. Now the hard work begins on climate change.

On physician assisted dying, real credit must be given to the Minister of Justice for crafting some balanced, cautious legislation on a deeply difficult issue, but cautiousness might not survive the coming Charter brawl and the whipsaw debates in the House and the Senate where both sides feel the legislation is flawed. If it passes June 6, it will be a major win, but this fight is just starting and all bets are off as to what happens on the vote.

On legalizing marijuana and electoral reform—two other massively complex issues—the time lines are already dangerously short. The government has to strike committees and task forces, hold consultations, write reports, and pass legislation. Why the government put a date of spring of 2017 on the pot legalization I don’t know, as it’s opened them up to real questions about why they don’t immediate decriminalize pot so people don’t get busted by what is essentially a lame duck law. But still, this file can get done if the Liberal point person—the parliamentary secretary to the minister of justice and former Toronto police chief Bill Blair—puts his head down and pushes hard.

Electoral reform, on the other hand, will prove to be the harder battle, so grab a dictionary to prep for debates about proportional representation versus preferential balloting. If you think this is the rise of Parliamentary nerd, it is. It’s like when the comic book makers at Marvel and DC, once relegated to dirty street shops selling T-shirts, suddenly took over Hollywood, made blockbuster super hero movies and became moguls. This debate will be, well, I’ll just say it, huuuge. For now, the grade is a C for progress, A minus for ambition. Please use class time more efficiently.

What about defence? It’s really early to judge such a massive slow-moving file, but the budget already delayed billions of dollars in planned spending while a defence review is now underway. That review will be critically revealing as there are urgent spending needs on all fronts. On some of the new promises, like re-committing to the UN and peacekeeping, Dave Perry at the Canadian Global Affairs Institute points out that the details are sparse. The summer may hold news there, or so Perry hopes. The government has quietly back-tracked on ruling out the F-35 to replace the CF-18s as Canada’s fighter jet, which is smart. Politicians don’t choose planes, they have statements of requirements that must be met by a company. The competition to meet those requirements must be wide open. Perry gives high marks for investment in the navy, specifically sticking to a plan devised by the Harper government to replace the older destroyers and frigates with up to 15 new ships, now called surface combat ships. “This demonstrates to me that they’re serious about moving quickly on naval recapitalization,” Perry says. Let’s give this a “Needs improvement” score, because neither Liberal nor Conservative governments have ever matched their desired military bang with the required buck.

As for selling light armoured vehicles to Saudi Arabia? It’s a problem file, not just because of the regime there—as bad as they are on human rights, the Saudi’s are allies in the larger fight in a nasty neighbourhood—but because Stéphane Dion cannot manage the message of his file. His mangled explanation of the sale turned what should have been a defensible issue of hard-nosed realism into the flaccid hypocrisy of self-serving idealism.

For the record: Stéphane Dion on ‘responsible conviction’ and Liberal foreign policy

On a related matter, in public safety, there is little evidence on what the government will do about the controversial anti-terror legislation Bill-51. It engulfs issues of security, privacy and how the entire security apparatus operates in a coordinated fashion. Not easy to fix quickly and not one we should rush into either. One good sign? The government is actively and widely consulting before they act. “I have benefited from more discussion on these matters with those in government over the last six months than I did in the 10 years prior,” says Craig Forcese, the associate professor of law at the university of Ottawa. He led the debate on this issue, and hopes that the government will hack its way through the complexities, especially where, as he told me, “ technology outpaces the law.” Let’s reserve judgement.

Meanwhile, the Minister of Canadian Heritage has set an aspiring goal of total overhauling all broadcasting regulations. Way too early to judge where that goes. Cultural funding is an explosive issue in Quebec and across the country. Add that to the fire sticks being juggled in the air.

Finally, on the Aboriginal file, full marks must be given to the real attention and focus paid to this issue. It has been made a priority and after generations of neglect, that is genuinely laudable. But as the former national chief of the Assembly of First Nations, Phil Fontaine, told me months ago, expectations are running very high. The government has to deliver. The trouble is, the issues that need addressing—legal, educational, health, culture—are so complex that it would be arrogant to think that there are quick wins. Still, credit the government with not trying to push the challenges into the dark.

So, after six months, with massive public support still strong, the Trudeau government’s report is a mixed bag. Some wins, some losses, but mostly we are watching an insatiable appetite for ambitious change on tight timelines. The clock is ticking. The price tag is massive. For all these issues, the real results will soon be measured in one calculus: economic growth.