The saddest victory party in Canada

Inside Montreal's Palais des congrès, the crowd chanted 'four more years', while Justin Trudeau tried to cast the win as the undiluted victory it wasn't 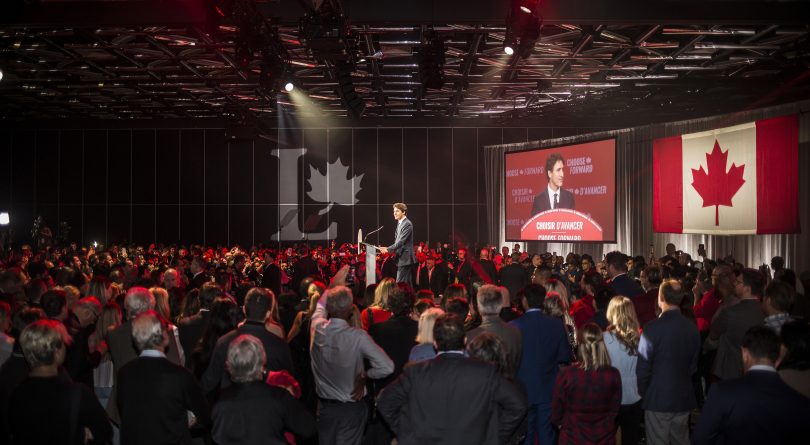 Trudeau speaks after the election win in Montreal on Oct. 22, 2019 (Photograph by Roger Lemoyne)

In this small, mean election campaign, where someone had to win because it was not possible for everyone to lose—despite their best efforts sometimes, it seemed—it is only fitting that the Liberals’ minority victory was met with a slightly hoarse exhalation of relief rather than a roar of triumph inside the cavernous Palais des congrès in Montreal.

The crowd was oddly thin, numbering only a few hundred when the TV networks declared the race for the Liberals just after 10 p.m. ET, and it skewed noticeably young, stacked with students. Perhaps many of them hadn’t been eligible to vote in 2015, and so they had not been disillusioned by Liberal leader Justin Trudeau the way many others had. Or maybe they were still young enough to be swept along by the vision of a slightly bedraggled sort of hope and hard work.

To be sure, the crowd went predictably wild when the networks declared that the Liberals would get to keep governing, albeit in a weakened minority state. Soon after, chants of “Four more years” broke out, despite the fact that the result meant that kind of longevity would be a stretch. “‘Four more years’ seems so American,” a woman in the crowd commented to a man with her. “Yeah,” he agreed.

But overall, the deflated-balloon quality of this exchange, even on the night of a putative win, felt emblematic of the whole affair. There was a flatness and emotional muddiness to the evening and the people in the room—who never came close to filling the space—the belies any narrative of ecstatic relief and vindication. Someone won, because someone had to, and the night in Montreal felt exactly like that.

Past midnight, Pablo Rodriguez—at dissolution of Parliament the minister of Canadian heritage, re-elected on Monday in Honoré-Mercier—took the podium as the warm-up act for Trudeau, and he began by bellowing, “How’s everybody?” It wasn’t what he was asking, of course, but how do you find the proper emotional response to a chastening half-victory that could very well have been a well-deserved defeat, only four years after sweeping the country with a Camelot North updraft that made your opponents grind their teeth to stumps in frustration because they couldn’t compete?

Earlier in the evening, the first supporter through the doors—more than an hour before a critical mass of her brethren would show up—was Colette Chartrand. Wearing a red fuzzy hoodie festooned with a trio of Liberal buttons—including a smiling head shot of Trudeau that seemed drawn from a more idealistic time, she circled the empty convention centre floor, leisurely checking out the TV crews, before taking up a prime viewing spot along the rope line in front of one of the two giant screens cycling through national news broadcasts.

Chartrand lives in Marc Miller’s Ville-Marie–Le Sud-Ouest–Île-des-Soeurs riding, and she canvassed for the Liberal campaign, “Because they’re not separatist and also they want to put Canada forward and not backwards.” By “backwards,” she was speaking of the Tories, and she could barely conjure a full sentence to explain, so vexed was she by what she saw as the leader’s cynicism. “Andrew Scheer comes on and makes false accusations that are not…you can’t…it’s not standing, you know what I mean?” she said, both hands climbing to the ceiling in exasperation.

Asked if she had been disenchanted by Trudeau over the last four years, she said “No” as though the question doesn’t make any sense. “You’re going to try to please everybody, and sometimes it’s not always easy,” she said.

As the evening wore on and the polls begin to close in waves across the time zones, the giant screens began to cough up piecemeal good news of one sort or another for the Liberals fans in attendance. Each time an infographic declared another cabinet minister or Montreal-area Liberal elected, the crowd hooted and applauded. Possibly the only thing that spurred them to express more joy than wins for their own team, however, was the vanquishing of People’s Party of Canada leader Maxime Bernier. When the news broadcasts showed him losing his own seat in Beauce, the Liberal crowd jeered and launched into the chorus of “Na Na Hey Hey Kiss Him Goodbye.”

On the opposite side of the ledger of political spite, there was a smattering of boos in the room when former attorney general and former Liberal Jody Wilson-Raybould was declared the winner of her Vancouver Granville riding.

The networks declared a Liberal victory of some stripe relatively swiftly, but as the number of red-leaning seats ticked steadily upward on the screens, Noor Elsabagh kept a running out-loud tally of the number of additional seats needed to retain majority status. This was the first federal election in which the 21-year-old McGill University student could vote, and she volunteered with several Montreal-area Liberal campaigns, though she cast her ballot in Oakville North-Burlington, where she grew up, and where Liberal Pam Damoff was re-elected.

The Liberals were the right fit because the party aligns best with her personal ideology, and also given strategic considerations, she said, “Which I think is a really unpopular thing to say.”

But the ideological fit went beyond specific policy ideas for Elsabagh, because her parents are immigrants from Egypt. “It was really important for me because, well, [with] a Conservative government they might not have made it at all, with tighter restrictions on immigration and this ideology that immigrants are skipping the line,” she said. “It’s that whole rhetoric that makes a difference.”

Elsabagh’s countdown never did tip over into majority territory. But when Trudeau finally appeared at the convention centre stage after 1 a.m.—oddly, he spoke at the same moment NDP Leader Jagmeet Singh and Scheer were addressing their own supporters elsewhere in the country—he sought to cast the evening’s results as a broader, undiluted victory of sorts. He took the stage holding hands with his wife, Sophie Gregoire-Trudeau, to rapturous cheers, applause and hundreds of cell phones held aloft, including by Gerry Butts, Trudeau’s former principal secretary and campaign advisor, who yanked out his phone to get a snap of his friend addressing the party faithful.

In his remarks, Trudeau interpreted his chastened government’s minority win as a benediction from voters for a broadly progressive approach, and an implicit rebuke of the Conservatives. “From coast to coast to coast, tonight Canadians rejected division and negativity, rejected cuts and austerity, and they voted in favour of a progressive agenda and strong action on climate change,” he said. “I have heard you, my friends, you are sending our Liberal team back to work, back to Ottawa with a clear mandate.”

He offered specific nods to the concerns and frustrations of Quebec, Alberta and Saskatchewan, vowing that his team would work toward a more unified Canada. “To those who voted for our party, thank you for putting your trust in our team, thank you for having faith in us to move this country in the right direction,” he said. “And to those who did not vote for us, know that we will work every single day for you, we will govern for everyone. Regardless of how you cast your ballot, ours is a team that will fight for all Canadians.” It was the closest he came to acknowledging how close he and his party had come to defeat, and to recognizing the missteps and disappointment that got them there.

As he closed in on the end of his remarks, Trudeau repeated a variation what was perhaps his most famous refrain from the 2015 campaign that ended so differently: “Liberals know, as all Canadians know, it is always possible to do better.”

He said it in French, perhaps aware that repeating “Better is always possible” in English would too efficiently summon ghosts of the recent past that loomed taller than the version of the party he now led.