Sophie Grégoire Trudeau's convention speech: "You can count on us, Justin and I" 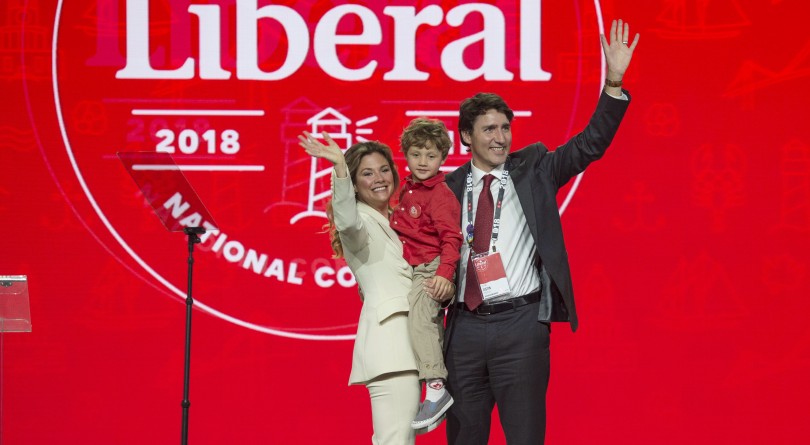 On Friday night, at the Liberal Party national convention in Halifax, Sophie Grégoire Trudeau addressed a crowd of party members, following an introduction by MP Rodger Cuzner. For half an hour, speaking at times directly to her family seated before the stage, Grégoire Trudeau told personal stories and reinforced the importance of volunteers on the ground.

While parts of her speech sounded slightly like a training session for canvassers—”teamwork makes the dream work”—it also showed more than a hint of humanity, as she spoke about her husband as a geek who buys dozens of logic puzzles that she wishes were bottles of wine. The cameras once showed her youngest son in the crowd on the big screen at a moment when he was picking his nose. The audience laughed and stood from their seats for the woman not defined simply as the Leader’s wife, and she reciprocated the gratitude and then some. Here are the words that most stood out.

“Fifteen years ago, when I didn’t know Justin, he was a high school teacher who had just come back from Vancouver to his home in Montreal. He picked me up in an old rust truck that belonged to his beloved brother, Miche. It smelled like moth balls. With his rugged, you know, jeans and boots, very cool, yeah. Hey, it worked.

On a more serious note, things between us got serious from the get-go because I had just come out in the media to talk about how I suffered from an eating disorder, and I wanted to bring awareness and help people out because I was seeing so many people suffering.

I said to Justin, is this going to bother you that I’m talking about such a personal issue so publicly? And he looked at me and said, ‘Sophie, life is about sharing your truth.'”

READ: Can the Liberal national convention in Halifax boost morale?

“The moment in my life where I first truly engaged in this awesome concept of political engagement is one I’ll never forget. It was about 10 years ago. You’ll remember this. I was running with my son Xavier and Justin, and I started selling memberships for his nomination, and I vividly remember spending a lot of time at grocery store parking lots in Papineau selling memberships.

One perk: it was easy to satisfy my pregnancy cravings. And many other perks as well. And then I started door knocking—uh huh, door knocking. Some love it. Some hate it. Very few are in between. Now, when I started out, most people were welcoming—after all we’re Canadians—and I might have gotten a door slammed in my face. Don’t let it get to you … Those millions of real, authentic, one-on-one interactions are why we are here today.”

“We’re liberals, so quitting is not an option. We will push through the hard days so we can celebrate together on the good ones … We persevere because we know someone from our team is counting on us, and we refuse to let them down.

Late nights at the office … Justin sticks to it because of all of you … and I want to tell you, from the bottom of my heart, you can count on us, Justin and I, and we are also counting on you, every single one of you. And Justin, my love, all the people in this room have your back.”

Sophie Grégoire Trudeau addresses Liberal convention delegates in Halifax: "Acceptance, perseverance, courage—this is who we are."