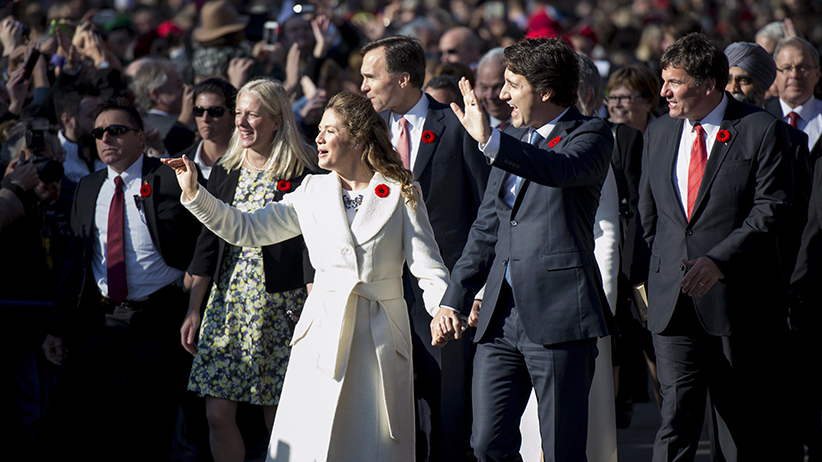 1 / 7 Prime Minister Justin Trudeau, his wife Sophie Gregoire-Trudeau and the Members of Parliament who will comprise his cabinet arrive at Rideau Hall in Ottawa on Wednesday, Nov. 4, 2015. (Justin Tang/CP)

In a moment calculated to showcase a fresh start, Justin Trudeau and his soon-to-be cabinet walked together to the swearing-in ceremony that would make his new government official. But it was Trudeau’s wife, Sophie Grégoire-Trudeau, who stood out among all the dark-suited new ministers in a brilliant white coat adorned with a red poppy. Under that white coat, Grégoire-Trudeau sported a striking knee-length navy and white dress embellished with flowers. The dress was designed by Montreal-born, London-based Erdem—the same designer worn by Kate, the duchess of Cambridge, when she and Prince William arrived in Ottawa in 2011.

While the Huffington Post has crowned Grégoire-Trudeau “Canada’s next style icon” and Metro has debated “the politics” of her wardrobe, Grégoire-Trudeau has also done what many models can only dream of: posing with her husband in the Library of Parliament for a yet-to-be-released Vogue photo shoot.

In almost a decade of conservative black and blue cuts, Stephen Harper’s wife, Laureen, didn’t once make the fashion news as Grégoire-Trudeau has in the last weeks. She “is very personable and compelling,” said Anita Clarke, founder of the Toronto fashion blog I Want—I Got. “She’s not afraid to take chances with her wardrobe, which I’m really enjoying.”

Grégoire-Trudeau was styled for the swearing-in ceremony by Jessica Mulroney, who works in public relations for the Kleinfeld bridal boutique at the Bay. Mulroney is also the wife of Ben Mulroney, the son of former prime minister Brian Mulroney. (Jessica Mulroney didn’t respond to an interview request; the Liberal party declined a request for Grégoire-Trudeau.) CTV’s eTalk, which Ben Mulroney hosts and on which Grégoire-Trudeau was once a correspondent, was the first to get the details of the dynastic clothing connection.

Grégoire-Trudeau, a one-time personal shopper at Holt Renfrew who reportedly helped design her own wedding gown in 2005, is most certainly aware of the now-global stage she has to showcase Canadian designs. She has already helped boost sales at Sentaler, the Toronto-based luxury brand behind the white coat she wore to the cabinet swearing-in and the light grey one she wore to Ottawa’s Remembrance Day ceremony. The white alpaca coat with the wide lapels and detachable fur collar, which retails for $1,800, “was sold out within a few days and is now on back order,” a company spokeswoman said. (The same happens with Michelle Obama and Kate Middleton, whose fashion choices prompt a flurry of sales. Michael Kors ran out of the jacket Obama wore to the 2015 State of the Union address—perhaps assisted by the fact Julianna Margulies had already sported it on The Good Wife—and Kate’s choices, tracked by diligent fashion fan websites, regularly make for sold-out items.)

Toronto stylist Talia Brown compares Grégoire-Trudeau to another political wife, Jacqueline Kennedy Onassis, and says she understands how to dress for different events. 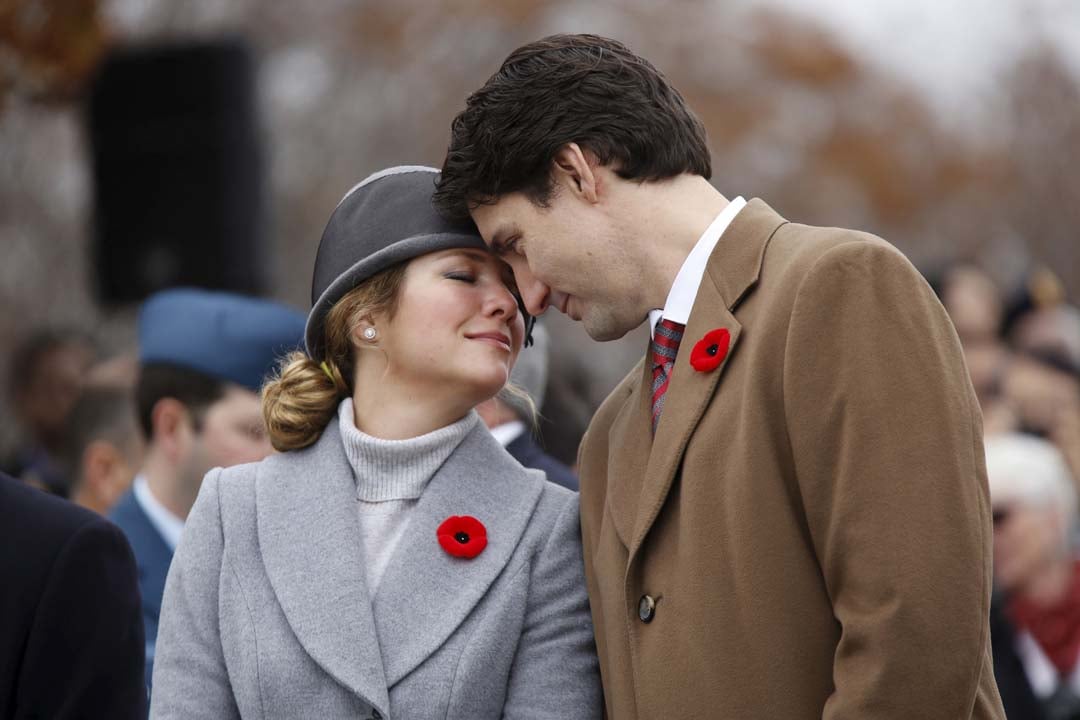 But there’s more to all this than simple aesthetics. Fashion, even in Canada, is a serious business.

“The fashion industry’s a major player economically, end of story,” said fashion blogger Clarke. “It’s a great vehicle for more people to learn about great design through [Grégoire-Trudeau] and what she’s wearing.”

Bonnie Brownlee, a stylist now in charge of the CBC’s marketing and branding, hopes the cool factor of the new Prime Minister and his wife draw out younger Canadians who are less likely to vote. “Because of their style, I think they’re actually probably going to influence people of their age and younger to participate again in politics,” she said.

Brownlee, who worked for nine years in Brian Mulroney’s PMO and went on to work for the royal family, compares Grégoire-Trudeau to the duchess of Cambridge. Grégoire-Trudeau, she says, has “great, comfortable taste. It’s beautiful and it’s current and it’s got a little bit of an edge to it.”

In the end, the clothes Grégoire-Trudeau and her husband choose are simply another way to extend the political brand Justin Trudeau has spent years cultivating—one of openness and authenticity.

“They just sort of bring a realness to their life and you can relate to them a little more with the way they dress,” Clarke said.

Real, by way of a stylist. That’s politics.