Future Steve, you surprise me—er, us. Let's look at the transcript. 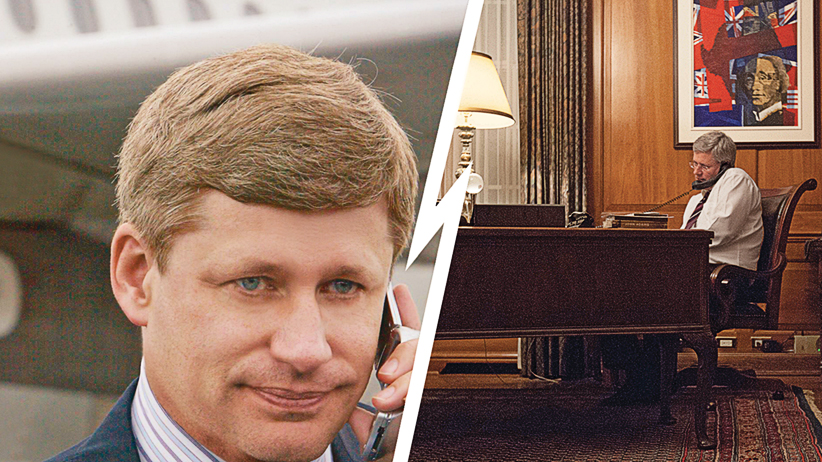 The Prime Minister doesn’t like press conferences. But, with the election campaign approaching, he has once again agreed to sit down for an intimate chat with one of his favourite people: Stephen Harper from 2005.

Stephen Harper 2005: Thanks for doing this.

Stephen Harper 2015: It’s always a pleasure to talk to me.

SH 2005: We’ve been at the helm of the party for well over a decade now, so I hope you don’t mind me asking right off the top: Has anyone emerged as a threat to our leadership?

SH 2015: Obviously, I take pride in the fact that our cabinet has an abundant supply of talented individuals with the credentials to serve as PM.

There is a brief pause—then they both crack up.

SH 2015: No, but seriously: I wouldn’t trust most of them to operate a toaster. From the answers he gives in question period, I’m pretty sure Paul Calandra is actually two nine-year-old boys in a trench coat.

SH 2005: I can’t wait to order and, subsequently, distance myself from his infuriating antics. By the way, I hope I’m not catching you at a bad time.

SH 2015: I was just reading some press clippings. Critics are on our case about our commercials for Canada’s Economic Action Plan —the ones we’re running on TV using millions in taxpayers’ money. Some people think this is a grotesque abuse of the public treasury for partisan ends. But my counterargument has always been: I don’t care what people think.

SH 2015: It’s like I was just saying to the new NDP premier of Alberta—

SH 2005: [Falls off chair] It’s funny—I thought you just said “NDP premier of Alberta” and I literally fell off my chair.

SH 2015: My point is: Any long-serving government is going to face attacks. Right now, everyone’s worked up because we used an omnibus budget bill to backdate a law exempting the RCMP for its illegal actions in destroying gun-registry data.

SH 2005: Wait—we retroactively changed the law? In a budget bill? That sounds like something we would have criticized in opposition.

SH 2015: You’re looking at it the wrong way. Having set the precedent, we can now do this all the time. We can shape Canada’s future—and we can alter its history. We can legalize past election wrongdoing. We can legitimize bribes to senators. We can Hot Tub Time Machine this country!

SH 2005: Hang on. Didn’t we campaign on being honest and transparent?

SH 2015: And we will again. My values in this area are very clear: openness, transparency, accountability—these are all important words to say into microphones.

SH 2015: People are so dismayed by politics that they don’t pay attention anymore. You’d be amazed by what we can get away with. Back in 2012, I replaced Tony Clement with a scarecrow—and maybe five people in total have noticed. Most reporters assume he just loves that flannel shirt he wears every day.

SH 2005: I have to say: I’m a little uneasy that we’ve strayed so far from our core principles. Shouldn’t we be concerned that what happened in Alberta could happen to us? We need a plan.

SH 2015: I like the way me thinks! Here’s what we’ll do: We’ll introduce another new tax credit . . . for people who vote Conservative. If we move quickly, we can get ads on the air in time for the Stanley Cup final. We’ll call it Canada’s Election Action Plan.