Stephen Harper has some new advice for governments everywhere

Politics Insider for May 13: The feds beef up payments to seniors, O'Toole may be the new Scheer and a possible happy ending on the high seas 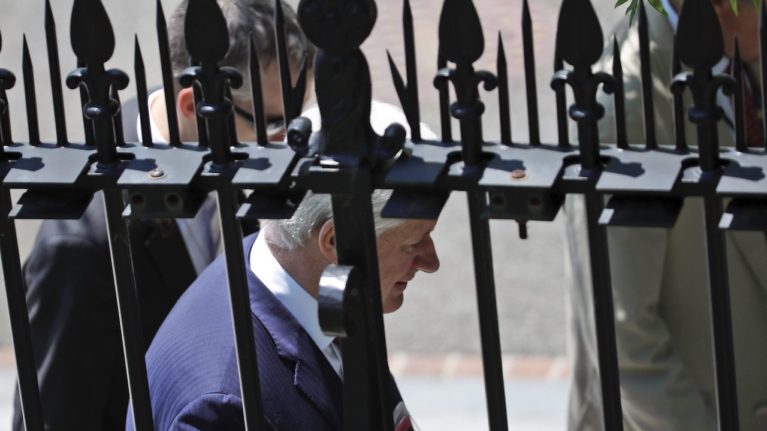 Every Canadian who’s eligible for an Old Age Security pension—that’s about 6.7 million people—will see a federal cheque in the mail for $300. That’s a one-time, tax-free top-up that responds to repeated calls for more financial aid in seniors’ pockets. The feds will also send an extra $200 to the 2.2 million Canadians who qualify for the Guaranteed Income Supplement.

Yesterday’s announcement for seniors went out on Justin Trudeau‘s letterhead, and he outlined the measures in his daily Rideau Cottage presser (#51 since March 13!), but for the second day in a row it was Trudeau’s ministers who led the news cycle. On Monday, Bill Morneau and Navdeep Bains preempted the PM’s big business not-a-bailout news. Yesterday, it was Seniors Minister Deb Schulte and Treasury Board President Jean-Yves Duclos‘s turn.

He’s baaaaack: Former PM Stephen Harper did the thing he sometimes does, which is to say he popped up with some advice for governments. Harper, writing in the Wall Street Journal, insisted that governments should shrink, not grow, as political leaders shepherd their countries out of the public-health crisis and try to avoid economic disaster. One of his arguments: bureaucracies can’t afford, when it comes down to dollars and cents, to expand.

Ad5-nCoV: That’s the name of a potential coronavirus vaccine that’ll be developed using genetic technology from Canada’s National Research Council, reports the Globe and Mail. Ad5-nCoV is currently undergoing human trials in China, and the Canadian Center for Vaccinology at Dalhousie University hopes to expedite trials on Canadian soil.

Last night, Health Canada announced its approval of the first COVID-19 serological test for use in Canada, known as the DiaSorin LIAISON. Serological tests “contribute to a better understanding of whether people who have been infected by COVID-19 are immune to the virus.”

Yesterday, the House of Commons order paper sprang to life with a new government bill to be debated this afternoon in the chamber: An Act to amend the Canadian Dairy Commission Act. The Senate announced its own Friday sitting.

Craig Dalton, the federal veterans’ ombudsman for only 18 months, abruptly announced his departure from the role this week. The Canadian Press reports that his decision surprised even some within the office. On Monday, Veterans Affairs Minister Lawrence MacAulay released a cordial statement that only said Dalton would start “a new chapter in his distinguished career.”

A coalition of human-rights groups in Canada, including Amnesty International, warn in a new report of a “systematic campaign” headed up by the Chinese government that’s “targeting human rights defenders in Canada who take action on human rights concerns in China, in which there is direct and indirect involvement by the Chinese government or its agents.” The situation “may well be worsening,” and the coalition recommends a public inquiry into the “methods and incidents of interference specific to the education sector.”

Is O’Toole the new Scheer? iPolitics reports that a new poll by Mainstreet gives Peter MacKay the edge in first-choice votes in the race for the Conservative leadership. But Erin O’Toole appears to be the preferred second choice of Leslyn Lewis and Derek Sloan supporters, which portends a close contest when the latter two drop off the ballot. Recall that outgoing leader Andrew Scheer squeaked by Maxime Bernier on the strength of being everyone else’s second choice.

Toronto Raptors fans will always remember May 12, 2019 as the day Kawhi Leonard sunk “The Shot” that vaulted his team to the Eastern Conference finals—and, a few weeks later, the franchise’s first NBA championship. Imagine the coincidence, on the one-year anniversary of Kawhi’s miracle, that Tory deputy whip John Brassard—appearing on camera during a parliamentary committee—memorialized another legendary Toronto sports moment on the back wall of his office: a framed photo of José Bautista’s 2015 bat flip.

Rick Pauzé, one of eight Canadian crew aboard the Sea Princess cruise ship anchored off Manila, had been marooned at sea with no clear timeline for his return to Canada. Pauzé’s MP, Terry Dowdall, told Simcoe News the trombonist who lives in Wasaga Beach, Ont., now has some more clarity. He’s now likely to be repatriated on May 15 if Global Affairs Canada can secure all necessary permissions—two months almost to the day from his last time on solid ground in Tasmania.

The U.S.-based National Hurricane Center reported yesterday the “potential for subtropical development” northeast of the Bahamas. The NHC says what’s expected to be an “area of low pressure” could develop “subtropical characteristics” over the next several days. The official start of hurricane season on June 1 is still weeks away. Hey, mother nature. Cool it. Literally.