Nothing matters more to the future of Canadian conservatism than Ontario. The Prime Minister can't leave it alone. 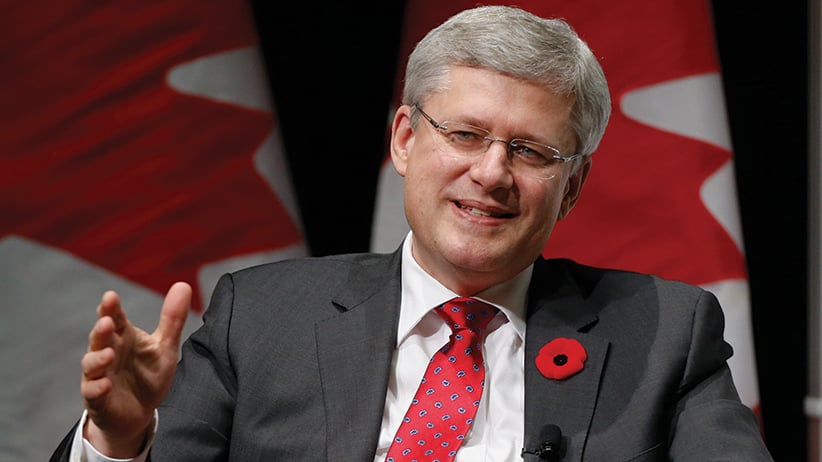 More on the sometimes-comic spat that pits Stephen Harper against Ontario Premier Kathleen Wynne. The other day the Prime Minister went to Toronto, where Wynne works, and met with John Tory, who once ran for premier and has lately fetched up as Toronto’s new mayor. This is the sort of development that elevates farce to the level of art. Wynne decided weeks ago to turn Harper’s refusal to meet her into theatre. Harper wants to play too.

As the column I linked above suggests, my preference is that he take the damned meeting, but I’m more interested in examining motive than in picking heroes and villains. Hers is obvious: Her long-shot re-election campaign last spring, saddled with lousy fiscal results, a slumbering economy and the gas-plant cancellation scandal, turned into sweeping victory after Wynne started feuding with Harper over pensions. (Tim Hudak helped the Liberals, but Wynne’s entourage is quite sure the dispute over an Ontario-made pension scheme was great help to them.)

Harper, too, is clearly motivated, in ways that predate Wynne. Harper walked out of a 2006 meeting with her predecessor, Dalton McGuinty, and went straight to a campaign event a few blocks away for Tory, who was then the leader of Ontario’s Progressive Conservatives. He went to Rob Ford’s mom’s backyard in 2011 to campaign for Tim Hudak, Tory’s equally hapless successor.

Clearly he’s motivated. But why? What accounts for Harper’s unique propensity to meddle in Ontario provincial politics?

Make no mistake, this Ontario thing is a unique behavioural tic of his. Harper has never appeared with a Quebec Liberal (or ADQ or CAQ) leader and called for their election, even back when that might have helped them. I can find no record of his meeting with any Vancouver mayor; while he has surely met a Vancouver mayor, he has never done it in the charged context of his meetings with Tory and Ford. And while he did sit next to Montreal Mayor Denis Coderre at the Jean Béliveau funeral, that was about hockey, not politics. Harper stayed out of the Conservative-vs.-Wildrose electoral confrontation in the province he represents in the Commons. But he has explicitly endorsed the Conservative at every Ontario election since he became Prime Minister. In the constant work of discrediting Ontario Liberal governments, Harper cabinet ministers are expected to pitch in. In 2007 Peter Van Loan called McGuinty “the small man of Confederation.” In 2008 Jim Flaherty called Ontario “the last place” anyone would want to invest. 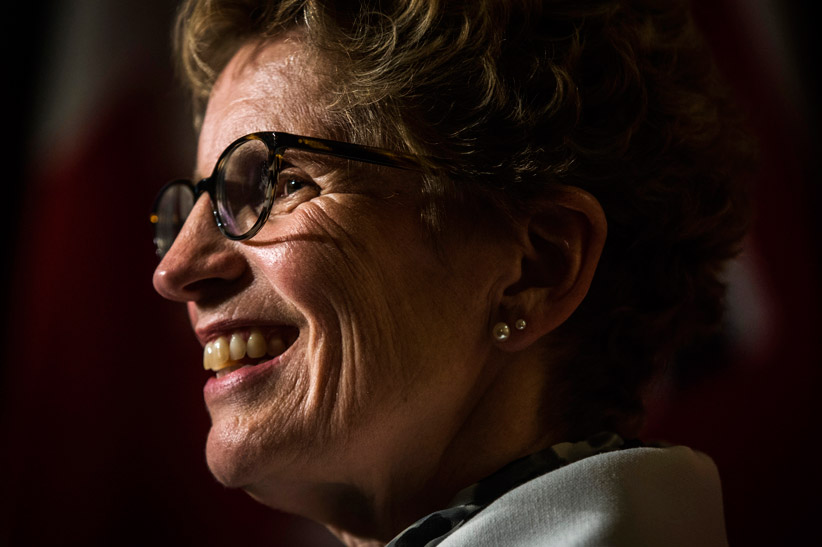 This preoccupation with the fate of Ontario goes back a long way. Much of it is simple conviction. After 11 Liberal years, the province is paying $11 billion a year in debt servicing. Nobody knows how Wynne plans to meet her 2018 target to eliminate the provincial budget deficit. Don Drummond, the former bank economist, was hired by McGuinty to find answers and proposed really serious cuts to the size of the provincial government. Wynne has explicitly charted a different course, preferring “growth” (pronounced “magic”) as the path out of deficits.

Harper would not have governed the way McGuinty did, and certainly not the way Wynne has. But he was brooding over politics in Ontario before either of them were around to annoy him. In 2000 the Canadian Alliance, led by Stockwell Day, lost the only federal election it would ever contest under that name and leader. Harper had publicly predicted the Alliance wouldn’t do well, but the predicted result still made him furious. The object of his anger was “eastern Canada” — basically, Ontario.

Eleven days after the election, the National Post published a bitter column from Harper. Sure, the Alliance had no clear strategy, policy or tactics, Harper admitted, and yet he clamed “this had little if anything to do with the election result.” The real fault lay with the Reform movement’s “rejection by the very electorate that, in creating the Canadian Alliance, it had twisted itself into a pretzel to please.” Which electorate? “Eastern Canada,” which “appears content to become a second-tier socialistic country, boasting ever more loudly about its economy and social services to mask its second-rate status.”

This article, which is familiar to most students of the Harper canon, ends like this: “The rest of the country has responded by telling us in no uncertain terms that we do not share their ‘Canadian values.’ Fine. Let us build a society on Alberta values.”

Most accounts of Harper’s formative writing follow up with a description of the “Firewall Letter,” full of advice for Ralph Klein, signed by Harper and five others and published in the Post six weeks later. But I’m struck by yet another article, much less noticed at the time or remembered since, which the Post published on May 23, 2001.

This one was signed by Harper and Ken Boessenkool, and its thesis was that conservatives could pretty much ignore what was happening in Ottawa because “an emerging political re-alignment in Canada’s provinces … will fundamentally reshape the country within the emerging global economy.” Fun! Who was involved? “The emerging consensus in Queen’s Park, the views of the new government in British Columbia and the historical forces for greater provincial autonomy in Alberta and Quebec will align and successfully challenge Ottawa’s hegemony,” Harper and Boessenkool wrote.

Alberta and Quebec (whose premier at the time of the article was Bernard Landry) are familiar. The new B.C. government was Gordon Campbell’s broad coalition of Liberals and former Social Credit supporters. And Queen’s Park? “We are witnessing a return of Ontario to its deep history of autonomy and resistance to federal domination,” the authors wrote. Their article appeared within weeks of the publication of John Ibbitson’s book Loyal No More, which made the same argument.

The Ontario hero in Harper and Boessenkool’s argument was Oliver Mowat, who as premier from 1872 to 1896 “used every tool at his disposal — pure power politics, legislation, and the British Privy Council — to wrest control away from Ottawa.” But then a “spirit of compliance” took over. “The seeds were sown by Leslie Frost; they blossomed under Bill Davis, who sacrificed Ontario’s interests to Pierre Trudeau’s; and they reached their disastrous apex under David Peterson.”

Now, at last, Queen’s Park was returning to a “spirit of independence,” beginning with Bob Rae’s (!) “‘fair share’ debate over unilateral cuts to federal transfer payments” (!) and continuing with Mike Harris’s declaration that he would, in Harper and Boessenkool’s wording, “do what is right on health care” no matter what Roy Romanow might recommend.

With Campbell’s B.C. adding its force to this discourse, and Alberta and Quebec agreeing as they always had, it wouldn’t matter what Chrétien thought, the authors wrote. “This alignment will be successful because not even Jean Chrétien can withstand a coalition that includes Ontario, never mind one that includes both Ontario and Quebec.”

You start to see Harper’s irritation with an Ontario government that is often portrayed as being allied with a new Quebec government  and which, in style and philosophy, is far closer to David Peterson and Jean Chrétien than to Mike Harris, Ralph Klein, or Stephen Harper. It is a longstanding (and perfectly reasonable) belief of Western conservatives that divergent philosophies held in Ottawa and Queen’s Park dilute the effectiveness of one government, if not both. I remember a Preston Manning news conference, perhaps 15 years ago, at which he argued that since Mike Harris felt one way about some issues and Jean Chrétien felt another, Chrétien should smarten up. Manning used to throw the odd Hail Mary pass like that.

Harper, it turns out, is more fond of spirits of independence at Queen’s Park when they are expressing independence from Liberal governments in Ottawa. And because populations can be led, as Harper has shown over eight years, it’s a big problem for him when Ontario’s population is led, both in terms of legislation and of attitude, away from his ideas. Ontario is still a bigger fact than almost any in Confederation; in the 2000 election, where the “rejection” of Alliance ideas by “Eastern Canada” led Harper to draw his ink from a bitter well, the Alliance won a quarter of a million more votes in Ontario than in Alberta. The formative Canadian political event in the lives of most federal Conservative staffers over 35 (and there are some!) was Harris’s Common Sense Revolution. Ontario is a formidable bastion of Conservative voters, Conservative ideas and Conservative staff talent for a generation after the election of a Conservative government. But because it is not a sure source of any of those things — because it is often tempted by another path — it preoccupies Harper the way the prodigal son preoccupies the father in Luke.

The purest expression of this is the amazing transfer-payment two-step Harper executed in 2013-14 and, we learned today, 2014-15. Despite the best work of the Parliamentary Budget Office, it’s not widely understood what a swift kick, aimed squarely at Ontario’s finances, the federal government administered a year ago. A longstanding rule to the effect that no province can receive less from all federal transfers in one year than it received the year before. The Harper government suspended that rule for Ontario for the year now ending, at a cost of $1.2 billion to Ontario.

2014 was, you’ll recall, an election year in Ontario. Deficits are a chronic problem there. Ensuring that Wynne’s government would face $1.2 billion more of a problem than if the rules had simply been applied the way they’d always been applied before was a pretty good trick for tripping Wynne up. It didn’t work. This year it’s Harper who has to face voters, so Joe Oliver was out early spreading word that Ontario’s transfers will grow markedly, the way they do when a one-time accounting trick no longer applies. The fight to ensure Ontario finds its way to the proper quadrant of the Liberal-Conservative, independence-compliance grid — ideally, Conservative and compliant — can await Harper’s re-election. If he wins that, he will get back to the work of his lifetime. Harper is, as you’ll recall, a son of Ontario. You can leave, but it never leaves you.