Paul Wells: Sources say the former PM's main goal behind his abrupt resignation is to free himself to counter Charest's leadership bid 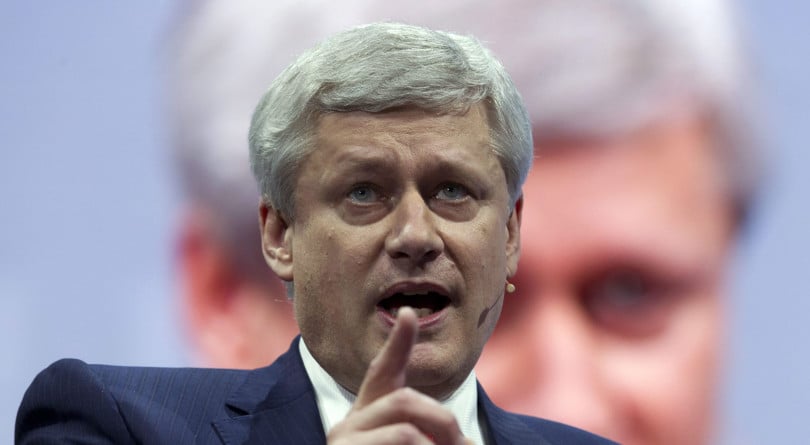 Former prime minister Stephen Harper has suddenly resigned from the board of the Conservative Party of Canada’s fundraising arm, as the party descends into organizational chaos and bitter recrimination in the first week of its leadership campaign.

And since the first version of this article was posted, two top Conservative sources have told Maclean’s that Harper’s main goal in resigning is to free himself up to block Jean Charest’s campaign for the party leadership.

Charest, the former Quebec premier who was Progressive Conservative party leader from 1993 to 1998, called Harper before Christmas to seek his blessing for a run, a source with knowledge of the situation said. Harper refused to give it, saying the party is no longer the party Charest led. As it becomes increasingly clear that Charest is serious about a run, Harper has decided to become directly involved in the campaign, sources said.

Harper and Charest were close, and worked effectively together during Harper’s early days as prime minister. But they had a falling out over Charest’s 2007 use of a $2.3 billion federal transfer to the Quebec government to pay for tax cuts to increase his chances of re-election.  More generally, as a Calgarian from the Reform roots of the party, Harper is suspicious of Charest as a Quebecer who ran the Liberal Party of Quebec for 15 years.

Harper had been urged by friends and party officials to resign from the Conservative Fund Canada board after the messy resignation in December of the party’s leader, Andrew Scheer, and the controversial dismissal of its executive director, Dustin Van Vugt, over expenses Scheer had been incurring. Conservative sources said Harper’s eventual departure “at a quiet moment” seemed likely. But instead he resigned this week, without notice, during a trip to India where he attended a forum on international relations and security.

“The Fund’s in disarray,” a veteran senior Conservative said.

The Conservative Fund Canada is responsible for the finances of the Conservative Party, which has routinely been a fundraising powerhouse since it was formed from the merger of the Progressive Conservatives and the Canadian Alliance in 2003. The head of the Fund has always been the former Senator Irving Gerstein, who rarely discusses party operations in public and is not much more chatty in private. When Scheer resigned in December over his handling of the 2019 election campaign, a simultaneous controversy erupted over his personal and household expenses. Van Vugt, as executive director of the party, acknowledged that he had arranged the use of party funds by Scheer, along terms that would have been available to previous Conservative leaders.

What’s in dispute is whether van Vugt was the only party official who knew about the expense arrangement. Conservative sources say Gerstein would normally also have known. And so, in theory, should the rest of the Fund board. But that’s not how it worked.

The veteran senior Conservative source said in fact Gerstein has regularly frozen out other parts of the party’s executive structure. Harper used to like it that way, when he was the leader: the party’s operations arm, the National Council, reported to him through a party president elected by the council. And the financial operation, the Fund, reported to Harper through Gerstein. Harper demanded that the party be organized this way upon the creation of the Conservative Party, because its legacy parties, the PCs and the Alliance, had racked up a combined $4.5 million in debt.

Separate financing and operations branches ensured fiscal discipline. Harper integrated and reconciled all of it. He didn’t need anyone else to know details. He was the leader. But in December, when news of Scheer’s expenses cleared, Harper learned that a system he designed was no longer giving him information he felt he needed.

Emails to Harper loyalists in the party did not immediately receive replies on Wednesday. There remains considerable anger in the party over the sudden dismissal of van Vugt—who ironically was pressed into service as the party’s executive director in 2014 after his predecessor, Dimitri Soudas, was found to have been meddling in a nomination battle which Harper had ordered him to avoid.

If Gerstein and van Vugt knew about the arrangement, some Conservatives say, it is hard to justify only one of them leaving.

In a statement to Maclean’s in December, Gerstein said the only meeting between the Fund and Scheer took place on June 6, 2017, in his parliamentary office. In attendance were Gerstein, Louis Leger, chair of the audit committee, Scheer and Scheer’s principal secretary Kenzie Potter. “The Fund indicated its support for Mr. Scheer and that financial requests for his election were welcome,” Gerstein said in December. “Not one request was ever made by Mr. Scheer or his representatives either formally or informally to the Fund.”

“Dustin van Vugt has a lot of friends,” one well-placed Conservative source said. “And whatever you think of Scheer, the fact that [van Vugt] took the fall for [Scheer’s expenses] means, long-term, that Irving’s toast.”

Harper may also have wanted to distance himself from a process that was increasingly dominated by two of his former loyalists, Kory Teneycke and Jenni Byrne. Teneycke was a key organizer of the campaign to remove Scheer as leader, beginning with televised comments on election night. Byrne is reported to be a lead organizer of Conservative MP Pierre Poilievre’s expected candidacy for the leadership.  Teneycke’s company, Rubicon Strategy, has been widely rumoured to be working for Peter MacKay as he prepares to run. But in an interview with Maclean’s, Teneycke said he is not personally working for any candidate’s campaign. The other members of the firm may make other decisions, he said.

Byrne was the director of the 2015 Conservative campaign, Harper’s last as an incumbent prime minister, and Teneycke was that campaign’s spokesman. Neither has been closely involved in party operations since. A post-mortem report of that campaign was prepared by several figures inside the party and out: Brian Loughnane, who ran four campaigns for a conservative coalition in Australia that coincided with Harper’s tenure as Canada’s Conservative leader; John Walsh, who was then the Conservative Party president; van Vugt; and Diane Finley, the Haldimand-Norfolk MP who was a former Harper cabinet minister.

Harper’s departure from the Fund will not mark the end of his close involvement with the party. Another source close to Harper said Fund members are required to stay neutral during leadership campaigns and that Harper wants more “latitude” than that rule permits.

—with files from Stephen Maher