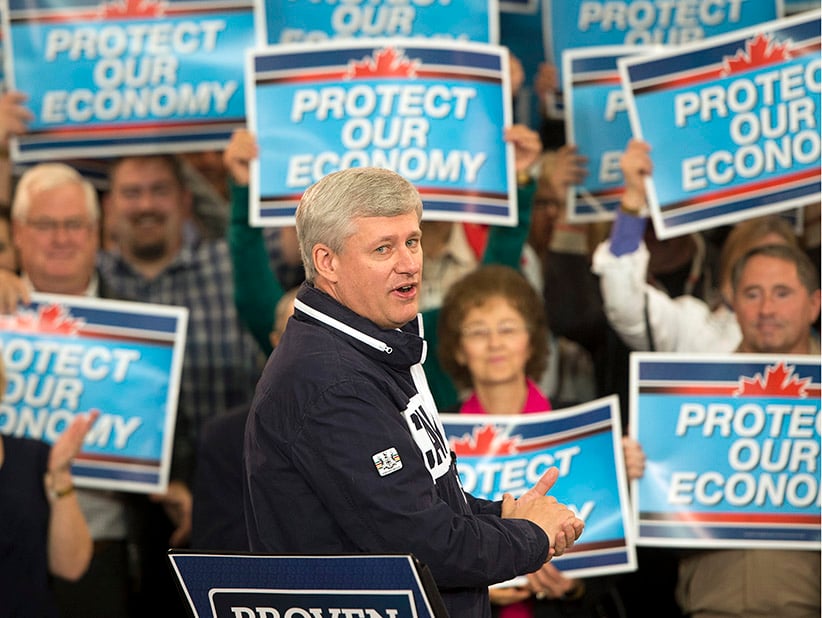 For a guy whose staff says he has foresworn any comment on his successor, Stephen Harper is turning into a bit of a chatty Kathy. First, during the heady days in July when it seemed Conservatives would campaign relentlessly against Justin Trudeau’s out-of-court settlement with Omar Khadr, Harper wrote on his Facebook page that the settlement was “simply wrong.” Now, Harper has penned a memo asserting that just about everything the Trudeau government is doing in NAFTA negotiations is a strategic catastrophe.

Let’s look at his claims. But first, let’s dispense with two red herrings.

First, the Trudeau Liberals skipped straight to questioning Harper’s patriotism. A PMO staffer tweeted that Harper “would rather side with US, abandon Cdn values, jobs and interests.” This is a familiar dodge. “At this crucial moment, Canada needs unity,” says everyone who’d rather avoid a debate, ever. In fact, Canada can stand a debate on anything, at any time: not only is that what democracy looks like, it was also pretty robustly demonstrated when we got into the free trade game with the United States, thanks to two knock-down, drag out elections on the matter, in 1911 and 1988. In the latter contest, the Liberals were the ones carping about government policy, as one or two of today’s older cabinet ministers may recall. Sauce for the goose is perfectly legitimate comment for the gander.

Second, since Harper’s memo was written only for clients of his consulting firm, it could perhaps be protested that he didn’t intend for it to become public. This is not credible. In politics he routinely had staffers write “private” correspondence that magically found its way into media hands, which in fact was the point of the exercise. It doesn’t matter whether that was his intent this time around; he of all people should have known it could happen.

On to the former prime minister’s argument. First, as Canadian Press reporter Alex Panetta reports, Harper “suggests Canada has been too quick in rejecting American proposals as a ‘red line,’ or ‘poison pill.’ He said such knee-jerk refusals are only a viable strategy if you truly believe Trump cannot cancel NAFTA — an assessment Harper does not share.” Panetta quotes some trademark weary-eyed realism from the former PM: “Canada’s government needs to get its head around this reality: it does not matter whether current American proposals are worse than what we have now. What matters in evaluating them is whether it is worth having a trade agreement with the Americans or not.”

That’s true! A substantially degraded deal could, conceivably, indeed be better than none. But it’s odd to suggest the Trudeau government imagines NAFTA is un-killable. They talk about Trump cancelling it all the time. Some of the “poison pills” Chrystia Freeland has identified do look eminently survivable: one of them is U.S. demands for a relaxing of supply management for dairy and poultry products, a sacred overpriced cow of Canadian agriculture that nobody will miss five years after some brave government finally gives it the heave-ho. But you know who defended supply management tooth and nail during the Canada-EU and TPP trade rounds? Stephen Harper is who.

On the other hand, some of the so-called poison pills really would put into question the worth of a trade agreement if they were accepted. Chief among these is a constant, eternal, five-year series of sunset clauses by which the deal would automatically collapse if any party decided not to renew it. That’s the same as not having a trade deal. Trade deals exist to buy stability and predictability in trading arrangements. A deal without stability is like a bucket with a hole in the bottom, good perhaps for firewood but not for the things you usually ask from a bucket.

Incidentally: Know where the term “poison pill” comes from, in the NAFTA context? From Thomas Donahue, the president of the U.S. Chamber of Commerce. “There are several poison pill proposals still on the table that could doom the entire deal,” Donahue said in an early-October speech. “All of these proposals are unnecessary and unacceptable.”

And finally: What would Harper have the Canadian bargaining position be? In the absence of red lines drawn in public, apparently he would have the Canadian negotiating team tell the Americans, again in public: “We have no bottom line. We will not walk away from the table at any point, for any reason, because we’re pretty desperate for a deal.” I admit I was home sick the day they taught trade strategy at school, but on the face of it this doesn’t seem like a super bargaining stance.

Harper’s second worry is that Canada has tied itself too closely to Mexico, which is, in the world of the wall-building Trump, maybe barely a shade better than partnering with Hillary Clinton. “In fact, the U.S. is both irked and mystified by the Liberals’ unwavering devotion to Mexico.”

A few reactions are possible. One, epidermal: You know what? Canada is irked and mystified by crisis talks over a trade deal that has been overwhelmingly a boon to this country. Life is full of irk and mystery. Suck it up.

A second reaction, more reasoned: NAFTA is designed and has richly evolved as a three-party deal. The departure of any partner would involve costly disentanglement of integrated economies among all three. Mexico’s tariff wall is high and would suddenly be raised against Canadian goods. And the bilateral fallback, the Canada-U.S. FTA of 1988, is lousy by modern standards. And finally, as a reader pointed out to me on Twitter, for as long as Canada can keep Mexico onside, the Congressional NAFTA coalition will include members from states with heavy trade exposure to Mexico as well as Canada. Broad parliamentary coalitions used to be a Harper specialty.

The third reaction is that this is a familiar tune from Harper. Safe communities were a top-line objective of his government, from both a policy and branding perspective; he viewed Mexico almost exclusively as a problem. He told his counterpart Felipe Calderón in 2009 he was imposing visas, [UPDATE: My source for that was on the Mexican side; since this article was posted, it’s been disputed by someone on the Canadian side, who says there was plenty of groundwork for the call. – pw]. He cancelled the last two rotating “three amigos” summits, with the Mexican and U.S. presidents, that would have been held on Canadian soil. A former Harper government staffer wrote to me in mid-2016, after Harper had left office, to explain why: Harper was “concerned that past Liberal governments, especially [Paul] Martin, had traded away a long-standing successful and unique bilateral relationship for some photo-ops.” Martin had, in this view, “joined with a country we have limited shared interests [with] but who the U.S. has significant security, immigration and trade problems with, and now parts of our relationship were being lumped in with theirs and dealt with through this lens, and it was having practical negative impacts.”

So all the practical reasons for keeping NAFTA talks a three-member affair, if possible, for as long as possible—trade integration, tariff risks, the lousy bilateral Canada-U.S. alternative, and U.S. coalition-building considerations—mean nothing to Harper, because he’s worried about what the neighbours will think. This is a fair calculation. But it’s not the only conceivable calculation. And throughout Harper’s memo, as reported by Panetta, there’s another familiar feature of Harper’s thinking as a political strategist outside government: an inability to imagine that somebody else might simply have a different playbook.

Hence Harper’s shame—the word seems precise—at the spectacle of a Canadian government bringing demands to the table that the Americans didn’t bring. These are the famous four horsemen of the lefty-NAFTA apocalypse, the Trudeau-proposed Indigenous, labour, environmental and gender chapters. Never mind that labour and environmental side agreements featured in the NAFTA lexicon as early as 1993, or that Donald Trump has actually shown fitful interest (the only kind this president can offer) in labour and gender issues. No, Harper is aghast: “Did anyone really think that the Liberals could somehow force the Trump administration into enacting their agenda—union power, climate change, aboriginal claims, gender issues? But while the Canadian government was doing that, the Americans have been laying down their real demands.”

READ: NAFTA talks should stick to helping consumers and taxpayers, not pet clauses

No report from the actual negotiating sessions has said that any of the four chapters Harper mentions has been met with substantive American concern. The sticking points are all elsewhere. So maybe Trudeau might get away with some of his demands. And if not, I’m not sure it’s unwise to walk into a negotiation with demands you can afford to see rejected. In a give-and-take, easy gives are not a self-evidently bad idea.

But what’s most striking about Harper’s memo is that its attitude is so familiar. I don’t know everything about Harper, but in researching two books about him I did not find any example of him praising a contemporary prime minister who wasn’t himself. This was especially true if the Canadian prime minister found himself in conflict with an American.

When Ronald Reagan died, Harper called him “the Churchill of his era… an inspiration to us all.” When Pierre Trudeau died, Harper wrote: “Yes, he continues to define the myths that guide the Canadian psyche, but myths they are.” Harper used his first speech in the Commons as Leader of the Opposition in 2002 to criticize Jean Chrétien on his relations with George W. Bush, and he wrote to the Wall Street Journal a year later to apologize for Chrétien’s stance on the Iraq war.

These are all defensible positions, but they’re also striking in their consistency. It has never been obvious to Stephen Harper that a Canadian prime minister could have a legitimate reason for disagreeing with a Republican U.S. president. Or, for that matter, with Stephen Harper. NAFTA could fall apart any moment. That Canadian actions might cause that sad event would come as a surprise to just about any observer with even a cursory knowledge of the unique personality inhabiting the White House.