Stephen Poloz explains what Justin Trudeau is up against

Ottawa is buoyed by a frantic energy. But the Bank of Canada governor warns that there's no easy policy fix for the economy—it needs to work itself out 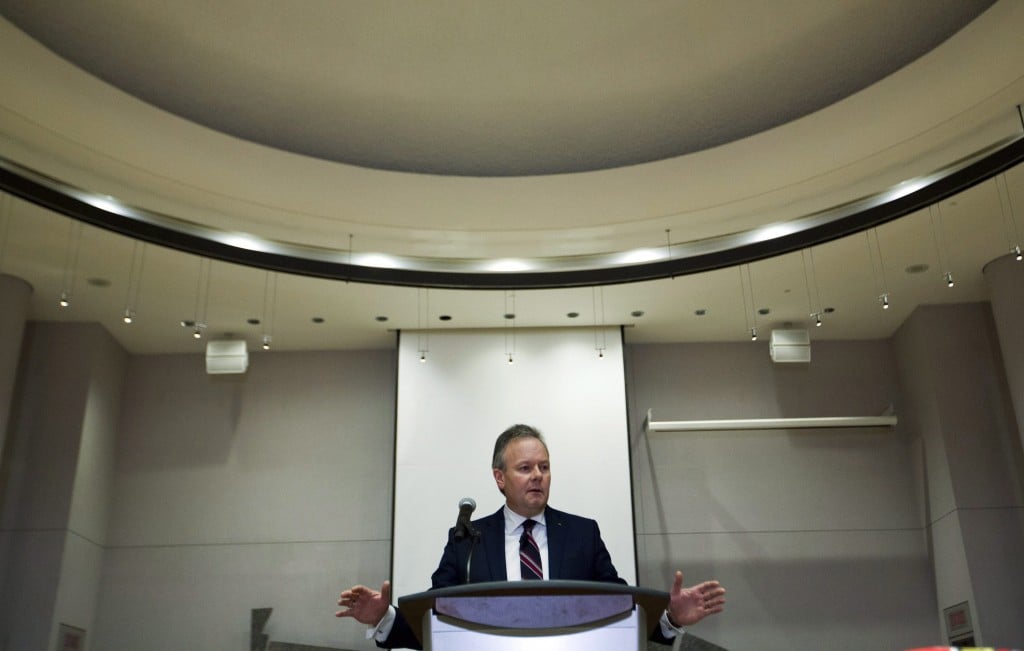 There are a lot of moving parts in an economy like Canada’s, but often it’s helpful to narrow the focus, especially when you’re trying to sort out possible political responses to economic problems. Bank of Canada governor Stephen Poloz helped out today by neatly quantifying the pain Canadians are feeling as a result of the plummet in the price of oil and other natural resources.

In a breakfast speech in Ottawa, Poloz first reminded the business crowd of the blissfully long stretch, lasting from 2001 to about mid-2014, when strong commodity prices lifted the Canadian economy. “Since then, however, falling world prices for oil and other commodities have reversed much of that rise,” he said. “Measured at annual rates, this represents a loss of more than $50 billion in national income, or about $1,500 for every Canadian.”

We all know what $1,500 is, but how much is $50 billion? Well, 10 times more, for instance, than the infrastructure boost that the Liberals pledged in their winning fall election campaign. Justin Trudeau’s platform promised a doubling of federal infrastructure spending to $10 billion from $5 billion in each of the next two fiscal years. (Asked how much the infrastructure injection might stimulate the economy, Poloz declined today to discuss the potential impact.)

The comparison brings home how hard it will be for any government action to ease the wrenching adjustment the Canadian economy is now going through. Of course, that pain isn’t evenly distributed. Poloz noted that since the fall of 2014, the unemployment rate is up more than two percentage points in Alberta, Saskatchewan, and Newfoundland and Labrador, the three main oil producing provinces, but flat in the rest of the country.

Related: Why Newfoundland is the Rock in a hard place

Don’t imagine that a merely regional slump in energy and mining is anywhere close to being equalled yet by a bounce in other parts of the country. Poloz said that’s coming, as the decline in the value of the petro-linked loonie makes Canadian manufactured exports cheaper, but he was careful not to predict exactly when those watched-for positives would outweigh the all-too-present negatives.

The transition won’t be quick, though. “The tension between sectors and between regions will remain a feature for some time, measured in years,” he said, adding: “It typically takes three or five years to adjust to a significant movement in your terms of trade, which is what we’re going through.”

So Finance Minister Bill Morneau must deliver the Trudeau government’s first budget next month, or perhaps the month after, in what’s still the early phase of a tough adjustment, which might last through the Liberals’ entire first mandate. Making middle-income Canadians feel that the government is delivering the promised new era of buoyant incomes and better expectations in this climate will be a huge challenge.

One possible reaction to all this is might be to bemoan the misguided over-emphasis on oil of the Stephen Harper era. Trudeau has in the past identified that as a basic economic-strategy blunder. In a speech around this time a year ago, he asked rhetorically: “So, first question: Why would the Harper Conservatives bet so much of Canada’s future on oil prices staying high? Because they didn’t—they never do.”

Poloz agreed today that the fall of oil and other resource prices has followed “an oft-repeated, textbook cycle.” Still, when asked by a reporter after his speech what lesson Canada should draw from this painful, familiar experience, he didn’t profess to have any hard-earned wisdom to impart.

“Some have talked about, ‘Did we become excessively enthusiastic or excessively exposed to energy?’ I usually resist that argument, because the market was telling us people were willing to pay up to $100 a barrel for oil,” he said. “It would have been quite unusual behaviour to say, ‘No, I’m not going to take advantage of that by investing more in the oil patch.’ ”

Parliament Hill is crackling with expectation these days. The mood generated by Trudeau is all about doing stuff. But transferring that sense of bustling activism to the wider economy will be far harder than, say, launching an inquiry, scheduling a meeting with the provinces, or starting a policy consultation process.

In fact, Poloz went so far as to declare that there is nothing much to be done, except wait for the economy to pivot toward higher investment and employment in the non-resource sectors. “There is no simple policy response in this situation,” he said flatly. “The forces that have been set in motion simply must work themselves out. The economy’s adjustment process can be difficult and painful for individuals, and there are policies that can help buffer those effects, but the adjustments must eventually happen.”

It’s odd to hear anybody in Ottawa talking that way these days.