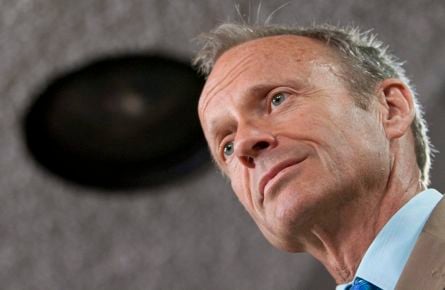 Stockwell Day has come under what has to be unwelcome scrutiny over his remarks yesterday about how unreported crime justifies spending billions on new prisons. I guess that’s to provide cells in which to lock up the unreported criminals. The upside is that crowding shouldn’t be an issue.

Day is Treasury Board President now, but used to be Public Safety minister, which might explain his willingness to hold forth on law-and-order issues. In the same eventful news conference, he offered a rather dramatic justification for the government’s push to make sure more convicted criminals serve long terms behind bars. This quote is a bit shambling, but here’s a chunk of what he said:

“We’re really concerned about serious, repeat, violent crime; about the fact that these type of criminals through other administrations, certainly under the Liberal administration—for instance, crimes like arson, crimes like home invasion with aggravated assault, which has to be one of the most grievous types of crimes you can think of, people’s houses being broken into and people, in many cases, senior citizens, being grievously assaulted—previously there were too many cases when those were addressed with what’s called conditional sentencing. That means the criminals in that case get sent home. They don’t have to go to jail. That is not a deterrent. So we’re going to continue to look at serious violent crime and having serious and mandatory jail terms there.”

I understood him to say that thugs who invaded the homes of senior citizens and assaulted them have often been let off without going to prison. At least, that was how it was back when the Liberals ruled. Could this possibly be true? I went looking for information on sentencing in home invasion cases. I found an informative ruling from the Ontario Court of Appeal, handed down on Dec. 8, 2006, which discusses the matter in detail.

The appeal court had been asked to reduce the eight-year sentence imposed by a lower court on a man named Wade Wright, one of five armed robbers who broke into a Richmond Hill, Ont. home in 2004, and terrorized the family inside. Wright’s lawyers argued that eight years was at the stiff end of the customary five- to eight-year range for convictions involving home invasion, and too long in their client’s case.

But the appeal judge, Justice Robert Blair, noted that while five to eight years had once been the normal range, courts across Canada had by then moved toward longer sentences. Blair cited home invasion convictions in which the sentences were 10, 12 and 13 years, and quoted judges, stretching back to a key 1996 ruling, expressing outrage at criminals who violate the sanctity of the home.

Not surprisingly, politicians in that period had picked up on the same public anger over home invasions that was being echoed from the bench. In 2002, the Liberal government of the time amended the Criminal Code to explicitly make home invasion, which isn’t a separate offence, an aggravating factor that judges would have to take into account when they were handing down sentences for related crimes like unlawful confinement, robbery, extortion, and breaking and entering.

So by the time the Conservatives took office in 2006, the courts had been seized by the seriousness of home invasions for at least a decade, and were sending offenders to jail for longer. And, in Ottawa, the government had changed the law to make sure those harsher sentences were imposed as a matter of course.

Have there been exceptions of the sort Day described—old people beaten in their own homes, and yet their assailants let off with conditional sentences? I’m not sure how that could happen.  For one thing, conditional sentences—in which the criminal serves time in the community under supervision and court-ordered restrictions—are only allowed when imprisonment would have been less than two years. But sentences in home invasion convictions, as we’ve seen, seem to be much longer than that.

I’ve asked Day’s office, and the offices of the Justice and Public Safety ministers, to provide material supporting his statement yesterday. So far, they have only passed along the broad Statistics Canada data on criminal courts, which shows that 4.4 per cent of adult criminal convictions result in conditional sentences. There’s nothing in the data that I can see, though, to shore up Day’s version of reality.

I’m left to conclude that, in fact, lengthy prison sentences have long been the standard punishment for those convicted of crimes that involve home invasion. Judges and the previous government took note of society’s natural outrage over this kind of crime, and acted accordingly. What Day said looks to be an unfounded attempt to exploit public outrage over crime in general, and the fears of senior citizens over having thugs break into their homes in particular.

A couple of points for anyone interested in delving further.

1. If you’re interested in the stats for the sorts of sentences handed down, you might want to look at this recent Statistics Canada report, Adult criminal court statistics 2008-2009. (I clicked on “full article in pdf.”) The table on page 29, “Guilty cases by type of sentence, adult criminal court, Canada, 2008-2009,” is the place to start for info on conditional sentences. For the basic definitions (including the important limits on when conditional sentences are allowed) check out the definitions section that starts on page 21 of the pdf version.

2. I’m sorry that I’ve been unable to find an online source to link to for the Court of Appeal for Ontario case I refer to above. For those more adept at searching out legal documents, it’s Her Majesty the Queen and Wade Wright, Dec. 8, 2006. But here’s a long quote that might be of interest from Justice Blair’s decision, where he talks about the range of sentencing, starting at a low of four or five years, in home invasion cases:

The cases to which we have been referred, and which my own research has uncovered, reflect a gamut of sentencing dispositions in “home invasion” cases from as low as four or five years, to as high as eleven to thirteen years – with the suggestion that even higher sentences may be reserved for situations involving kidnapping, the infliction of serious injuries, sexual assault or death. Whether a “range” of that elasticity is of much assistance to trial judges in their efforts to preserve sentencing parity for similar offences involving similar offenders – apart from signalling that a significant penitentiary jail term is generally called for – is not clear to me.  The downside of attempting to articulate a range for a type of crime that can manifest itself in such a wide variety of ways, and be committed by such a wide variety of individuals, is that the “range” becomes so broad, it is virtually meaningless.  Nonetheless, to the extent there can be said to be a range in home invasion cases, it would appear that the one that currently exists is the expansive one outlined above.

In my view, however, “home invasion” cases call for a particularly nuanced approach to sentencing.  They require a careful examination of the circumstances of the particular case in question, of the nature and severity of the criminal acts perpetrated in the course of the home invasion, and of the situation of the individual offender.  Whether a case falls within the existing guidelines or range – or, indeed, whether it may be one of those exceptional cases that falls outside the range and results in a moving of the yardsticks – will depend upon the results of such an examination.  I agree with the British Columbia Court of Appeal in A.J.C. (at para. 29), however, that in cases of this nature the objectives of protection of the public, general deterrence and denunciation should be given priority, although of course the prospects of the offender’s rehabilitation and the other factors pertaining to sentencing must also be considered.  Certainly, a stiff penitentiary sentence is generally called for.