Stompin' Tom and the places he put in songs

John Geddes on why we love Connors 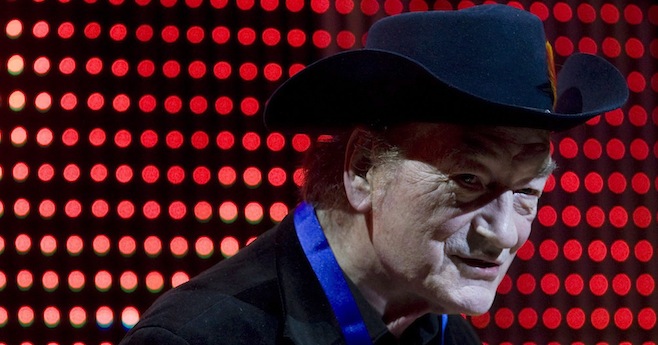 Some years back I was on a train heading down to Toronto from my home in Northwestern Ontario when a freight derailed on the track in front of us. As the conductor walked through the cars announcing that we would have to back up and detour onto the tracks of the Algoma Central Railway, I know I can’t have been the only passenger whose mind turned immediately to these lyrics:

She’s on a bar-hoppin’ spree back in Sault Ste. Marie,

Because of me she’s now fallen star.

She could have been true, but I left her in the Soo,

And I travelled north upon the A.C.R.

The great accomplishment of Stompin’ Tom Connors, whose passing has prompted such a remarkable outpouring of heartfelt memory, was to pluck the A.C.R., and so many other names of Canadian towns and roads and rivers and more, off the map and put them unforgettably into song.

The names of American places, especially those of the mythic South, have so often been sung and for so long that they strike our ears now as naturally at home in a tune.  Not so Canadian proper names. But Stompin’ Tom sang so many of them, and so proudly, that he amounted to a one-man folk corrective to this imbalance.

The reason we loved it so much was that he sang with such irrepressible good humour. Self-consciously nationalistic as he surely was, he never came off as forcing a lesson on us, geographic or otherwise. It was pure fun to hear him reference, say, “rippin’ the tar off the 401,” not just any old highway, in Bud the Spud. I live in Ottawa now, and can’t pass the turnoff to nearby Carleton Place without thinking that’s the town where, so Tom told us, they believe local bodies of water were formed by sweat dripping off the face of Big Joe Mufferaw.

My father had his 1971 LP Live at the Horseshoe (on which he tellingly covered I’ve Been Everywhere, into which Hank Snow dropped a few unexpected Canadian place names in with the auctioneer-paced listing of American towns and cities).  Back in the seventies, listening to Stompin’ Tom every now and then was somehow entirely acceptable for teenagers who fled the room when Tommy Hunter’s TV show came on (and I observe this now only to report on those times, and not out of any lasting lack of regard for Canada’s Country Gentleman).

So it was really no surprise later when hipsters of the cow-punk and alt-country varieties embraced Stompin’ Tom—he’d never seemed square—and he hugged right back, memorably rhyming “twang,” k.d. lang”  and “rangytang” in one of his funniest choruses.

But that sort of downtown credibility was of secondary interest. He’d long since sealed his deal with such a wide swath of the Canadian public that he defied easy pop-culture categorization. I saw him back in the late 1970s in the packed gym of Red Lake District High School, and he was plainly there for everybody.

The gym was new and, as I recall, for the sake of the floor we all had to leave our shoes and boots in the hallway outside. Keeping the crowd sock-footed was just as well. When he got that black boot flying up on stage, the temptation to stomp along, to the detriment of the fresh hardwood, would have been irresistible, especially at moments like his Gumboot Cloggeroo evocation of an East Coast party:

And the girls from way down Tracadie

You can imagine how the place was rollicking during that one and many more. The gym stilled down a good deal, though, when Tom sang Fire in the Mine to that crowd of miners and miners’ wives and their kids. I’d like to imagine they’ll get a bit quiet at some spare moment today, too, there and anyplace he ever mentioned in a song, or would have gotten around to if a troubadour’s life didn’t have to end.