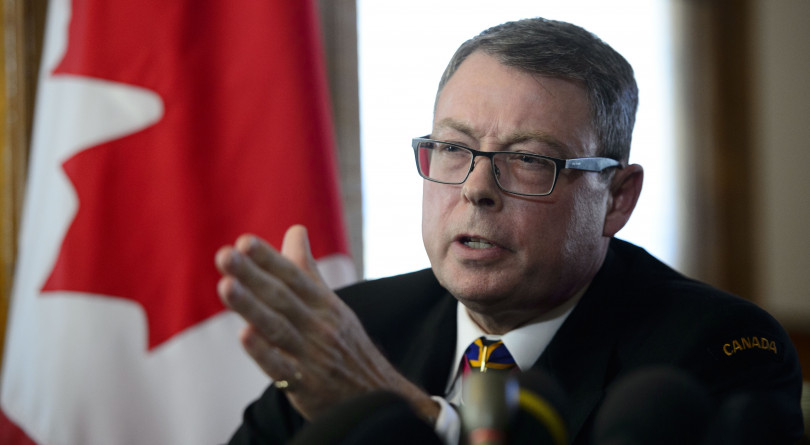 Vice Admiral Mark Norman reacts during a press conference in Ottawa on Wednesday, May 8, 2019. The charges against Norman were dropped. (Sean Kilpatrick/CP)

“You are free to go.” With those words the judge who’d overseen pre-trial hearings in the case of Vice-Admiral Mark Norman brought the legal saga to its end after prosecutors chose to stay the charges against him. However the drama surrounding Norman’s case will continue to unfold in the coming days.

On Norman’s way into court outgoing Liberal MP Andrew Leslie, who we learned last week was set to testify against the government on Norman’s behalf, walked up and hugged him. (Twitter video)

It seems that new information came from former Harper cabinet ministers, none of whom were interviewed by the RCMP. (CBC News)

Stay tuned: At a news conference afterwards Norman said he expects to be reinstated in the military. And sounding not-unlike former cabinet minister Jane Philpott discussing the SNC-Lavalin affair in March, Norman also teased that more details are to come about how the case unfolded, saying he has “an important story to tell that Canadians will want and need to hear. It is my intention in the coming days to tell that story — not to lay blame, but to ensure that we all learn from this experience. … There are lots of questions that need to be asked and answered about this whole process the last couple of years. And I think some people who have been involved in this need to reflect on what happened and why it happened and their role in it. Ultimately they’ll make whatever decision they want or need to make and I would like to think people will do the right thing.” (Norman’s full statement)

From Mark to Meng: On the other side of the country, lawyers for Huawei executive Meng Wanzhou were in court arguing “political interference” was behind their client’s arrest in December. They pointed to comments by President Donald Trump who mused that he might intervene in the case if China agreed to a trade deal, as being “intimidating and corrosive of the rule of law.” They also argued Meng’s arrest and detention on a U.S. warrant were unlawful because there’s no basis for her extradition to the States. (CBC News)

Canada won some support from south of the border for its handling of Meng’s case. The Senate passed a resolution, albeit nonbinding, crediting Ottawa for “upholding the rule of law and expressing concern over actions by the government of the People’s Republic of China in response to a request from the United States government to the government of Canada for the extradition of a Huawei Technologies Co., Ltd. executive.” (CBC News)

As for China, Canadian officials have struck out in their attempts to meet with their Chinese counterparts to smooth over relations—five federal ministers have asked to meet with high-level Chinese officials but their requests were ignored. (Globe and Mail)

A matter of money: Conservative leader Andrew Scheer made many bold promises around defence spending when he outlined his foreign policy platform in Montreal this week—more submarines, joining America’s missile defence system, and expanding Canada’s military mission in Ukraine, to name a few. The problem is, how would a Scheer government pay for that while committing to erase the federal deficit. As one defence expert noted: “When he starts talking about deficits, you can kiss all that goodbye. In other speeches, he talked about being a deficit hawk. That would have real implications for the defence stuff.” (CBC News)

The Trudeau insult meter: Conservative MPs appear to be engaged in a game of cat and mouse with Speaker of the House Geoff Regan over how far they can push their attacks on Prime Minister Justin Trudeau. Regan stopped Conservative MP John Brassard Wednesday after he compared Trudeau to a misleading online dating profile, saying the “guy in the profile turned out to be arrogant, self-involved and out-of-touch.” That was insulting and broke house rules, Regan said. But last week Conservative MP Michelle Rempel delivered a similar attack that the Speaker let pass, calling Trudeau “fake, self-centred and incompetent.” Also a no-go, as Conservative MP Pierre Poilievre learned last week: referring to Trudeau by his Chinese nickname Little Potato, a direct translation of the Mandarin homonym xiao tudou while his father got the nickname lao tudou, or elder spud. (Huffington Post)

Smart moooves: In P.E.I., where the Progressive Conservatives were victorious in last month’s provincial election, Tory leader and dairy farmer Bloyce Thompson emerged as the star of the campaign. As Lindsay Jones writes in the latest print issue of Maclean’s, to win Thompson capitalized on his sense of humour, knack for publicity and a love for cows—and cow photography, like the glamour pic of his cow Olivia standing in the ocean that went viral last year:

The picture gained national attention after a local freelance writer spotted it and wrote a story. It was clear that Thompson’s marketing acumen and nose for the spotlight was suited to politics, and he’d soon be seen as the guy who stands up for farmers. He got ﬁred up about public issues last fall when he led a protest of more than 100 farmers at a local infrastructure announcement to protest the NAFTA trade deal. The group shouted down the former federal agriculture minister, Lawrence MacAulay, a long-time P.E.I. MP, criticizing the Trudeau government’s concession in negotiations to open a portion of the Canadian dairy market to U.S. competition. “The Liberals threw us under the bus, it felt, as an industry,” he says.

When the PC caucus approached him to run, he agreed. Many thought it was a steep hill to climb, but about a third of families in his riding of Stanhope-Marshﬁeld, a 15-minute drive outside Charlottetown, have connections to agriculture. He ﬁgured he had a chance. (Maclean’s)