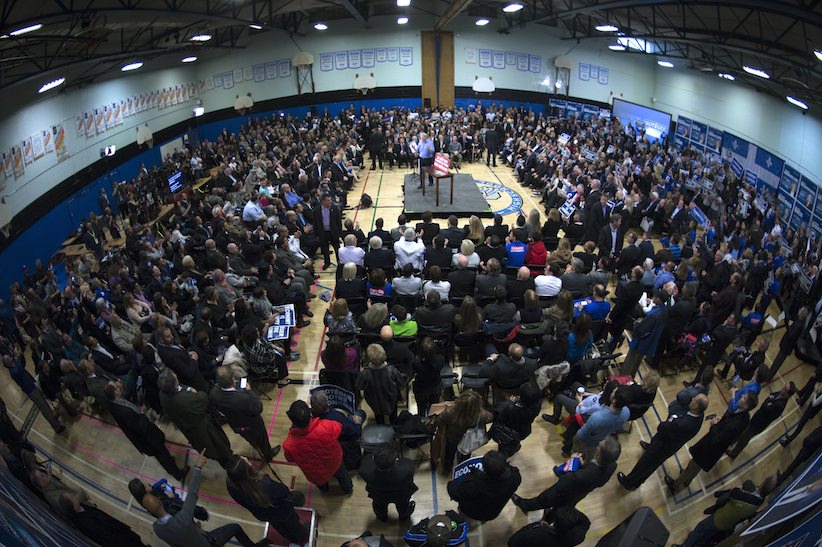 TORONTO — At Stephen Harper’s final major rally in the Toronto-area this campaign, all eyes will be watching to see how big a role the controversial Ford brothers play.

Former Toronto mayor Rob Ford, who has admitted to using cocaine, and his brother Doug are expected to be front-and-centre at the Saturday night event, following a claim by Doug earlier in the week they could get thousands of people out to support the Conservative leader if needed.

But at Harper’s first campaign event of the day Saturday, another group of political heavyweights made a rare joint appearance — Conservative senators.

Former NHL hockey coach, now Sen. Jacques Demers, former CFL player and commissioner, now Sen. Larry Smith, leader of the government in the Senate Claude Carignan, Sen. Jean-Guy Dagenais and Sen. Judith Seidman, were all introduced to warm applause from the hundreds of people who packed a high school gym in the Montreal suburb of Laval.

Smith and Demers in particular are popular among Quebecers; their past careers in hockey and football have endeared them to many people in the province.

The Senate spending scandal, however, has led to Conservative senators taking a quieter roles during this campaign compared to prior ones, when they were active participants, especially on the fundraising circuit.

Sen. Mike Duffy was dispatched to help raise money for candidates during the 2011 election and help moderate campaign events. Expenses he claimed while doing partisan work are part of the current criminal trial against him.

Other senators have shown up during this 11-week election — Sen. Denise Batters was at a Harper event in Saskatchewan, Sen. Daniel Lang at a stop in Whitehorse.

Friday night in New Brunswick, former Senate speaker Noel Kinsella and current Sen. Percy Mockler were introduced to the crowd. But Carolyn Stewart-Olsen appeared to be absent. Harper’s former communications chief was appointed a senator in 2009 to represent New Brunswick.

Stewart-Olsen’s living expenses have come under scrutiny as well; after her appointment she claimed them for a home in Ottawa she already lived in. She told the Canadian Press in 2013 she had always planned to live in New Brunswick, but she couldn’t immediately sell the home in Ottawa. During the auditor general’s review of Senate expenses, she was not among those who were required to pay back any expenses.

Just ahead of the campaign, Harper pledged a moratorium on Senate appointments pending reform of the upper chamber, provided he could get his legislative agenda passed through Parliament.

The Conservatives hold 47 Senate seats and seven are held by independents. There are 29 Liberal senators, though they have been exiled from the Liberal parliamentary caucus. There are 22 vacancies.

After past elections, Harper has used existing vacancies to appoint failed Tory candidates.

After the 2011 election, he filled one seat from Quebec with former Tory cabinet minister Josee Verner, who’d lost her seat in the NDP surge. Smith, who had been appointed to the senate in 2010, but stepped down to run in 2011 and lost, was then re-appointed to his seat.

With polls suggesting the Liberals are in the lead, many more Conservative MPs could potentially find themselves looking for new jobs after Monday’s vote.

But a Conservative government still has plenty to offer Canadians even after almost a decade in power, Harper said in Quebec on Saturday afternoon.

And during his question-and-answer session afterward, he said it has been an honour to be Canada’s prime minister, and that the country will be best served in the years to come by his own party’s recipe of balanced budgets, low taxes and freer trade.

“In the past 10 years, I believe that our Conservative party has led this country forward during a difficult time to be more prosperous, more united, more proud, more secure than ever before,” Harper said.

“If we can keep moving forward we’re going to make sure we can have an even more prosperous, prouder, more secure future for everybody in this country for decades to come.”