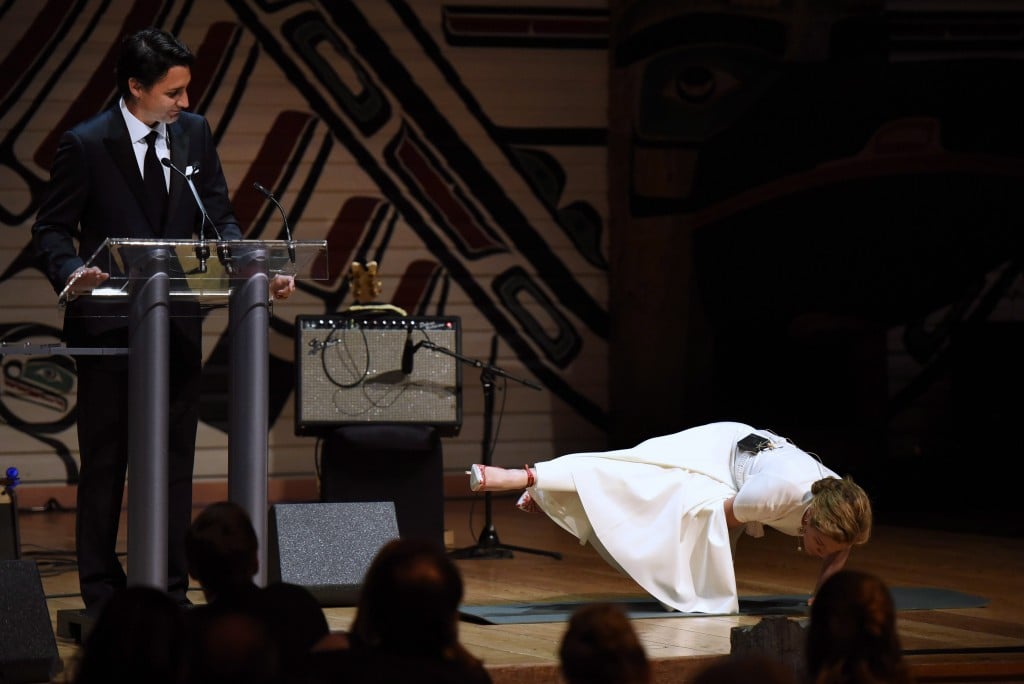 Prime Minister Justin Trudeau looks on as his wife Sophie Gregoire Trudeau performs a yoga pose as they joke on stage during the annual Press Gallery Dinner at the Museum of Nature on Saturday, June 4, 2016 in Gatineau. THE CANADIAN PRESS/Justin Tang

GATINEAU, Que. – Federal party leaders put down their swords to celebrate those who wield the pens and microphones Saturday night.

None missed an opportunity for digs at themselves, each other and the reporters they gathered to celebrate.

And neither did Trudeau’s wife, Sophie Gregoire Trudeau.

In reference to recent coverage that she needs more staff, she called four members of Trudeau’s inner circle to the stage at the Museum of History and had them unveil a yoga mat.

She then balanced herself on her arms, legs up in the air, telling her husband that was how it was done – a dig at a photo of him doing a similar move that’s been widely circulated online.

At the recent White House Correspondents Dinner, Obama had cracked a joke at Trudeau’s expense.

“In fact, somebody recently said to me, Mr. President, you are so yesterday; Justin Trudeau has completely replaced you – he’s so handsome, he’s so charming, he’s the future. And I said, Justin, just give it a rest.”

“There’s been a lot of talk about my bromance with President Barack Obama, how I look up to him, how I have so much to learn from him. And I’m like, Barack, you are absolutely right. Thank you for pointing it out, again.”

“I will miss his leadership, his good advice. I will not miss the wedgies.”

Ambrose, currently leading the Tories, made several jokes at his expense, noting his aversion to the press.

Harper never attended the dinner while serving as prime minister.

In offering up suggestions for new slogans for the current Conservatives, Ambrose suggested “the bad man is gone.”

On his way out – and choosing to hold nothing back – was NDP Leader Tom Mulcair, who declared he was different than the others because he no longer cares.

Mulcair was voted out as leader of his party at their recent convention in Edmonton but is staying on until a new one is chosen.

After a speech laden with hits at pollsters, various media outlets and himself he drew to a close.

“I have a lot more here but I was just informed in Edmonton that I have to go,” he said.

He then dropped a microphone on the stage and declared “Mulcair out.”

Also at the event Saturday was Governor General David Johnston who paid tribute to the power of the press.

This year marks the 150th anniversary of the parliamentary press gallery, which actually incorporated a year before Confederation in order to cover the fledgling government.

And the origins of the annual gallery dinner date back at least to the early 1870s, with references in some newspapers to Sir John A. Macdonald attending.

A major part of the angst for leaders and governors general is that they are expected to deliver a speech with a tricky blend of humour that is at once self-deprecating, au courant and ribald. The dinners also went on the record about 20 years ago, making the task even tougher.