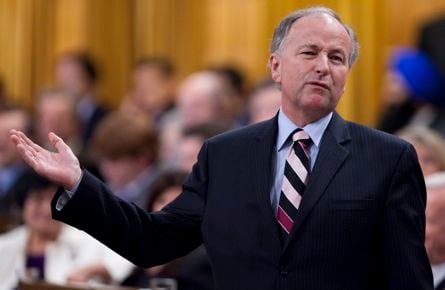 OTTAWA – If the Conservatives really want all parties to support extending and expanding Canada’s role in the war in Iraq, they should have started with a phone call, not a public pronouncement, opposition MPs complained Monday.

So until the government spells out exactly what it intends to ask for in the next stage of the Canadian effort to help battle the Islamic State of Iraq and the Levant, the NDP and Liberals won’t say whether they’ll back the government’s plan.

Foreign Affairs Minister Rob Nicholson’s office has confirmed that opposition critics will be briefed on the new motion on Wednesday.

Had Nicholson been serious about seeking all-party support for the motion, he would have reached out much sooner, said NDP foreign affairs critic Paul Dewar.

“This is all about domestic politics,” he said. “This should be about Canada’s response in a responsible way.”

The Conservatives have sought to frame the need for the mission in domestic terms; on Monday, Defence Minister Jason Kenney called ISIL a genocidal terrorist organization engaging in ethnic cleansing that has declared war on Canada.

“It’s a terrorist organization that has threatened Canadians, that is responsible for influencing the terrorist attacks that took place here on Canadian soil last year,” Kenney said during question period.

“Canadians will not sit on the sidelines of important mission to strengthen Canada and the world’s security.”

In October — prior to the attacks in Quebec and Ottawa by men aligned with radical causes — the Conservatives sought the approval of the Commons to send fighter jets, surveillance aircraft and support personnel to Iraq for a period of six months, joining Canadian soldiers already on the ground helping train local security forces.

That commitment expires in April. It’s expected the new motion will seek approval for a far longer period, perhaps as much as 11 months.

The government is also expected to announce it wants to expand the mission; Kenney has been signalling in recent days that Canadian fighter jets could join a bombing campaign in Syria, something the Harper government had said it wouldn’t do without the clear support of the country’s government — Syrian dictator Bashar al-Assad.

Parliament does not need to approve overseas military missions, but the prime minister has made it customary to ask for the support.

Expansion of the mission needs to include concrete proposals and strategy to take it beyond the bombing campaigns, Dewar said.

The NDP intends to suggest some as part of the debate. While the specifics have yet to be worked out, Dewar said those ideas will reflect testimony heard by the Commons foreign affairs committee earlier this year, including halting the flow of money into ISIL coffers and doing more to combat foreign fighters.

For the Liberals, leader Justin Trudeau is under pressure to undo the political damage he caused by joking last fall that Canada should be doing more in Iraq than just “trying to whip out our CF-18s and show them how big they are.”

The party is expected to discuss the mission during caucus meetings this week, with a focus on whether the motion will present enough of an actual strategy to defeat ISIL.

“We are clear that we are not going to speculate until we see the details of the motion itself,” said Liberal defence critic Joyce Murray.