Take a bow, Rideau Cottage. You were the backdrop for billion-dollar breathers.

Politics Insider for June 30: The latest federal pandemic projections, Canadians side with Trudeau against China and should the feds do more to repatriate Canadians stuck in Syria? 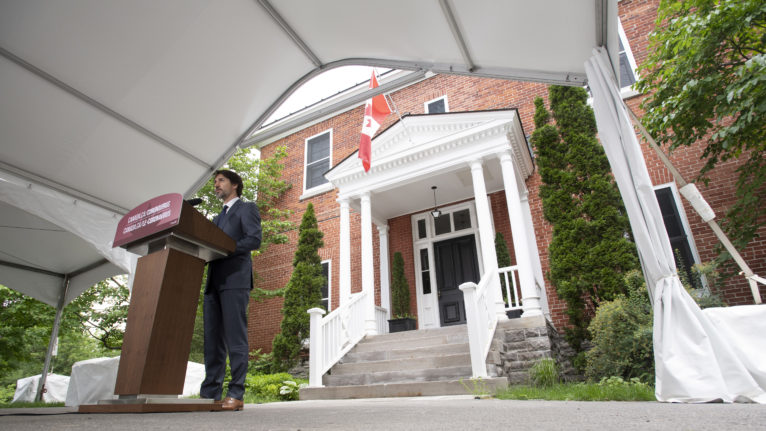 Prime Minister Justin Trudeau is seen at the podium during a news conference outside Rideau Cottage in Ottawa, Thursday, June 25, 2020. (Adrian Wyld/CP)

New federal modelling data—here are the charts—tells the story so far of Canada’s pandemic. They reinforce what most Canadians already know, which is the pandemic hit every province and territory differently. Today’s data points out that Prince Edward Island, which didn’t even merit its own chart, still hasn’t seen community transition of COVID-19. Nunavut hasn’t, to this point, recorded a single case.

Yesterday, Prime Minister Justin Trudeau announced the end of an era, of sorts. The federal government’s daily coronavirus press conferences will become sparser this summer, so don’t expect to see familiar faces like Chief Public Health Officer Theresa Tam nearly as often. If you are eager to see Chrystia Freeland, the chair of cabinet’s all-important COVID-19 committee, don’t miss her live interview with Toronto Life editor-in-chief Sarah Fulford today at 1 p.m. All the deets on how to watch are here.

A new Angus Reid poll tests the mood on the tack Trudeau is taking when it comes to freeing Michael Kovrig and Michael Spavor. The debate crystallized last week into two hardened camps: one camp argues Meng Wanzhou should be granted her freedom in exchange for the Michaels; the other argues for a tougher stance, including Magnitsky sanctions. The PM hasn’t gone that far, but he is letting the extradition process play out. Canadians overwhelmingly agree—to the tune of 72 per cent—with Trudeau’s approach. Respondents were split down the middle on whether or not Meng’s arrest was the right move in the first place.

Human Rights Watch has slammed Canada for shirking its obligations to Canadians detained in Syria because of alleged links to ISIS. A new report says Canada hasn’t repatriated 47 Canadians, including 26 children, who have been stuck in “overcrowded, filthy, and life-threatening conditions” for over a year. A five-year-old orphan named Amira, who was found “wandering alone on a road leading from the rubble of Baghouz” after her family was killed in airstrikes, is living at a humanitarian group-run “centre for unaccompanied children. Last year, Trudeau said it was “too dangerous” in Syria to save children like Amira.

Ontario’s back-to-school plan ignores a glaringly obvious problem: Kalli Anderson, writing in Today’s Parent, wonders what the heck parents are supposed to do if kids return to school on a reduced schedule. “Telling parents to prepare to send children to school half-time, without providing a hint of a plan or funding to address the obvious problem of where children will go on the off days—and who will teach and care for them on the days they aren’t in a classroom—does not get to count as “a school reopening plan,” writes Anderson.

A recent Maclean’s news meeting raised a question, apropos of nothing: How will the Canada Revenue Agency, which suspended audits in the pandemic’s early weeks, resume its work rooting out tax cheats in an era of consistent physical distancing? The CRA got back to us. The agency is “generally not conducting” nerve-wracking on-site visits (our adjective, not theirs). They prefer to work in their secure online portal. Email is a “last resort” at the taxpayer’s request. And videoconferencing is currently not an option, “due to security risks.”

The Transportation Safety Board of Canada’s latest investigation report sheds light on a tragic loss of life near Medway Harbor, N.S. in 2018. Richard Moreau and his partner, Liz O’Connell, drowned after their crabbing boat capsized less than 100 m offshore. Neither was wearing personal floatation devices at the time, and the boat was not equipped with an emergency alert system. The agency offered a stern reminder of familiar advice: always wear your lifejacket.

Worth noting: Calgary’s annual “best of” list, voted on by its own residents, is reliably a Twitter trend for the day. Maclean’s contributing editor Jen Gerson, who most recently opined on Parliament’s relationship with the word racist, was named the city’s best journalist/columnist. She beat out fellow local scribes Rick Bell and Don Braid. Bell took the honour last year, besting Gerson and Maclean’s Alberta correspondent Jason Markusoff. Back in 2018, however, Markusoff took the same award.