Judge sides with the Chronicle-Herald, dismisses bid for an injunction 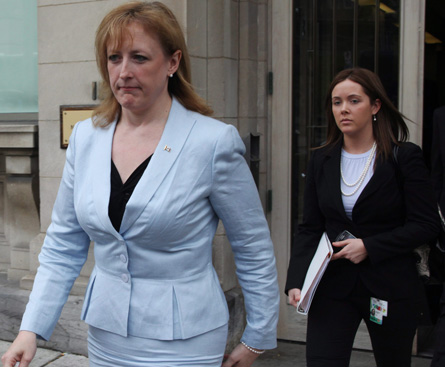 ITQ is doing her best to follow the latest tape-related controversy to ensnarl this government — Sidebar: Seriously, guys, what with Grewal, Cadman, that NDP tele-caucus call and now this, it’s turning into a running theme, like the Liberals and Things That Fly (Airbus, Pearson Airport, helicopters, Andy Scott, I could go on … ) which is why we’ve put up this handy dandy updateable post, which will be updated with all the latest developments. That’s the plan, anyway.

For up-to-the-second breaking news from the rest of the mediaverse, be sure to keep an eye on National NewsWatch, which has been on top of this story since the very beginning.

4:31:17 PM
Just to clear up a bit of (understandable) confusion: As ITQ understands it, the court has imposed
a temporary publication ban on today’s hearing — which kind of makes sense, if you think about it, since the subject under discussion is the object of the application for an injunction — but has *not* rendered a decision on the injunction itself. So when the judge rules later today, we’ll either be able to:

a) report on everything, from the contents of the tape to the arguments made against allowing the Halifax Chronicle Herald to publish the story, if he rules against both the injunction motion and the request for a publication ban

b) report on nothing at all, if he rules against both requests, or

c) report on some aspects of the case, but not others.

If the court does impose a partial ban, you can expect the lawyers for every media outlet currently in the courtroom — which seems to be most of the major networks/papers — to appeal the ruling. In other words, stay tuned. It’s going to be a bumpy ride.

5:01:20 PM
You know, I have to wonder if the minister has offered her resignation over *this* incident, or whether she’s pretty sure that this time, the prime minister would have to regretfully — or at least “regretfully” — accept.

Still waiting for details — and if you’re wondering at the lack of news coming from Halifax, it’s that darned (hopefully soon to be lifted) publication ban to blame. Nobody wants to risk raising the judge’s ire by letting slip even the most innocuous bit of inside info.

5:41:22 PM
Okay, so by a stroke of pure something, this is actually the night of the Liberal garden party – for MPs, reporters, Hill staffers; you know, the usual suspects – which is making things tricky on the logistical front.

6:09:20 PM
Still no word from the court — and again, apologies for the no-news-now updates. We’ve heard from one source inside the courtroom that the judge is saying “encouraging” things — encouraging to Team Media, that is — but no ruling yet.

6:20:04 PM
Still waiting for official confirmation, but the rumour is: DISMISSED!!! Injunction fails!

6:23:16 PM
Congratulations to the Halifax Chronicle Herald. Joseph Howe would be so proud, you guys.

6:47:15 PM
According to inside sources, the motion has been dismissed, but will be appealed. Waiting to hear what, if anything, can be reported in the meantime.

6:53:22 PM
It’s confirmed: the injunction has been thrown out. No word yet on a possible appeal.