This sort of parliamentary protest might look pointless, but MPs stagger away smiling 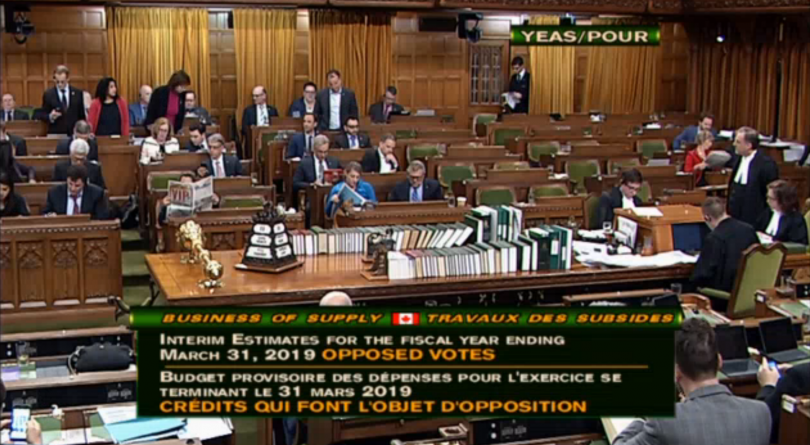 The clearest sign that the air was finally going out of the Conservative filibuster, which had kept MPs in their seats in the House all Thursday night and through most of Friday, came when Manitoba Tory MP James Bezan laid his compact travel pillow out on his desk, pulled the plug, and began deflating it.

Bezan had used the pillow, which folds neatly into a little pouch, when he grabbed an hour of sleep in the House lobby during his assigned one-hour break from marathon voting on motion after motion that his party had forced as a classic—that is, seemingly pointless—bit of parliamentary protest.

Their grievance was that the Liberals would not acquiesce to having Daniel Jean, Justin Trudeau’s national security and intelligence advisor, testify before a Parliamentary committee. It all goes back to the Prime Minister’s hapless recent trip to India, during which Jean told some reporters that elements in the Indian government might have intentionally set out to embarrass Trudeau.

Maclean’s will soon be launching a new political newsletter. Sign up now >>

Clearly, the opposition would like nothing better than to extend Trudeau’s discomfort by keeping that decidedly odd twist on the story alive. Just as obviously, there was no way the government would ever produce Jean for a committee grilling. And yet, for anyone who gets a kick out of the theatre of Parliament, the unlikelihood of this—or any—filibuster producing some worthwhile, practical outcome is beside the point.

These days, in particular, the spectacle of sleep-deprived, dishevelled MPs is a welcome reminder, at least now and then, that Parliament is a real, physical place, not a virtual space, and parliamentarians don’t only function on Twitter. Partisanship is often decried, but it’s at the heart of our democracy. Might as well face it. And there’s nothing like a good, old-fashioned waste of time on the Hill to bring that to the fore.

Typical of the spirit that prevailed on all sides by the end of this filibuster, after the Conservatives allowed it to fizzle out around 2:45 p.m., was Manitoba Liberal MP MaryAnn Mihychuk remarking, “When they blinked, maybe we should have called a few more hours of votes!”

She managed to sound simultaneously invigorated and groggy. Through the roughly 21 hours of non-stop voting, Mihychuk said she subsisted on chocolate-covered espresso beans and “dried-up quarter-sandwiches.” But, along with carbs and caffeine, MPs need distractions during a filibuster. Thus, from the press gallery, up above the Speaker’s chair, an interesting array of reading materials were visible.

Conservative MP Scott Reid could be seen, in the late going, browsing through what appeared to be a reference book, which he later confirmed was A New Dictionary of Quotations, edited by H. L. Mencken and published in 1942. Veterans Affairs Minister Seamus O’Regan had a copy of Champlain’s Dream, American historian David Hackett Fischer’s acclaimed 2008 biography of the founder of New France.

The bold blue and orange cover on Trudeau’s desk belongs to Enlightenment Now, the new bestseller on reason and science by Harvard’s Steven Pinker, the famous Canadian cognitive psychologist. Down the front bench from him, Environment Minister Catherine McKenna had a stack—she’d tweeted her plan to try to plough through as much as possible of the shortlist for CBC’s Canada Reads competition while confined to the House.

READ: Steven Pinker: The world is getting better, not worse. Seriously.

Naturally, MPs displayed a range of capacities for coping with fatigue. B.C. Liberal Stephen Fuhr, 48, a former CF-18 fighter pilot, looked remarkably fresh early Friday morning, stopping to chat with reporters, shirt untucked from his jeans, clutching in one fist a tube of Crest and a toothbrush. Not so Ontario Liberal Shaun Chen, 37, who plunked his head down directly on his House desk, appearing to fall fast asleep, as voting continued Friday afternoon. In the next seat, Quebec MP Pierre Breton paid him no mind, merely yawning and continuing to study his smartphone.

By that advanced point in the proceedings, Tory MP Robert Sopuck was absorbed in a video lecture by Jordan Peterson, the controversial University of Toronto psychology professor, on his laptop. Earlier on, Sopuck, a fly fisherman who lives in a woodsy setting near Manitoba’s Riding Mountain National Park, occupied himself by watching fly-tying how-to videos. (He wants to learn to tie certain nymphs and streamers for an upcoming trip to the Missouri River in Montana.)

Other MPs confessed they found it hard to squeeze in real reading or sustained YouTube viewing in the roughly 10-minute stretches between one recorded vote and the next, of which there were about a hundred. But, in the final analysis, most didn’t seem to mind. “This was,” summed up rookie B.C. Liberal Ron McKinnon as he walked away, “a very strong team-building moment.”

It was a typical assessment of what had just happened. Most MPs left smiling, if bleary-eyed. Tories said they had made their point, Liberals said they had stood their ground. Tricks of the filibuster trade were shared. Asked about his inflatable travel pillow, Bezan volunteered that he also relied on an eye mask when his chance to nap came around. Handy gear to keep on hand, as other MPs might want to note for next time.