John Geddes explains why dinner conversation could change everything 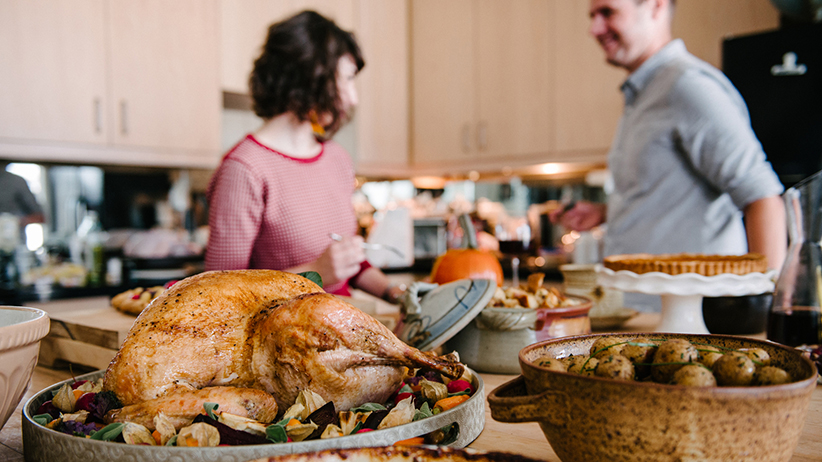 Pity the poor party strategist trying to devise the perfect campaign message for politically diverse Thanksgiving gatherings like the one Geoff Burrows, 46, of Ottawa, is hosting this weekend. I buttonholed Burrows by the Centennial Flame on Parliament Hill, where he was showing a visiting niece the capital sights, in the fall sunshine on the Thursday before the long weekend. He said he expects nine around the table, ranging in age from 10 to 50. Asked if election talk is likely, he laughed. “Given the collection of people we’ll have over, for sure,” he said. “We have a staunch Tory supporter, and me—a committed undecided voter—and my wife, who spent many years working in the youth Liberal party.”

The question of how best to lob a campaign pitch into the often multi-partisan crossfire of family chatter that’s about to go on across Canada, over turkey and pie, is taken with the utmost seriousness by party tacticians. In fact, from the outset of this unusually gruelling 11-week race, officials for all three of the main parties have, at various times, pointed ahead to Thanksgiving as the most likely time many Canadian voters will make up their minds.

“Any holiday weekend during a campaign usually is one of the key decision points, because that’s when family and friends get together and they talk, not only about what’s happening at the national level, but about where they live,” says Nik Nanos, of the polling firm Nanos Research, whose nightly tracking of voter intentions is among the most closely watched indicators of this campaign’s swings in momentum. “The coincidental placement of Thanksgiving the week before the election makes it a killer weekend,” Nanos added. “Any trend coming out of Thanksgiving is going to be hard to reverse—there’s not enough time.”

And that means developments going into the weekend—setting the table, so to speak—is crucial. Liberal polling gains in recent days, and the NDP’s drop into third place after what had seemed for weeks like a close three-way contest, may shape the discussion among those voters who’ve already decided they don’t want the Conservatives re-elected. “The first 60-odd days of the campaign has not been among the Conservatives, the Liberals and the New Democrats; it’s been about sorting though who is the challenger,” Nanos said. “It’s the Liberals, right now.”

If it turns out that Justin Trudeau’s rising support in recent days firms up over Thanksgiving weekend, that might help erase bitter memories for Liberals of how the Christmas break hurt them in the 2005-2006 campaign, which ran through the year-end break, and delivered Stephen Harper’s Conservatives their first government. What had been anticipated as a Christmas lull in that campaign turned out to be disastrous for the Liberals, but perhaps for unique reasons.

First came the tragic Boxing Day shooting of a 15-year-old student on Toronto’s Yonge Street, which might have tilted public mood toward favouring the Conservatives’ traditional law-and-order brand strength. Then news broke on Dec. 29 that the RCMP was investigating a possibly illegal leak of tax information from then Liberal finance minister Ralph Goodale’s office, putting a politically damaging whiff of scandal in the air—even though it later turned out there was no wrongdoing.

While those unforeseeable events were shaking the campaign, Harper was carefully managing holiday imagery. He turned shopping for presents into a photo-op, and invited cameras to a menorah-lighting at a Calgary rabbi’s home. For this coming weekend, the parties weren’t disclosing their plans in advance, but Thanksgiving-themed events are inevitable, especially given how all three leaders haven’t been shy lately about using their families as campaign-trail assets.

The key will be to avoid seeming too hard-hitting over three nostalgia-drenched, high-caloric days when many voters will be sensitive to any messages that clash with the warm spirit of the occasion. So attacks are likely to give way to image-burnishing ads that present Harper, Trudeau and Mulcair as gregarious family men. Still, Nanos says Twitter and Facebook remain a free-fire zone, since, unlike TV ads that can feel imposed, users of social media know they can just log off if they don’t like the tone of what they’re encountering. “I would say, in terms of activity, there’s no limit on what you’d want to do on social media—you would not be interrupting anybody’s weekend,” Nanos said.

Beyond those strategic nuances, there are two main ways to think of the weekend: either that it comes after 10 weeks of campaigning, or that it arrives with just one more week to go. Party insiders tend to see it as setting up the final push to Oct. 19. To Geoff Burrows, though, what’s come before matters more to his mood. “The never-ending campaign—I was tired of it about two weeks ago,” he said. “It’ll be nice to have a break from it, so you can sort of process it.”