Ten rules for a campaign worthy of Canadians 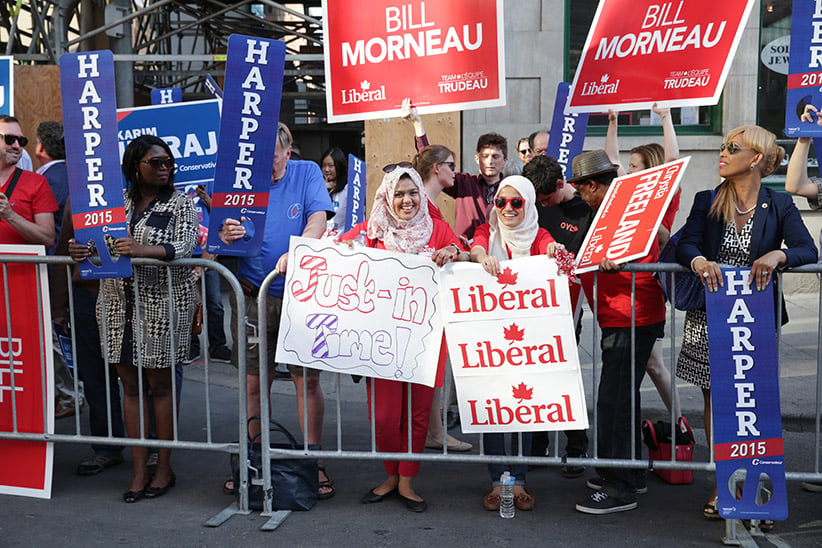 Scenes outside of the Maclean’s Leaders Debate, as the party leaders arrive, Toronto, ON, August 6th, 2015 (Photograph by Dillan Cools)

In the TV political drama The West Wing, White House press secretary C. J. Cregg bemoaned a trivial incident being reported as news: “Everybody’s stupid,” she says, “in an election year.” Charlie, the president’s body man, replied: “No, everybody gets treated stupid in an election year.”

With the first debate over and the campaign now gathering steam, sadly, it appears that C.J. was correct. But there remains time to change. Canadians can enjoy the campaign they deserve if party leaders obeyed the following rules:

1. Don’t call us voters or taxpayers. We are citizens. Citizenship is a profound concept that informs our collective identity, individual rights, and responsibilities to others. Don’t cheapen citizenship’s nobility by confusing it with voting and paying taxes. They are merely two of its duties.

2. Don’t tell us we’re choosing a prime minister. We’re not Americans picking a president or Human Resource directors involved in a hiring. Rather, we’re architects designing a House. The 338-member House we create will decide which party enjoys its confidence and that party’s leader will become ours.

Related: Our primer on coalitions

4. Don’t offer false choices. The most obvious example is the old chestnut of picking either a thriving economy or sustainable development. Respected scientists and economists have argued for years that we can have both or neither.

5. Don’t employ terms without definitions. Promising tax changes for the rich and middle class without defining either invites cynicism. Promises to help families are similarly shallow when the concept of family is so broad.

6. Don’t try to scare us. We know that foreign policy discussions must involve Canada’s support for aid, international justice, environmental stewardship, and fair trade. We know we must sometimes go to war. Please don’t pretend that foreign policy is about nothing more than tempering liberty to battle terrorism that, after all, is not an enemy but a tactic.

7. Don’t bribe us with our money. Monthly cheques for this program or that are just dribbles of our cash that you held for awhile. Come tax time, you’ll get part of it back again anyway. We are not children and our money is not your candy.

8. Don’t devalue social media. If you say something brilliant, lie, change your message in various regions, or contradict a previously stated principle, we’ll know instantly. Your TV ads won’t save you because fewer of us watch them than follow Twitter and Facebook.

9. Don’t underestimate us. Kim Campbell once said that campaigns are not a time to discuss complicated issues. The unusual length of this campaign offers a unique opportunity to prove her wrong. Trust our intelligence and attention spans by engaging us with complex ideas and grand visions. We just may surprise you.

10. Don’t forget character. Impress us by your ability to rise above empty slogans, staged events, sophomoric behaviour, and bully tactics. Speak not at us but with us. Speak with journalists who inform us. We all suffer slips of the tongue so if you commit a verbal gaffe, apologize and move on. Relax. A leader’s most important attribute is not a bursting war chest, lists of promises, strict adherence to a script, or even, forgive me, nice hair. Leadership is about character. In fact, that’s all it’s about. Show it. We’ll recognize it. We’ll reward it.

As The West Wing’s paternal chief of staff Leo McGarry once proclaimed, “We’re going to raise the level of public debate in this country and let that be our legacy.” We respect all those working to earn a seat in our House. Just imagine if party leaders, in turn, respected us by obeying the ten rules and adopting McGarry’s goal as their guide. We could then engage in a campaign worthy of Canadians.

John Boyko is the author of five books addressing Canadian history and politics with his sixth, The Kennedy Crossroads, due in February. www.johnboyko.com.