Maclean’s is your destination for the 2015 election. Start with our in-depth primers on the big issues, including terrorism

No single issue was more directly related to Justin Trudeau’s slide from first to third in most opinion polls this spring than his decision to have Liberal MPs vote for Stephen Harper’s controversial Anti-Terrorism Act, 2015, known as Bill C-51. The NDP risked being labelled soft on terror by voting against it, backed by outspoken independent critics who argued the law will chill free speech, undermine privacy, and put judges in the unprecedented position of authorizing violations of the Charter of Rights and Freedoms by Canada’s spy agency.

FEAR OF ATTACKS VS ANXIETY ABOUT RIGHTS

Canada’s security debate intensified after last fall’s attacks by Martin Couture-Rouleau in Quebec and Michael Zehaf-Bibeau on Parliament Hill, in which they targeted and killed members of the Canadian Forces. The Islamic State-inspired attacks ignited concern about homegrown terror. The government’s reaction was Bill C-51, which broadens the powers of Canada’s security agencies—without strengthening oversight.

Conservative:  The Anti-Terrorism Act will form the backbone of Conservative pledges on national security. They argue that national security agencies need to communicate more easily and disrupt terrorist activity before it inflicts harm. Tories insist that the new law protects civil liberties, and that existing oversight mechanisms are sufficient to hold security agencies to account.

NDP:  The party’s opposition to Bill C-51 might help explain its rapid ascent to the top of horserace polls during the spring and summer (an NDP win in Alberta might also have played a role). The party did offer amendments to the government’s anti-terror bill, including strengthened oversight, but refused to support the legislation without amendment.

Liberal:  In an interview with Maclean’s, Trudeau listed three things he likes about C-51: making “preventive arrest” easier when police suspect someone may be planning to carry out a terrorist activity; strengthening Canada’s “no-fly list”; and improving communication and coordination on potential threats among federal agencies. If he becomes prime minister, though, Trudeau pledges changes, including “narrowing and limiting the kinds of new powers that CSIS and national security agencies would have,” and bringing in mandatory review of the Anti-Terrorism Act every three years. As well, the Liberals would introduce oversight of CSIS by a committee of MPs.

Green:  The party’s pitch to voters on public security is mostly concerned with natural disasters—not terrorist threats and acts that were the focus of Bill C-51. The party pledges a national strategy for disaster preparedness that would include an emergency response system designed to support, for example, West Coast residents in the event of a major earthquake. The Greens oppose Bill C-51, but commit to providing existing security agencies with adequate resources to thwart terror threats. 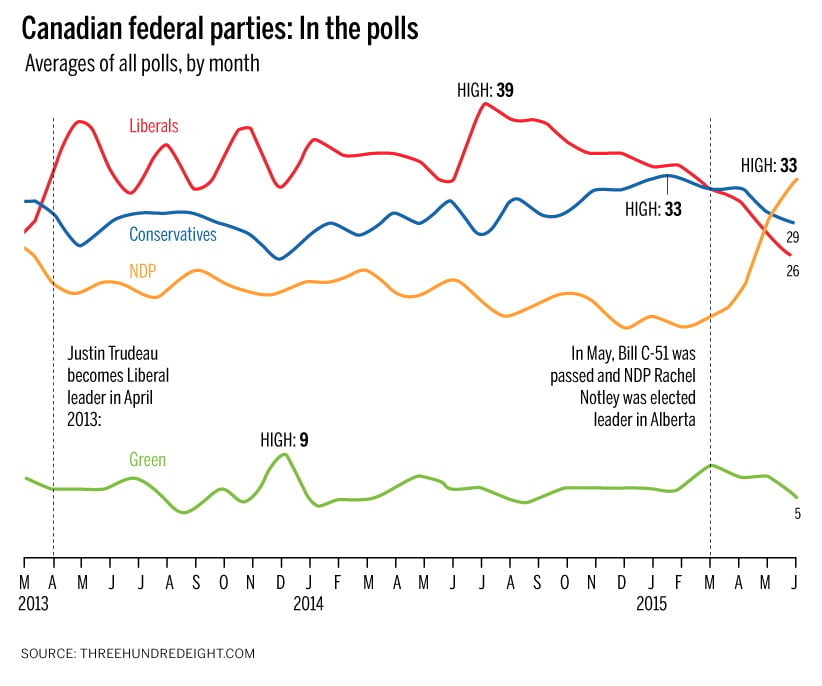 Any future Canadian government needs to demonstrate a more strategic approach to national security threats, and a better approach to lawmaking to ensure that Canadians remain convinced that a reasonable balance between security needs and rights protections have been achieved. Canadians may also feel that a future government needs to demonstrate that their security policies are generated by a vision that includes concerns about both domestic and international security. You can’t be domestically secure in a world of international instability, so Canada has a role to play.
—Wesley Wark, national security expert