Politics Insider for April 16: Kenney on track for a big win, Ontario makes its anti-carbon tax case and a new Supreme Court pick for Trudeau 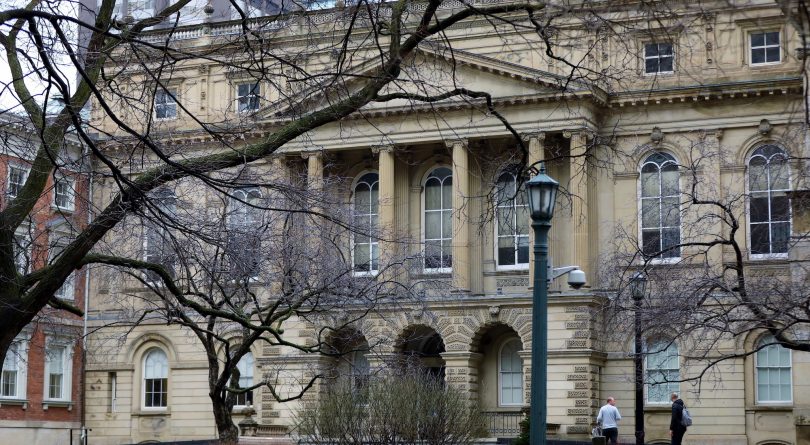 The Ontario Court of Appeal is seen in Toronto on Monday, April 8, 2019. Interested Canadians will have a rare opportunity this week to watch Ontario's top court sort out a federal-provincial legal battle over carbon pricing. It will be the first time in more than a decade cameras are being allowed in the Court of Appeal to livestream an event. THE CANADIAN PRESS/Colin Perkel

Today’s the day Alberta goes to the polls.

Of course, an unprecedented number of voters in the province need not worry—nearly 700,000 already cast their ballots in advance, three times the number who voted ahead of election day in 2015. (Global News)

While NDP Premier Rachel Notley has closed the gap with UCP Leader Jason Kenney in recent weeks, it’s almost certain she will lose her job. A vote projection compiled by 338Canada.com for Maclean’s shows Kenney with a commanding lead. “Jason Kenney will most likely become the 18th premier of Alberta,” writes 338Canada’s Philippe J. Fournier. And the odds of a majority government are “overwhelming.” (Maclean’s)

A close look at Kenney’s platform shows a few solid ideas, such as a natural gas export strategy and measures to help immigrants gain recognition of their foreign credentials, but they are drowned out by Kenney’s other cynical and ill-advised promises which he regularly screamed through megaphones to crowds of angry protestors, writes Jen Gerson. Case in point, Kenney’s vow to hold a referendum on equalization:

The UCP’s promise to hold a referendum on equalization in Alberta might be one of the most misleading and idiotic vats of snake oil ever peddled to an angry and vulnerable population on the campaign trail.

Citing the Quebec secession reference, the party claims that by holding a successful referendum, the federal government will be forced into negotiations on equalization. To say that this argument is novel is putting it mildly.

Even if a referendum did force the federal government to the table, there is nothing stopping a Prime Minister from simply saying: “Nah, we’re not changing anything. But thanks for making the trip.” (Maclean’s)

Carbon court challenge: While Alberta looks set to to elect a loud and angry opponent of carbon taxes as premier, Ontario, which already has one of those, is in court trying to kill Prime Minister Justin Trudeau‘s climate plan. Monday was the first day of Premier Doug Ford‘s carbon tax challenge in the Ontario court of appeal, which is considering whether Ottawa’s Greenhouse Gas Pollution Pricing Act is unconstitutional. Among the arguments put forward by Ontario—that giving Ottawa jurisdiction over climate change policies would allow it to regulate much of people’s lives: “They could regulate where you live, how often you drive your car. It would unbalance the federation.” (Canadian Press)

The five judge panel pressed Ontario’s lawyer on many of the province’s legal arguments, asking on several occasions what happens if a province chooses not to act to reduce greenhouse gas emissions. That’s an “unreasonably hypothetical” question, Ontario’s lawyer argued, while touting steps the province has taken to cut emissions, like scrapping coal-fired generating plants—which, of course, was an initiative of the previous McGuinty and Wynne Liberal governments. As was Ontario’s cap and trade system for pricing carbon, which Ford scrapped once elected. (National Observer)

Lawyers for the federal government are set to present their arguments today.

A new poll commissioned by Canadians for Clean Prosperity found just 27 per cent of Ontarians support the provincial government’s court challenge. Writing in Maclean’s, Clean Prosperity’s Mark Cameron and Michael Bernstein say the survey also found support for the carbon tax rises as people learn about the annual rebate that comes with it. (Maclean’s)

It wouldn’t be a day in Ottawa without at least one scoop connected to the saga that consumed federal politics for two months. The National Post reports that before former attorney general Jody Wilson-Raybould was shuffled out of her role as justice minister, her last major initiative—a directive about civil litigation involving Indigenous peoples—sparked controversy within the justice department. An internal memo the Post says circulated widely within the department last summer noted the department’s instructions to its lawyers on cases involving Indigenous peoples amounted to “litigate badly.” From the memo: “This approach decreases the likelihood of Canada mounting a successful defense to litigation or even ensuring that necessary legal issues are fully canvassed in court; while this might seem like a ‘back door’ approach to amiable settlement with Indigenous plaintiffs, such an approach might be argued to be inconsistent with democratic values and the public trust. It certainly seems to be inconsistent with upholding the rule of law, which is generally recognized as the fundamental responsibility of an Attorney General.” (National Post)

#WelcomeToCanada*: Until the Liberal government buried a series of reforms in its latest omnibus budget bill that imposed restrictions on asylum seekers—measures previously proposed by the Conservatives—Trudeau had championed the #WelcomeToCanada message at a time when so many other countries were shutting their doors to immigrants and refugees. Now with Trudeau taking a hard line, writes Matt Gurney, “are refugees now simply too politically radioactive everywhere?” (Maclean’s)

Two pieces of personal news from around Ottawa…

Supreme Court Justice Clement Gascon is set to retire from the high court in September citing family reasons. Gascon has served five years on the Supreme Court. But while the Conservatives immediately called on the government to delay the search for Gascon’s successor until an investigation is carried out into recent leaks about the Supreme Court’s appointment process, the PMO vowed to push ahead before the next election, with a source telling CBC, “We will trigger the process in the coming days. So that means yeah, the goal is before the next election because otherwise it will actually … leave an empty seat for about a year.” (CBC News)

Meanwhile Conservative MP Mark Warawa revealed he is in hospital undergoing tests to determine if he has pancreatic cancer and how far it has spread. In a Facebook post the MP for B.C.’s Langley-Aldergrove riding said he is “very sick” and asked for “prayers for a miracle.” (Canadian Press)