Politics Insider for May 3: Kenney and Ford to meet, why Trudeau's brand is in trouble and one for the wonks 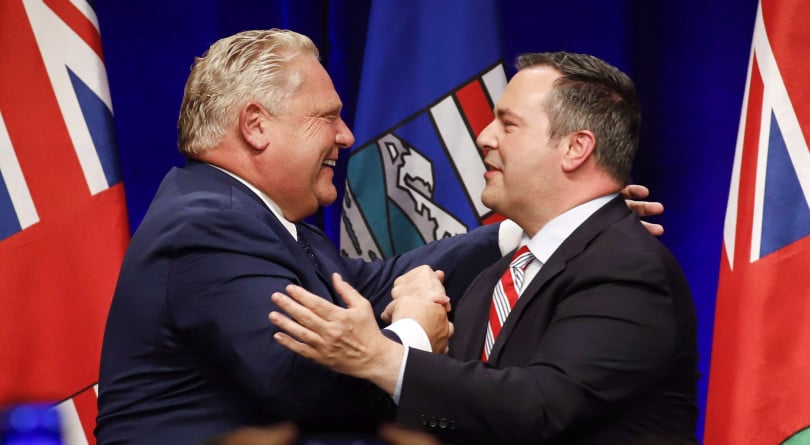 Ready for a fight: On Thursday Alberta’s crusading new premier descended into the belly of the east. On his first trip to Ottawa since he took office Jason Kenney arrived with gloves up—by mid-morning he had already mused about Alberta independence, repeated his threat to block the flow of fuel to B.C. and vowed to launch a constitutional challenge against Bill C-69, the federal government’s overhaul of environmental assessment legislation. (Toronto Star)

If someone were to make a Venn diagram of where Kenney and Prime Minister Justin Trudeau overlap, it would have the word “jobs” at its centre. “We agree on the need to create jobs in Alberta and across the country,” said Trudeau. “I know that we both share a basic goal — the creation of jobs and higher incomes for Canadians,” echoed Kenney. It’s that on just about everything else, they disagree. (Calgary Herald)

Up next on Kenney’s Ontario bucket list: a visit with his premier-in-arms, Doug Ford. The two premiers are set to meet this morning in Toronto to talk about their favourite topic—defeating Trudeau. However unlike Ford, Kenney has vowed not to waste taxpayer money on political ads to achieve that goal. (CTV News)

What’s in a name? Wednesday’s Question Period saw the Conservatives test drive a new tactic in trying to bring an end to Trudeau’s time as Prime Minister—just pretend that’s not his job. Nine Tory MPs refused to refer to Trudeau by his proper title, instead addressing him as  the “Liberal leader.” It was a clear breach of House rules of order. “Dumb move,” tweeted Keith Beardsley, a former advisor to Stephen Harper. “Respect the office. Scheer knows better and should set an example.” (Toronto Star, Twitter)

Scheer indifference: For a year Conservative leader Andrew Scheer has been promising a climate plan to counter Trudeau’s carbon tax and to date he has not delivered. But counter to what many commentators are saying, Scheer probably doesn’t need a “come-to-climate-Jesus moment” in order to win, writes Matt Gurney. That’s because Scheer’s climate ambivalence is likely driven by a cold, hard calculus—few Canadians say climate change is their top priority. (Maclean’s)

Brand Trudeau: The Prime Minister’s brand has lost its lustre and Canadians are no longer responding to the old Trudeau magic in the same way they did when he swept to power, writes Andrew MacDougall. For a party that’s so intertwined with its leader, that’s a problem:

This Liberal government has been about a man as much as it has been about a program. The world loved Canada because its glorious leader stepped out of central casting to pick up the Obama baton. That’s why the thought of diversifying away from Trudeau the celebrity Prime Minister has never been contemplated. In Trudeau the leaderification of Canadian politics has reached its high water mark in form, if not substance. Live by the selfie, die by the selfie. (Maclean’s)

Wonks rejoice, maybe: For the first time ever, Canada’s budget watchdog will have a mandate to cost out the campaign promises each party makes ahead of  October’s election. The catch? The requests for the costing analysis will come from the parties themselves, and so far only the Liberals and Greens have committed to submit their platforms to the Parliamentary Budget Officer to be crunched. The NDP will work with the PBO, but haven’t said how. As for the Conservatives, they have trust issues. (CBC News)

From gaffe to gift: If Japanese Prime Minister Shinzo Abe has any hard feelings about Trudeau twice referring to Japan as China when the two met last weekend, the master of diplomacy hid them away. Back in Japan he posted a video online showing him installing a wooden beaver door-knocker that Trudeau gave to him as a gift. (Instagram)

Yay us!: Before you begin your day, nominations for the National Magazine Awards and Digital Publishing Awards were released this week, and Maclean’s racked up 15 nominations combined. Our political coverage in particular won lots of recognition, including Shannon Proudfoot‘s preview of a Doug Ford-led Ontario, Jason Markusoff‘s chronicling of the re-emergence of a very talkative Stephen Harper as a public figure, and Paul Wells‘s column on Trudeau’s infamous state visit to India. Check out all the nominees here.