The attack on Ottawa, one year later

'One year ago today, Canada's heart and soul were attacked ... And on that day, we lost a son.' 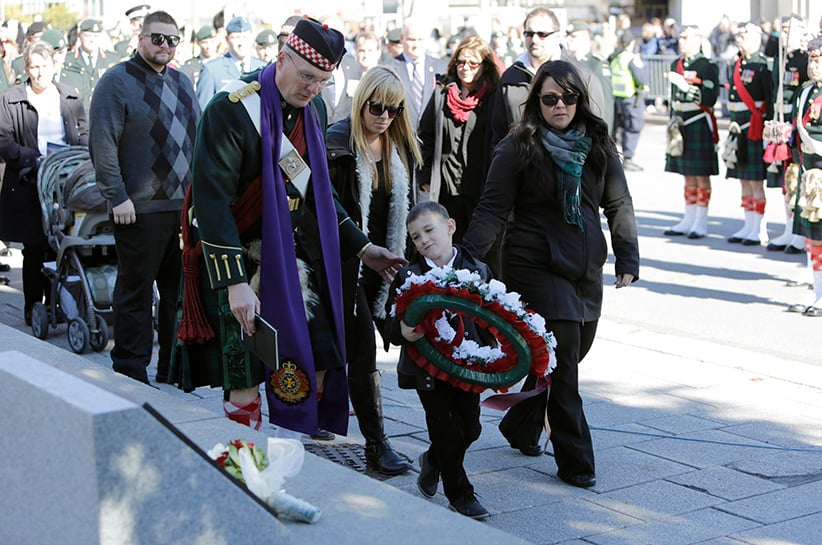 Marcus Cirillo lays a wreath in front of the plaque dedicated to his father after the commemoration ceremony to mark one year since the fatal Oct. 22, 2014 shooting of Cpl. Nathan Cirillo, at the National War Memorial in Ottawa on Oct. 22, 2015. (Photograph by David Kawai)

Awhile after the louder pomp and circumstance of the state ceremony, a plaque was unveiled under the shade of a nearby tree.

“Ladies and gentlemen, welcome. After a moving and powerful service on our National War Memorial, we now gather in more intimate confines with the family, friends and comrades of the Cpl. Nathan Cirillo,” said Erin O’Toole, veterans affairs minister for another two weeks, standing on the sidewalk that encircles the monumental island in downtown Ottawa. “One year ago today, Canada’s heart and soul were attacked. Canada’s heart, our parliamentary democracy, mere steps from here, but our soul symbolized by our National War Memorial, and the tens of thousands, over multiple generations, who gave their life in the service of our country and its ideals. And on that day, we lost a son.”

The national display had included a 21-gun salute by the 30th Field Artillery Regiment’s C3 Howitzers and a flyby of CF-18s in the “missing man” formation. In attendance were the current and next prime ministers of Canada, the chief of defence staff, the commissioner of the RCMP, the ministers of veterans affairs and public safety, the leaders of the government and opposition in the Senate, and the mayor of Ottawa. Music had been provided by the Central Band of the Canadian  Forces. Governor General David Johnston, medals pinned to his chest, his flag raised upon his arrival, inspected the uniformed contingent standing in rows, and then delivered remarks.

We have also carried on. The official business of the nation, the proceedings of the House of Commons, resumed the next day. The Hill reopened to the public on Oct. 25. Kevin Vickers became ambassador to Ireland. The hole left by a bullet in the frame of the door to the Library of Parliament was, at some point, filled in. Even as much as C-51 might have been considered a response to Oct. 22—keeping in mind that none of the new measures would have obviously done anything to prevent that attack—we shall now see how much of it a new Parliament chooses to keep.

But for the periodic sight of an officer with a very large gun—not something I recall seeing before last Oct. 22—it might be possible to go about one’s day without thinking about what happened. But there is no doubt still trauma that lingers in the mind and nerves of those that were in the vicinity. The event, or the idea of it, surely still lingers somewhere in the national consciousness.

So we might say that the symbolism and real violence of the act does not yet seemed to have altered the course or nature of this nation. But that is hardly all of it.

Around those with official titles sat both the family of Warrant Officer Patrice Vincent, killed Oct. 20 of last year, and the Cirillo family: Nathan’s mother, stepfather, two sisters and brother-in-law, a niece, a nephew and Marcus, Nathan’s son. As Johnston spoke, Marcus, his baby face broadcast widely a year ago, played with his cousin Chloe, the young girl, sitting in her mother’s lap, reaching out to put her hands in Marcus’s mouth. Marcus, his father taken away a year earlier, was restless. At one point he took a large yellow maple leaf that must have fallen from one of the trees overhead and put it inside the large white envelope he was carrying.

After officials in suits and uniforms had prepared the scene, Cirillo’s regiment marched up to the street to stand in front of the spot in the shade.

“Canada’s son,” O’Toole said, “but also a father, a brother, a son, a friend, a comrade in arms, in Nathan Cirillo. And he was struck not for who he was as a man. He was struck of the values his uniform symbolized.”

Cirillo’s mother, Cathy, came forward to unveil the monument to his death, removing the blue-and-green plaid blanket that wrapped the mounted plaque. “In honour of CORPORAL NATHAN CIRILLO,” it reads. “Killed on October 22, 2014 as he stood sentry at the sacred Tomb of the Unknown Soldier. Corporal Cirillo never left his post. Forevermore he shall stand sentry, on guard for Canada.”

She looked at it for awhile with a slight, stricken smile. She returned to her husband and wiped away tears. Then she looked away and put her face in his shoulder. 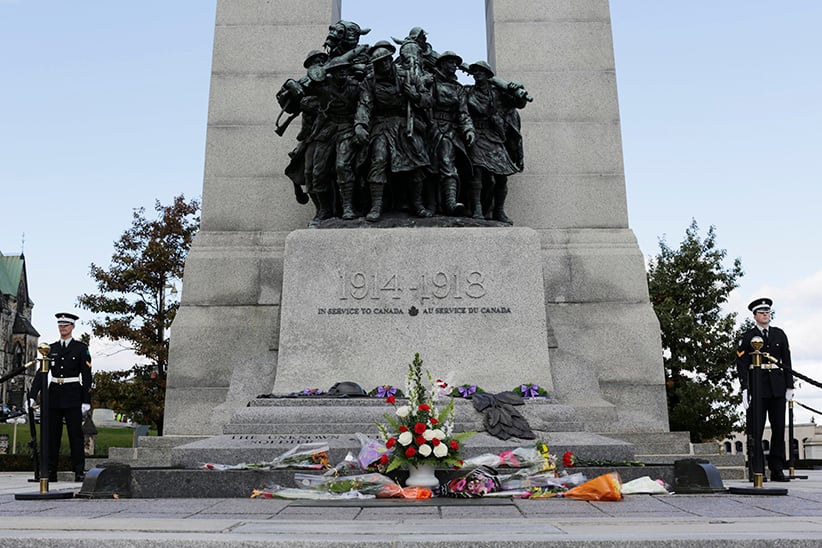 Flowers adorn the Tomb of the Unknown Soldier after the commemoration ceremony to mark one year since the fatal Oct. 22, 2014 shooting of Cpl. Nathan Cirillo, at the National War Memorial in Ottawa on Oct. 22, 2015.