It took 10 minutes, but dozens of parliamentarians stood still as they marked 150 years of governing on Parliament Hill 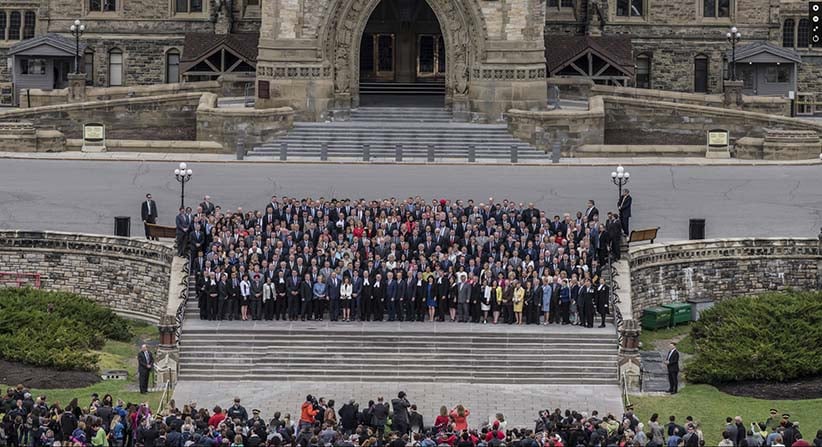 As class photos go, this one had fewer rebellious cowlicks and more high-level security concerns than most.

On Wednesday—150 years to the day after the first meeting on Parliament Hill of the legislature of the then-province of Canada—every available MP and senator filed out of their caucus meetings and perched on the steps below the Peace Tower for a massive group photo. The spectacle transfixed the tourists and school groups milling about, who instantly clustered behind the media pen and security barricade, vaguely confused but with their phones at the ready for whatever this was going to be.

Wednesday is also yoga day on the Hill, when hundreds of spandex-clad devotees gather at noon each week all summer long. In spite of the distinctly un-summery temperatures, that Zen crew was already unfurling their mats on the west lawn. In the back row of politicians, someone muttered that they had their own yoga pose: The Untrusted Parliamentarian.

With virtually every federal legislator in the land standing in one big herd out in the open, there were many more men with big guns and tiny earpieces about than usual. It wasn’t until after the rest of the group had arrayed themselves on the steps that Prime Minister Justin Trudeau strode out to take his place, squeezing into the front row between interim Conservative leader Rona Ambrose and Speaker of the House Geoff Regan. The speaker did not waste the opportunity presented by this captive audience: he began lobbying Trudeau about a video he wanted him to make for a Canada Day run in his riding. “I won’t say what else I was talking to him about, because every once in a while the Speaker has a chance to raise issues with the Prime Minister,” Regan said.

Photographer Peter Bregg had installed himself on a rooftop on Sparks Street, two blocks away, to shoot a GigaPan photo that uses a special cradle and software to stitch together 176 separate photos into one massive, high-resolution panorama. He’d never done anything quite like this before, but over a 50-year career shooting on and around the Hill, he’d come to know plenty of its prominent denizens. “We’ve had 23 Canadians serve as prime minister since Sir John A, and I have photographed 12,” Bregg says, chuckling at his own vintage. “Now, one of them was dead at the time; I covered Louis St. Laurent’s funeral.”

It would take 10 minutes for Bregg’s camera to pan across the entire scene and shoot it bit by bit. The politicians had their instructions: don’t move, or you’ll end up with two heads for all posterity. “It was pretty cool,” said Cape Breton Liberal MP Rodger Cuzner. “You go into the various parts of the precinct now, and you see these photos from years past, and you know this one here will have a place in history in some way.”

On the right side of the front row, Sen. Jim Munson was surrounded by confused chatter: What’s a pixel? How can it possibly take this long to shoot one photo? Each time a disembodied voice on a loudspeaker told the assembled politicos how many minutes they had successfully passed as statues, a groan went up from the crowd because it always seemed like time was melting. “I mean, the idea of standing still for 10 minutes?” Munson said later. “I’ve never stood still for 10 minutes in my life.” 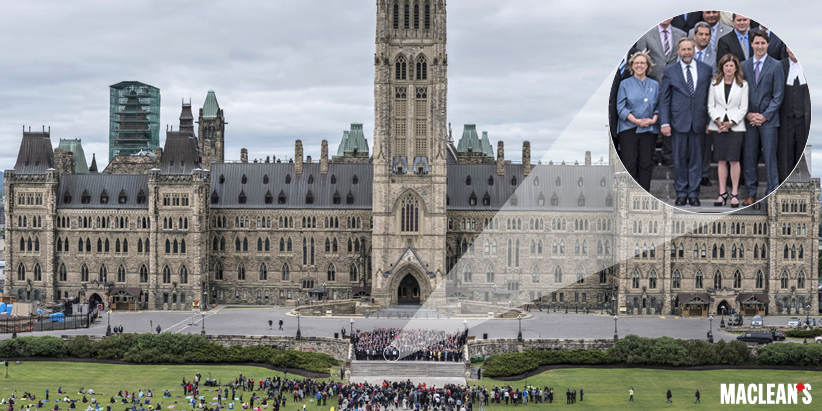 At the centre of the crowd of onlookers was a pack of school kids around 13 years old, who were fixated on the Prime Minister. “He’s right beside the white jacket,” one pointed out, referring to Ambrose’s cream-coloured blazer. At one point, the kids orchestrated themselves to scream, “Hi!” in unison and wave, trying to provoke a reaction. The photographic subjects stayed dutifully still.

As the clock struck noon, the bells of the Peace Tower bonged out across the lawn. Then the dominion carillonneur, Andrea McCrady, launched into her traditional opening number of O Canada. The MPs and senators instantly began singing along en masse, but the stately tempo of the accompaniment tripped them up a little. The slightly muddled, monotone delivery only added to the sense that this was an enormous Grade 4 class all wearing grown-up business attire. “I actually really felt quite moved by that,” Munson said. “In terms of the history of the country, it was one of the nicest class pictures I’ve ever been in.”

Way over on the far right, Larry Bagnell, Liberal MP for the Yukon, had found himself some prime real estate: he perched on the base of a lamppost all by himself, like a gargoyle. The carillonneur had crafted a playlist especially for the historic occasion, and The Log Driver’s Waltz floated out of the Peace Tower. In the media pen, a woman wearing a Senate lanyard made like a helicopter parent in the front row at a school concert, snapping rapid-fire photos and furiously waving at her special someone, trying to elicit a reaction that never came. A woman in the tourist crowd, wearing camouflage-printed pants and hat, her sweatshirt festooned in slogan buttons, yelled repeatedly at the politicians, “Thank you all!”

Finally, the voice on the loudspeakers offered her “Felicitations” and informed the group that their modern-day daguerrotype was finally done. There was a howl of giddy relief as everyone broke from their statue poses. Regan turned to trade effusive two-handed handshakes with several people around him, as though they were closing a big business deal in a stock photo.

Trudeau turned, pressed his hands together and offered a Namaste gesture to the assembled yogis, who had delayed their class until the photo was done. Then he strode down the steps toward a small crowd that trilled and rushed toward a scrawny rope barricade as soon as it became clear what direction he was headed in. You’d better believe there were selfies.

Use the embedded tool below to zoom in and out to get up close and personal and play Where’s Waldo with your favourite MP. (For best mobile experience, turn your phone to landscape.)