The by-elections: This turd won't polish either

On a night like this, I always kick off by saying: by-election results are meaningless!

Let us now parse their meaning. With thanks to University of Calgary political scientist Paul Fairie, here are the aggregate vote swings across the four federal ridings that held by-elections on Monday: 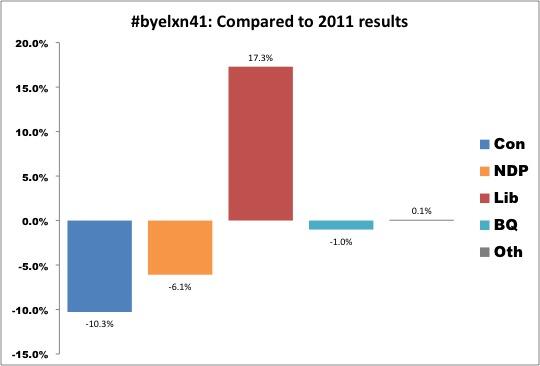 Brandon-Souris? A 21-point decline in Conservative vote and a 38-point gain for the Liberals, who ran an anonymous parachute candidate of very uncertain quality against a Conservative campaign personally spearheaded by Jenni Byrne, the Conservatives’ 2011 national campaign manager.

Since February, Stephen Harper has had one job: sort the Senate mess and give his government an image of renewed energy and purpose. He accepted his chief of staff’s resignation, then jumped into a time machine and fired him. He shuffled his cabinet (“Our renewed agenda will have new faces to bring it forward“). He delivered the longest throne speech in 20 years, a hockey book, a set of internal staff reassignments, a trade deal with Europe, a massive national clandestine radio ad campaign aimed at the best Achilles’ heel his advisors could find on Justin Trudeau, a Conservative policy convention on home turf with the most draconian media restrictions any such event has had in the history of the country, a new question-period homonculus, and some tunes. This is the result. In Brandon-Souris a 39-point Conservative advance on May 2, 2011 shrank to nearly zero last night. Harper cannot survive many more such triumphs.